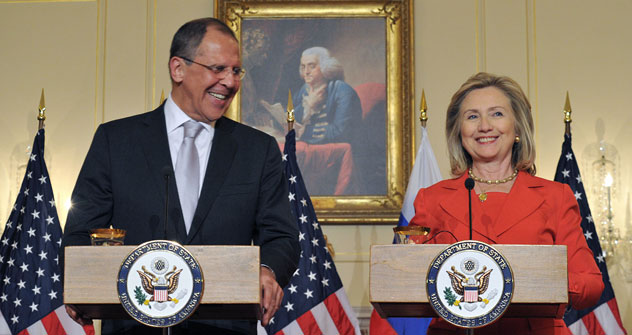 Russian Foreign Minister Sergei Lavrov and US Secretary of State Hillary Clinton speak to reporters on July 13 at the State Department in Washington, DC. Photo: AFP

Russian children who are adopted by U.S. parents will be monitored by outside agencies and remain Russian citizens until they reach 18 under a long-negotiated child adoptions treaty between the two countries.

The deal, which Russia demanded after a series of cases of neglect and death at the hands of adoptive parents, was signed by Foreign Minister Sergei Lavrov and Secretary of State Hillary Clinton in Washington late Wednesday.

It will then have to be ratified by lawmakers in both countries, which, in Russia's case, would not happen until the fall.

But Lavrov and Clinton delayed signing an agreement to ease visa rules after negotiations could not be completed in time for Wednesday’s meeting.

Child adoptions have been in and out of the spotlight in Russia in recent years, regularly fueled by new reports of U.S. abuse – even though some 13,000 cases of child abuse are reported annually in Russia, according to official statistics that get significantly less attention at home.

Lavrov threatened to ban adoptions in April 2010 after an American family sent their 7-year-old boy back to Russia unaccompanied on a plane and with a note complaining that he was psychologically unstable.

The treaty, which took seven rounds of talks to draft, establishes clearer and tighter guidelines for the adoption process and the monitoring of children.

All U.S. adoption agencies will be obliged to meet the requirements of the 2008 Hague Adoption Convention in order to work in Russia. Unregistered independent “mediators” will be banned from handling adoptions.

American families will be monitored by U.S. social services for three years after adopting a child. After that, the agency that handled the adoption will monitor the home until the child reaches 18, reporting to Russian authorities all instances of abuse, as well as the termination of an adoption or re-adoption by another family.

Another change will see the children keeping dual citizenship until they reach 18, whereas previously they were stripped of their Russian citizenship immediately after adoption.

The issue itself is no trifle: Russia is second only to China in number of children adopted by Americans, and the United States has been the top destination for Russian children since the Soviet collapse, with some 60,000 crossing the Atlantic Ocean over the past two decades, according to children’s ombudsman Pavel Astakhov.

Astakhov said in January that 17 Russian children have died in the United States as a result of abuse by their parents since 1995. Most of them were adopted through independent mediators, said children rights activist Boris Altshuler.

Altshuler praised the treaty Wednesday, saying it could help “regulate the process” and “avoid corruption,” but added that the treaty only addresses problems of a small part of the country's army of orphans, most of whom remain neglected by officials.

Stepan Artemyev, head of the Russian office of the U.S. adoption agency ABC Adoption Services, said adoption agencies also welcomed the agreement. “Of course, any change in legislature complicates the work of the agencies,” Artemyev said by telephone. “But in this particular case there is hope for a positive effect.”

Official databases list at least 130,000 children who can be adopted across Russia, according to the Education and Science Ministry, which tracks adoption statistics.

The number is not decreasing. More than 7,600 children were placed in overcrowded orphanages in 2009 when their parents were stripped of parental rights, the State Statistics Service said.

A total of 13,537 cases of child abuse were reported in Russia in 2009, the latest year for which statistics are available, Astakhov said.

Russia and the United States failed to finalize another crucial agreement, a deal to liberalize their visa regimes, in time for Lavrov's trip despite earlier promises, Rossiiskaya Gazeta reported Wednesday.

But the agreement might be signed at the meeting of the UN General Assembly in September or a Moscow trip by President Barack Obama later this year, the report said.

The agreement will introduce three-year multiple-entry visas for business travelers and tourists. It was announced by U.S. Ambassador John Beyrle last month.