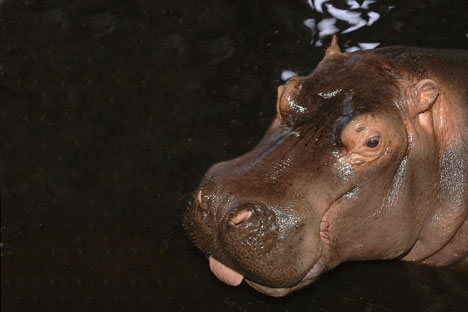 How the hippo with the toothache cut through red tape and became a star.

The story of the Kaliningrad hippo sounds a lot like a modern twist on a Russian children’s book featuring the country’s favorite fictional doctor, Aibolit.

But Glyasik the hippopotamus, a resident of the Kaliningrad zoo, is very real and until recently was in serious pain for more than a year. It seems that one of his canines started growing in the wrong direction, injuring his cheek. Glyasik appeared to be in agony. But the removal of the ill-fated tooth was not easy, and the operation was preceded by a hapless farce full of eccentric characters – customs officials, the Federal Drug Control Service, the mayor of Moscow, and even the governor, as well as journalists from various different publications.

“At first we tried to saw off Glyasik’s tooth while he was still conscious, we tied him down with rope, but as soon as we started the operation he broke the ropes and our vet narrowly missed being eaten alive,” said a staff worker at the zoo who wanted to remain anonymous. “A hippopotamus is one of the most dangerous animals. It’s a three-ton wall of muscle. If a hippo suddenly gets angry, then it can easily charge through a concrete wall. It’s pretty scary. You know I still would rather die a peaceful death.”

But Glyasik had to be saved from his misery, and possible infection and death, somehow.

The hippos have become a potent symbol of liberation at the Kaliningrad zoo. In 1945 Soviet troops took Konigsberg, and there among the ruins of the Prussian zoological garden they found Hans the hippopotamus with seven bullet wounds. The animal was then nursed back to health with a combination of distilled water, beets and vodka. The vodka proved to be especially useful, but strangely enough was not used on Glyasik for his toothache.

Hippos have become not only a symbol but also something of a tourist attraction in Kaliningrad: These animals certainly aren’t found in all zoos; there are no hippos in Moscow, for example. Kaliningrad currently has three. The eldest is Mary. At 54 years, she is the oldest hippo in Europe. She lives with her two husbands Milya and Glyasik.

“Glyasik’s tooth had been growing crookedly for some time, then two years ago the tooth started to grow into Glyasik’s cheek, and the soft tissue became inflamed. A tiny bit more and it would have gone right through! Then the whole area could have become inflamed. The animal could have died. It was already at the stage where he wouldn’t allow anyone to touch the tooth, which is a sure sign that it was hurting him”, said Anastasia Chervyakovskaya, a zoologist at Kaliningrad zoo.

Another brave soul offers to saw off the tooth

The person who volunteered to saw off the tooth was a veterinary professor from Germany. Rumor has it that the vet offered his services for free, but on one condition: he would only perform the operation if he was able to use his own anasthetic preparation – the only safe way to cut off Glyasik’s tooth was put him to sleep with a special tranquilizer, he said. But for a three-ton animal we’re talking about a very large amount of tranquillizer – about half a liter, or 17 ounces.

It would be impossible to take a dose this size through the border into Kaliningrad, a territory bordering Poland and Lithuania and separated from the rest of Russia. The penalty for transporting controlled substances is up to 20 years in jail. Moreover, the fact that these drugs would be injected could technically be construed as distributing drugs. Some might remember the story of several Moscow vets who faced criminal charges for dealing in narcotic substances.

At first, the hippo’s tooth was only a topic for discussion between government officials and the zoo staff. Finally the story became public. The “Mediapoligon” seminar for young journalists was being held in Kaliningrad. As a result the tragic story of Glyasik was published in the local paper, and from here the story made it to TV.

Then the authorities started competing with each other to show their on-air sympathy with Glyasik’s plight. On Twitter, the governor of the Kaliningrad region, Nikolai Tsukanov, promised to help Glyasik, and the mayor of Kaliningrad Aleksandr Yaroshuk visited the ill hippo in person and promised to get hold of the tranquillizing drugs in the quantity that was needed. The hippo’s plight was transformed into the perfect emergence of an animal story and political hype. People joked that it wouldn’t be long before Glyasik was handing out party membership cards for United Russia, the country’s ruling party.

However the publicity worked. The vets managed to get the anaesthetic they needed and they sawed off the tooth. Glyasik is recovering well. He is in good spirits with a healthy appetite.