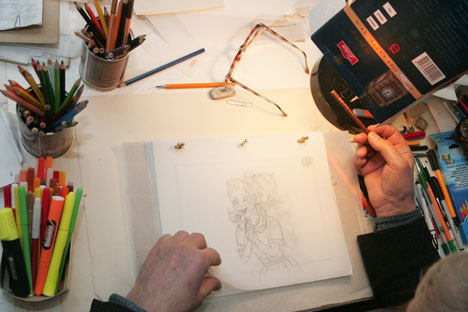 Once upon a time there was the paper kingdom of Cheburashka and Gena. It was called Soyuzmultfilm, and the characters it has created since 1936 are the icons of Soviet animation. Today, this magic kingdom celebrates its 75th anniversary in the midst of a serious economic crisis. The company is suffocating under large loans and is being crushed by the competition.

During the Soviet era, Soyuzmultfilm was a monopoly, a cartoon empire that produced its own animation and also reinvented many Western classics. From 1936 to 1991, nearly 1,500 films were made. During the height of production in the 1970s, the 200 artists employed by the studio created almost 30 films a year. Today the studio releases no more than five.

“Financing is the real problem,” said Vasily Shilnikov, director of the renamed United State Film Collection. “We must understand that there are other production studios, and that the same artists also work for them. Therefore you need to roll up your sleeves and look for new and original ideas.”

Over the course of its long history, Soyuzmultfilm has produced many animated classics, taking their themes from Russian fairy tales or the stories of A.A. Milne and Rudyard Kipling – scrupulously adapted to fit the Soviet agenda.  Indeed, many well-known Western characters have a clandestine Russian alter-ego.

The Russian version of Winnie-the-Pooh (Vinni Pukh) is a chubby, dark bear who drinks from a Russian samovar and is up to no good in a miniature world that recalls characters from Russian traditional tales.

Similarly, the adventures of Tom and Jerry provide the inspiration for the cartoon “Nu, Pogodi!” which features a battered wolf that hunts a chubby bunny with disastrous results. The cartoon’s name comes from an expression that all Russian children know, and which is roughly translated as “Well, just you wait!”

Even as the artists of the 1970s looked to the West for inspiration, the studio’s real masterpieces arose from Russian folklore, like animation master Yury Norstein’s Hedgehog in the Fog (1975).

The studio’s current project is again one that is inspired by the West, but with a Russian twist.

“We are currently working on Gofmaniada, a new film that, if all goes according to plan, should be ready by 2014,” said Shilnikov.

The film is based on the stories of German writer E.T.A. Hoffman and will be produced completely using stop-gap animation, rejecting the use of computer animation for special effects.