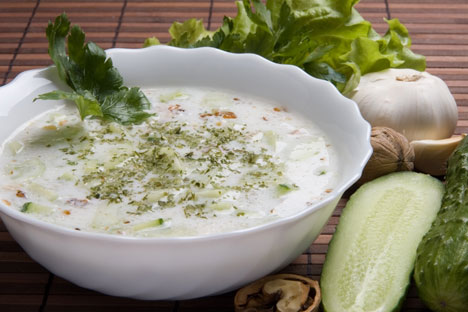 Okroshka made with kefir. Photo: Photoxpress

My “Handsome Russian husband”, “HRH” is suffering from the previous week’s excesses. He’s had too much bad food to eat, way too much alcohol to drink, not enough exercise, and is burning the candle at both ends at work. He feels awful, he says.

“Enough!” he declares on Sunday night as he watches me clean out the fridge and make a grocery list for the following day’s trip to the market. He slams down his fist on the kitchen counter and cries, “Kefir and dumbbells!” I nod absently, adding kefir to the list. We already have the dumbbells.

“Kefir and dumbbells” is the eternal Sunday night rallying cry of Russian men from Kaliningrad to Yuzhno-Sakalinsk: men who feel they need to turn over a new leaf and go on a health kick. Health is the most important, they tell themselves, as they head for the gym in a Russian Olympic tracksuit. Once there, they wander around dumbly looking at the strange machines; and finally run far too fast on the treadmill for about three and a half minutes. Gasping, they grab a barbell far too heavy for someone twice their size, and heft it up for half a rep, until, spent, they hurl it to the ground with a grunt. Recovering their equilibrium by half-heartedly watching the aerobics class going on behind a plexi-glass wall, they ultimately head, with relief and resignation, for the thing that really keeps Russian men alive:  the sauna.

The same initial enthusiasm launches the healthy diet. Wives are enjoined to fill the house with fresh fruit and vegetables and kefir, the fermented milk elixir, believed by Eastern Europeans and Balkans to contain mystical properties more powerful than penicillin. The problem is that it tastes terrible, and Russian men were not designed to subsist on it for any period of time longer than one afternoon. And that is about as long as the healthy austerity regime tends to last.

On Tuesday, faced with a fridge full of kefir and vegetables, my thoughts immediately turned to okroshka. This classic Russian cold soup is traditionally made with kvass, a fermented wheat drink, but can also be made with kefir, which is more readily available than kvass outside Russia and Ukraine, as well as being one half of the “kefir and dumbbell” recipe.

Okroshka combines the crunch of fresh vegetables with meat and eggs to create a soup that is at once refreshing and filling. Traditional recipes vary wildly in the ingredients, which I believe underscores that, “take everything left in the larder and throw it together” aspect of the soup’s origins. Regional preferences also dominate: some using tongue and sausage for the meat base, while others use smoked fish or ham. All versions contain fresh cucumbers, scallions, dill, radishes and hard-boiled eggs. “Lenten” Okroshka uses fruits such as apples and cherries. Some recipes use parboiled new potatoes, but I tend to leave these out, as they give the soup a starchy consistency that takes away from the successful mix of smooth and crunchy textures.

Keeping HRH on his regime proved easy with this healthy version of okroshka: Using low fat kefir as the base, I substituted turkey for the traditional sausage and used only one egg yolk instead of two. The fresh vegetables and copious dill did the rest, and I’m happy to say he’s ready for the dumbbells!

1. Prepare the hardboiled eggs, by boiling them in salted water for 17 minutes. Plunge the eggs into a bowl of ice water for 7 minutes. This will help to separate the egg whites and yolks, as well as preserving the yolk’s clear yellow colour. Peel and slice the eggs, separating the yolk from the white. Cube the whites and set aside.

2. Place the yolks into a large mixing bowl (you can eliminate one if you are concerned about cholesterol), and add the mustard, sugar and salt. Using the back of a spoon, blend the ingredients into a paste.

3. Using a wire whisk, slowly blend in the kefir and water into the paste; ensuring the mixture is well combined.

4. NOTE: traditional recipes for okroshka at this point add a generous dollop of sour cream. As we were trying to keep the calories and fat down to a minimum, I skipped this step, and didn’t find that the recipe suffered. The sour cream adds to the thickness of the soup, as well as giving it a lovely creamy taste and texture. You can also substitute Greek yoghurt, which gives you the creamy taste without all the calories.

5. Fold in the remainder of the ingredients, and chill for at least two hours before serving.

The great thing about okroshka is that nothing is written in stone. I’ve seen at least twenty different recipes for okroshka, using either the kvass or kefir base. I encourage you to experiment with your favorite flavors and textures to come up with your own version of this Russian classic!

Go Greek: eliminate the egg white, substituting a dollop of creamy Greek yoghurt, garlic, a cup of lemon juice and a dollop of olive oil.

Fabulously Fruity: mix fresh strawberries, cherries, peaches and other berries with cucumbers and a splash of limejuice. Substitute generous bunches of chopped mint and tarragon for the dill!