Finding what was lost 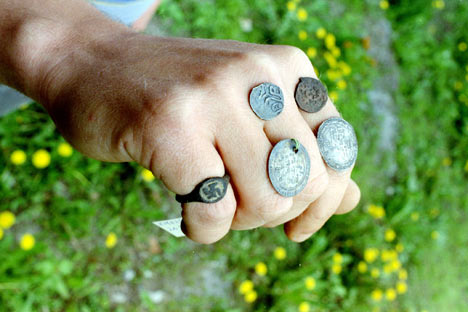 Ever dreamed of discovering treasure? Russia may just be the place to make that dream come true.

Most people dream of discovering treasure, forgetting about the daily grind and spending the rest of their lives on a tropical island. Even if you never find a trunk of pirate gold, treasure hunting can actually be a stable source of income.

Russia is one of the best places for uncovering hidden treasure. As a result of the country’s many wars, revolutions and economic crises, the number of caches stashed away for a rainy day under floorboards or in tins in the attic is truly mind-boggling. Vladimir Poryvayev, a long-time treasure hunter, says that in the late 1990s, he found a sack full of diamonds. He says he had been looking for it on behalf of some people who had heard stories of treasures from their grandparents. Poryvayev gave half of the treasure to the clients and kept the other half for himself. That was enough to turn him from a casual treasure hunter into the owner of a treasure-hunting agency. Of course, reasonable people take this whole story with a grain of salt, because diamonds are carbon elements that don’t cause a metal detector to go off.

But many other treasures do.

Coins make up the bulk of what treasure hunters find. Some of them are worth a few euros, while others can bring in a million rubles. The coins do not necessarily have to be that old; a Soviet-era copper coin may fetch more than a piece of gold. There are price listings in catalogs and on websites. Diggers also come across brooches, earrings, signet rings, bells and badges, some of which can be very expensive.

Conventional wisdom has it that treasure hunting is all about luck; however, experienced diggers know better. It is a hobby that calls for a solid education and a good knowledge of physics, physical geography, and forestry. “A digger who cannot tell the age of a forest at a glance will never go far beyond digging for coins on lawns,” said Alexei Penzensky, a professor of historical science and a treasure hunter. Knowledge of topography and its history are also a great asset. Some of this data can easily be downloaded, but some rare topographic materials are expensive or difficult to obtain. For example, a detailed map made by the Supreme Soviet of the National Economy in the 1920s is practically impossible to find.

Treasure hunters reference old maps to the modern system of coordinates looking for the vanished or deserted villages that make interesting locations for digging. Sometimes they come to a field that looks as if it had been ravaged by a three-hole punch due to the number of people who have been there before. To locate places unknown by other seekers, hunters need specialized, precise knowledge. A treasure hunter’s dream is to find a settlement that disappeared from the face of the earth before the first maps of the area were even crafted. Villages that burned down during the Time of Troubles are a perfect example. During that era, communities were being burned down one after another, but finding them is not easy.

“In ancient Rus, life was always one of two extremes: looking for water and fleeing from water. The rivers were more full-flowing then, but now they have been tamed and water is being used for irrigation. If you can read the terrain, you can determine where an old riverbed was,” said Penzensky.

Over time, a treasure hunter develops a quick, professional eye and a sense for where treasure may be hidden. First, it is usually close to human dwellings. Second, you have a better chance of finding something if you look in areas of military conflicts, abandoned settlements or along old trade routes, near way stations, and on the sites of former seasonal markets or fairs.

Diggers have their own code of honor. For example, they do not dig in places of recent battles or in graveyards. “Picking up” others’ baptismal crosses is also taboo, because by doing so you may assume others’ sins. There are plenty of stories of what has happened to people who neglected these rules.

What role does the state play if you have found something valuable? Russian law stipulates that a person who has found something valuable is entitled to half of the value, the other half, barring a previous agreement, goes to the owner of the land where the treasure was found. If the federal or municipal authorities own the land (about 90 percent of Russia’s territory), the state claims half of the treasure.

But above all, diggers should remember the old adage: If you devote your life to looking for treasure, you will die in poverty.

This is an abridged version of the original article published in Itogi.