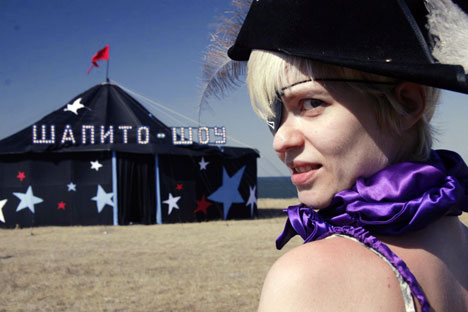 For the first time in its 33-year history, the Moscow International Film Festival was presided over by a woman – the internationally renowned Géraldine Chaplin. The daughter of Charlie Chaplin, she played “Tonya,” the wife of Doctor Zhivago, in the acclaimed American film in 1965.

Mature actresses definitely stole the show at the festival. The Stanislavsky award for acting excellence went to Helen Mirren. “I am immensely honored,” the half-Russian actress said. “It is impossible really to say how important Stanislavsky is.” Mirren acts in the new movie, “The Debt,” about Mossad agents who question the results of their own mission to kill a Nazi criminal. “Debt” closed the festival earlier this month.

The festival proved a boost for the industry. Russia was represented by two films, including one that took the Special Jury Prize, the festivals’ second-most prestigious honor.

The Spanish Film, “Las Olas” (“The Waves”) was awarded  the main prize, The Golden St. George, at the closing ceremony. But the Russian film “Chapiteau Show” also proved the critics darling, and won the jury’s special prize, The Silver St. George.

Chapiteau Show explores the underbelly of human relationships, where reality flirts with the absurd. The film was a festival favorite and during the closing ceremony, Géraldine Chaplin made what appeared to be a sincere offer to work with the director, Sergei Loban.

Loban’s Chapiteau show is a guessing-game, a riddle of a film made up of four stories. In the first, called “Love,” a likeable but lonely young woman takes an asocial geek she meets on the Internet to a city on the coast. In the story “Friendship,” a young, deaf man leaves his deaf friends to travel to the sea with a wild group of television personalities. In “Respect,” a father who reappears after an eight-year absence convinces his son to come south to the sea on a journey of personal rediscovery. Finally, in “Collaboration,” a clever producer decides to promote a look-alike of dead Russian rock legend Viktor Tsoi, and parades him like a puppet through empty concert halls in a seaside town.

The stories revolve around characters in unfamiliar terrain. They come to the terrible conclusion that they were deceived and that their exodus is more about humiliation and destruction than rescue. The main characters of each chapter show up in the other three, giving the film a dizzying unity.

The other Russian film in competition, “Heart’s Boomerang,” also created some buzz at the festival. The feature-length film from director Nikolai Khomeriki, who had two films chosen previously by Un Certain Regard (translated as A Certain Glance) at the Cannes Film Festival, also deals with the absurdity of life but in a less fantastic and appealing way. The film’s main character is Kostya, a young train driver’s assistant, who learns he is in perfect health but that his heart may stop at any time. That’s where the intrigue stops. He wanders about in an undefined landscape, a black-and-white mix of Moscow streets and the St. Petersburg metro. We never really know what time it is. The people, the places, the non-events of Kostya’s life have no hierarchy and everything seems futile and accidental. Perhaps Khomeriki wanted to visit the day one looks at mortality as a day like any other, in the emptiness of existence.

The powerful film, “Leaving,” also premiered at the festival. It is the work of Vaclav Havel, the first president of the Czech Republic — and last president of Czechoslovakia. The power of his drama is its intimacy, as it deals with the loss of power.