The hardworking women behind the matryoshkas hope for an Olympic boost 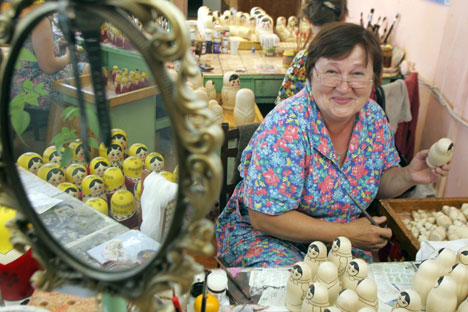 The Semyonov matryoshka nesting doll has been chosen as a souvenir for the Sochi Winter Olympics. A longtime symbol of Russia, these nesting dolls are made in the town of Semyonov by a work force of women.

A yellow headscarf, red tunic and a floral design on its apron, with its rosy cheeks and radiant look – this is the classic Semyonov matryoshka nesting doll. The dolls bring pleasure to children of all ages as they open them up, only to find smaller, but still vibrantly detailed dolls, one inside another.

The doll has been chosen as a souvenir for the Sochi Winter Olympic Games, and the artisans and workers – the women in the town of Semyonov – wonder what might be in it for them.

Chief artist Valentina Dashkova said she hopes the honor will be a boon for the town, drawing tourists in the run-up to the Olympics. Already the local authorities have spruced up the town by sprinkling newly painted images of the doll at bus stops, on buses and in other locations. At the very least, the women will see an increase in orders in the coming months.

Portrait of a hardscrabble town where matryoshkas are made

Early in the morning, hundreds of women in the town of Semyonov, located in the Nizhni Novgorod region, trudge towards the matryoshka factory. Many walk with their children and grandchildren, then drop them off at kindergarten or even take them to work. The steady stream of early-risers can make it appear as if only women and children live in this town.

“I’ve been carving matryoshkas for forty years,” said Anna Malysheva as she fixes a wood block to her lathe and begins working it, sending shavings flying everywhere. “I love my job and the smell of the lime tree."

But Malysheva said the work is grueling, and can even be dangerous. Pointing to the scars under her eyes, Malysheva said, "You’ve got to be careful not to let the wood block fly off the fastening and hit you in the face.” Malysheva also paints a bleak portrait of life in the town. “The pay is bad, so any serious man will never come to work here,” she said, adding that those that work go to Moscow. She also said that alcohol is a problem for the men who don’t work.

“Take me, I’ve brought up two sons, and when my husband would get drunk I would have to be his caretaker too. I have three grandchildren to raise now. So I will never get away from my matryoshkas.”

At the Khokhlomskaya Rospis Center, as the factory is called, nearly all of the thousand or so workers on the floor are women. The men hold most of the managerial jobs – as if often the case in Russia.

“Lathe workers are worth their weight in gold," said lathe workshop senior manager Galina Koryeva, one of the few women to reach such a position. She noted that the women who carve the dolls earn more than $400 a month, and often receive bonuses on top of that.

A feminine icon made by families of women — mothers, sisters and daughters-in law

The matryoshka is not such an old toy, but it seems to have been around forever thanks to its embodiment of Russia – fertility, motherhood, female strength and care.

The wooden dolls are scrubbed thoroughly with emery paper, coated with potato paste and dried before they go to the arts shop where the artists are all women. The enterprise hasn't had a male artisan since 1922 when it began churning out these fancy dolls in Semyonov, the center of production in Russia.

Yevgenia Prokosheva has two small children. She has been painting matryoshkas for three years. ”My mother-in-law showed me the ropes and I got a job here," she said. "Where else could I work? At a grocery store? I wouldn’t be allowed to go home if the kids got sick. Here they allow me to take sick leave, so we moms are protected at least in that way.” Prokosheva’s husband works in Moscow for weeks at a time, but her mother-in-law sits at the neighboring table.

Often, all the female members of a family work here.

Irina Polyakova, at just 19, is a talented, self-taught artist who goes to work together with her mother, an employee at the shop where they cover the painted dolls with varnish. The women work in a large open space with a lot of tables. They talk as they work and everybody hears the conversations. The women discuss their kids’ progress at school, relationships, prices, wedding dresses and, of course, they gossip.

Some have photos of themselves with celebrities. Khokhlomskaya Rospis is a tourist attraction, and local officials bring VIPs around for tours. There is little else the town can boast about. The matryoshkas have put Semyonov, and its women, on the map.

A longer version of this article was originally published in the Ogonyok.