Why Russian diamonds are so highly prized on world markets 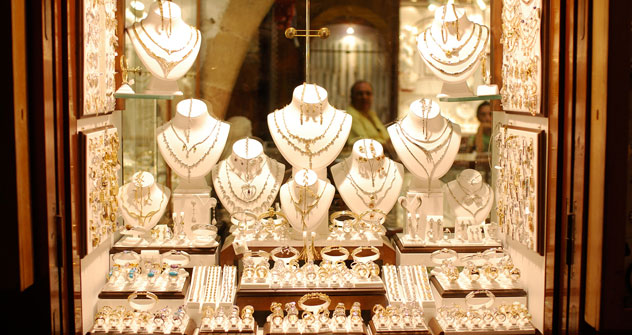 Global demand for diamonds is growing and prices are gradually returning to the pre-crisis level mainly due to soaring demand in India and China. Russia is one of the world’s main diamond suppliers. In the interview below, Valery Radashevich, member of the board of the Russian Jewellers Guild, assesses the impact of the rebounding market on the Russian jewellery industry.

Could you give me an idea of the size of the Russian diamond market?

Where in Russia are diamonds produced?

A: I should first mention former state-owned enterprises: Smolensky Kristall plant and Kristall plant in Barnaul; Kristall plant in Moscow. The latter unfortunately went bankrupt in the early years of the market economy and there are now several small firms operating on its core (in the Soviet times they all had the umbrella name Kristall). ALROSA has a diamond cutting industry in Yakutia which produces a wide range of diamonds. Another good cutting firm is Mosalmaz, and Moscow also has a large foreign company called Ruiz Diamond. All in all, there are about 50-60 diamond-cutting and polishing plants across the country. But by far the most famous, indeed legendary plant is of course in Smolensk. Along with half a dozen joint ventures with foreign companies, that cluster in Smolensk supplies very high quality diamonds.

Is the Russian diamond-cutting industry really so powerful?

That school took shape in the 1970s as the authorities paid great attention to the diamond-cutting industry. The Soviet economy required us to supply the best we had to the world market. Consequently, there were extra quality requirements to any goods that were meant for export. These criteria excluded even the slightest defects on a diamond. If a tiny speck was chipped off or there was a scratch, the diamond had to be polished smooth. The cutting and polishing quality was indeed impeccable, but at the cost of extra mass. Belgian and Israeli craftsmen do it differently - none of them would sacrifice mass, which means value. It makes no economic sense.

Why did they not give thought to such matters in Russia?

For the Soviet planned economy, the main thing was for a diamond to meet the GOST standard. As a result, the world market was divided into two camps: supporters of the “Russian cut” versus the Italians, Israelis and Indians, who used “commercial cutting” methods. The cost of a diamond produced using the Russian method is very high. For such production to be profitable, there had to be a market for such high-quality diamonds. Some famous brands like Cartier created such a market as they began buying Russian diamonds extensively. They bought “Russian-cut” diamonds because their price was well within the price parameters of jewellery for that famous brand. The result was top-class high-end goods.

And this is what we discovered at the height of Russian perestroika when we started travelling to the West to attend professional forums. The foreign jewellers asked, “How can I afford to buy your diamond if my whole product costs as much as your uncut diamond?”

At a certain point, Russian jewellers thought: we are not idiots, let’s do it like the rest of the world does. But people would approach me everywhere, at forums, and they would waylay me at hotels and airports, saying, “Sir, we beg you. ‘Russian cut’ diamonds must stay. Otherwise you will lose a huge market and we will lose unique suppliers”.

Part of the reason for these twists and turns in the jewellery industry in Russia over the past 15-20 years is that the state tried to control an industry that defies mathematics. That is why, like I said, the creation of a federal precious metal and gem stone supervisory service is a step backwards. The underlying reason is that there were no competent economists in the Soviet Union or during perestroika, and there are none today.

Have any unique diamonds been produced in Russia?

It is mostly Gokhran (the State Precious Metals and Gems Repository in Russia) that has produced unique diamonds. Even today, to get a diamond of over 5 carats, Gokhran announces a tender among the enterprises that are prepared to cut the diamond to the required criteria. Raw diamonds are bought at an auction. If, for example, you want to have a 10-carat diamond you must buy a 30-carat raw diamond.

If you come up with a large, outstanding diamond, it will either be kept by Gokhran or the Diamond Fund or, if it is a private order, it goes directly to the owner. Making such a diamond involves great responsibility and a fair amount of risk. What if the diamond cracks or something? What could bring in millions of dollars will turn to dust.

What should the consumer do to protect against buying inferior goods? What should one pay attention to in choosing a piece of jewellery?

The first rule is to choose the right shop. If you approach the show window and see that there are three or four tags on a piece (typically done on purpose to confuse the customer as to who is the actual manufacturer), ask the sales lady, “Who manufactured this ring?” If she cannot give you a straight answer, that should be a warning bell.

When you take a piece in your hands you should know the producer, and there must be a certificate.

If you go to a brand jewellery shop, be it Cartier stuff or Swiss watches, you know that this is a serious brand.

If you bought earrings by some unspecified producer for $200-$300 and you or you sweetheart likes them very much, it is no big deal. But if you want to buy something really big and costly, or a set that will be inherited by your children and grandchildren as a family heirloom, then you should proceed more carefully. Visit exhibitions, go to the producer and then you will be assured of high quality.

You cannot buy anything truly valuable and costly in an underpass, a flea market or an unnamed shop in the city outskirts. That applies not only to jewellery, but to all goods.