A book on Indo-Russian Strategic Partnership is released 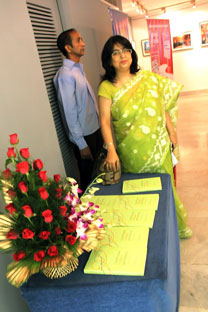 Dr. Nivedita Das Kundu at the function dedicated to the book resease.

Dr. Nivedita Das Kundu has presented her new book the Russian Centre of Science and Culture in New Delhi on July 19.

The book is the outcome of the conference titled “India-Russia Strategic Partnership: Challenges and Prospects” organized by ICWA in collaboration with the Moscow State Institute of International Relations in the Capital in November, 2008. The book deals with the entire spectrum of Indo-Russian cooperation, particularly in defence, economic and energy sectors, and their role in the contemporary world.

In her introductory remarks, Dr. Kundu said that India and Russia share similar and close geo-strategic interests, which provide the basis for their cooperation, and hoped that they can play a major role in making the world more stable and safe.

Releasing the book, the Chief Guest of the function, Mr. Kishnan Raghunath, appreciated the commendable and sincere efforts taken by the editor in making a professional approach to the significant Indo-Russian strategic partnership based on stability and continuity. The author has made a serious in-depth analysis of the subject in a friendly manner, he pointed out. He emphatically referred to the imperative of solid and substantial dialogues between the sides aimed at the qualitative improvement of multi-faceted relations between India and Russia. Mr. K. Raghunath noted that the strategic partnership is largely based on decades of evolution of fruitful relationship tested by time and dramatic events of historic dimensions.

Making his observation as the Guest of Honour, Mr. Denis Alipov, Charge d’ Affaires of the Russian Federation to India, said that ever since the signing of the Russian-Indian strategic partnership in 2000, the bilateral relationship has diversified enormously, and today it is uniquely strong and also expanding in the area of defence, nuclear energy, hydrocarbons, space research, and science and technology. He underlined the historic significance of the 1971 Soviet-Indian Treaty of Peace, Friendship and Cooperation, the 40th anniversary of which is being marked on August 9, 2011. He also referred to the new projects on bilateral relations, spanning different core sectors, envisaged in the Integrated Programme of Cooperation, signed during the visit of Russian President Dmitry Medvedev last December. Mr. Denis Alipov congratulated Dr. Nivedita Das Kundu on her excellent job.

In his presidential remarks, Ambassador Mr. Sudhir T. Devare said that the editor of the book Dr. Nivedita Das Kundu has taken persistent efforts in bringing to the fore the entire gamut of relationship between India and Russia, based on a strong national consensus in both countries, that has cut across ideologies or political differences, and the overall parallelism in the Indo-Russian relationship symbolizing the trust that exists between them. He expressed the hope that the book will fill the existing gap in the literature on this subject and provide a useful input to policy-planners, and the readers will find important information on both Indian and Russian perspectives and positions on various issues and concerns.