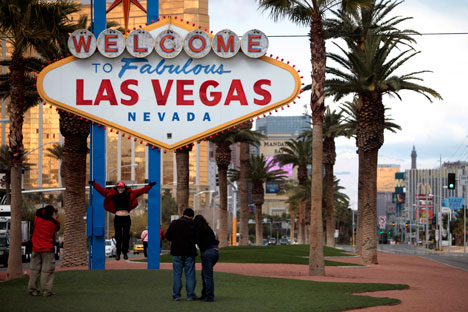 Here, where I live, there are at least 10 circuses on one street, in one city, in one country.

Las Vegas Boulevard has more entertainers who call themselves circus performers than any other street in the rest of the world. June 2011 marks the 30th anniversary of the Las Vegas show "Jubilee”, the longest-running show in town: for 30 years it has given the world brilliant dancers, adorned with feathers in their hair. There's only one problem these days: the typical Vegas 'showgirl' is now a 20-something, very short professional gymnast from Irkutsk with a hairy chest and bulging biceps. In fact the Jubilee show, no surprise here, has circus performers in between its acts to entertain the audience. One is a young man named Vitaly who twirls a cube.

In Vegas, there are Russian circus performers everywhere, not just in the 10 permanent circus show. They are in the convention centers, entertaining visitors coming to talk shop about their industries; they are in music performances. Many are retired and now work in other cities; and some have become cement masons, their major muscles getting them work in a field that is all about strength.

The odd thing is that no one knows about them. They are decked out in costumes, their shows don't mention them, and since they are not in a Moscow Circus-type show, there is no reason to expect them to develop any kind of public presence. They remind me, in many ways, of the folks who don Mickey Mouse costumes and walk through Disneyland: no one cares about the person inside the suit; they are there to make the acquaintance of a mouse.

There is big reason to care, though: These are some of the most talented people in the world, throwing triple somersaults from a trapeze some 65 feet in the air. They are doing front and back flips, performing with hula hoops, twisting themselves into contortions, and showing off some of the best juggling in the world.

How Russians got to Vegas and why they stay there is a long story that has more to do with markets than walking a tightrope. Still, among the immigrants, among those who have found employment in Vegas, there is a world full of stories, a lot of emotion, and plenty of things to discuss. What is art? What has happened to the classical circus? How have the Russian performers elevated the talent pool in a city known more for “t and a” than for beauty flying through the air.

The immigration of Russian performers to the west and what they think of Cirque du Soleil - which is not much - is in part the story of East meets West. In Vegas, as in other parts of the western world, circus is about profit. Period. Back in the Motherland, it's about art. As one circus engineer said, "Art was never meant to make money." What is the performing art of circus and why are the Russians obsess with it?

This is one of the questions I hope to address in this blog – with the aid of local Russians, of course. They have more to say about this topic than I do about them. One thing is for sure, it's here to stay.