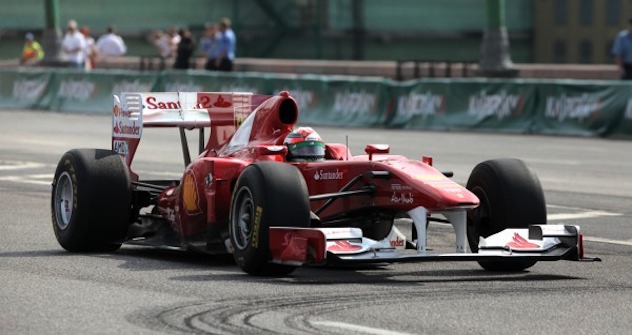 Moscow’s F1 racing show has gained momentum – to the point where it is one of the biggest events of its kind. And it is all mere preparation for Sochi’s F1 Grand Prix in 2014, the first in the country.

For one day this past weekend, Moscow’s central streets were at the mercy of powerful engines – not the other way round. Most days, even the most high-powered Ferrari engine idles lamely, humbled by the epic gridlock near the Kremlin.

Such deafening noise can only be heard in the center of Moscow on Victory Day, when tanks and other military hardware roll past the Kremlin. But on Sunday the roar of the engines was more cacophonous than the rumbling of a military parade. Formula 1 was in town, and at least 300,000 Russians came to see those tires burn. Unfortunately the tires started out in some water after heavy rains, but they quickly gained ground.

This is not the first time the city has hosted a racing show. The first one took place in 2008 and the event has been gaining momentum ever since. Moscow City Racing is now one of the biggest global events of its kind. The star of Sunday’s race was Britain’s Jensen Button; in 2010 he came to Moscow as the reigning champion, but this season he’s only in fifth place so far.

“It was great to be back,” Button said at a press conference shortly before the start. “Driving through the center of Moscow is an incredible experience. I still can’t believe that we are racing under the Kremlin walls. We look forward to Grand Prix Russia in Sochi three years from now.”

The usually smiling Brit looked rather thin when he arrived on the streets of Russia’s capital. “I lost weight,” Button admitted. “Given my height I cannot gain extra kilograms. Nothing doing. These are hard times. We work hard but so far things are not shaping up as we would like. But we are not giving up.”

The organizers added some sex appeal when they trotted out one of the most prestigious Formula 1 icons – the Ferrari. Giancarlo Fisichella may not be the brightest star in the racing world, but his car sent spectators into small swoons.

Fisichella appeared stunned by the number of journalists who were falling over themselves to cover the show. Unlike in previous years, the conference room was packed.

“This is a very important day for Russia as well as for Ferrari,” he said, unafraid to use such lofty words. “It seems we really have a lot of fans here.”

Racing along the embankment at high speed on wet roads

The route of the race was changed this year, with about 50,000 people working on it. While previously the cars practically circled the Kremlin, this year they were racing under its crenellated walls along the embankment, which they entered from Bolshoy Moskoretsky Bridge. This reduced the number of roads blocked off, making more room for public transport and traffic.

The new route is shorter than the old one (2.2. miles instead of 2.7 miles), but faster. The organizers claim that the cars could reach speeds of 186 miles per hour when they hit the straight. Not that the drivers were keen to deliver such speeds: Sebastien Ogier, one of the best rally racers of the current season, complained about the road surface on the eve of the race. “But we will give it what we can,” he said.

The weather also brought some surprises. On the eve of the race, Moscow was engulfed in sweltering heat, but on Sunday morning the city greeted the drivers with the kind of downpour that they might have experienced in Singapore. That did not deter the racing fans. The VIP stand, where one seat cost 12,000 rubles, or 425 dollars, was full. Regular ticket prices started at 1,800 rubles or 63 dollars.

Yet the view from the VIP stand was anything but spectacular. The spectators see the cars for just a few seconds before they whiz out of sight behind the turn. This may be part of the magic of Formula 1 and of car racing in general. Even a few seconds are enough to hear the piercing roar and feel the speed.

The Sochi Formula 1 Grand Prix will be the first in this country’s history. The course will be built near the Winter Olympics 2014 facilities. Construction will start as early as August and will be completed in 2013. The first Grand Prix Russia will probably take place in the autumn of 2014.

The first Russian Formula 1 racer, Vitaly Petrov, was the hero of the day in Sochi. He gave autographs, posed for photos and recalled his visits to Sochi as a child. “I came with my parents. I still have pictures of myself at age three with a monkey,” he said. Petrov said that he does not yet have a favorite course. “All [courses] are different and important. It is always good to be back on a familiar course where you know how to pass the turns. I hope that the Sochi course built for the Russia Grand Prix in 2014 will become my favorite.” And why not?