The reality of nostalgia 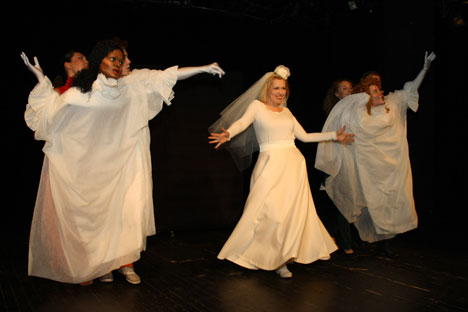 SSSR Productions invite the audience to participate in their vibrant soul-searching stage performance.

The small hall in the Moscow Theatre is packed. The lights are dimmed and, for a few seconds, nothing happens as the eyes of the audience members slowly adjust to the darkness. Suddenly, a screen lights up on stage and a piano can be heard through the speakers; Nostalgia for Reality has begun.

The play is performed by a small, five-man theatre company, which includes Alexey Rubinsteyn, an actor who simultaneously fulfils the role of director. Together with Denis Filimonov, Rubinsteyn founded SSSR Productions and gained the distinction of being the only representatives of Russian theatre to be invited to the legendary Edinburgh Festival Fringe – a feat they have already accomplished three times. ‘It is a one-of-a-kind experience,’ says Alexey, due to the fact that, at the Fringe, the audience becomes actively involved in the play without any reservations. In Russia, he continues, ‘direct interaction between actors and audience is still a foreign concept.’

During the performance of Nostalgia for Reality in the Moscow Theatre, this is painfully obvious. The audience members in the first row fall back into their seats in apprehension as a red-haired actor picks out his first ‘victim’ from the audience, taking him on stage for a dance. This happens several times over the course of the performance. ‘We are fighting for a vibrant and genuine theatre, and want to look into the eyes of the audience, to engage them in dialogue and to feel their pulse,’ explains Rubinsteyn.

The central themes of the play are hopes and fears, solitude and the desire to find one’s place in a social group. The individual monologues connect scenes, in which the actors interact with and dance around each other while they sing and hold hands, thus merging together. The actors in Nostalgia for Reality directly represent us as viewers, and we can see ourselves reflected in each of the protagonists.

‘What we are portraying is nothing new,’ says Filimonov. ‘Even if the style appears so, we are not avant-garde,’ adds Filimonov. He explained that the monologues in the performance are from classical text passages – for example, Antoine de Saint-Exupery or even from the Bible – but not every spectator notices this. Overall, it is the nostalgia for a true, honest and fulfilling life that one is reminded of and which is accentuated by music, light effects and video art. That message is driven home in the play’s conclusion. What would be considered the closing credits of a film, does not consist of names in this play, but rather of faces appearing on the screen, bit by bit, from pictures taken of the audience as they were waiting to enter the hall before the play started. The inconspicuous snapshots make us confront our individual realities in the auditorium.

Nostalgia for Reality will be performed in English at the Edinburgh Festival Fringe from 5 August to 27 August.