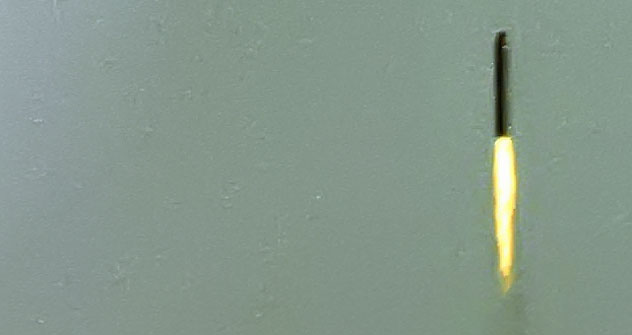 The Bulava intercontinental ballistic missile was first launched from the projected carrier: the Yuri Dolgorukiy strategic ballistic missile submarine (SSBN), Project 955, Borei Class, launched a year ago. According to the ministry of defense, in the nearest future will be launched the serial production of Bulava.

During the previous 14 trials, the Bulavamissiles were launched from another specifically modified nuclear submarine, the world’s largest SSNB Dmitry Donskoy, Project 941U, Typhoon (a.k.a. Akula) Class. True, only few of these fourteen launches were successful. Half failed completely and five more were partially successful.

The most anticipated launch – from the Yuri Dolgorukiy SSBN - should have been carried out more than six months ago, but it never was then. Allegedly, the test launch was postponed because the canal through which submarines get from the dock to the open sea was ice-bound and sailors dared not pass it in such difficult conditions. However, the excuse seemed clumsy to experts because Yuri Dolgorukiy is designed to operate in the highest latitudes under Arctic ice and even surface if necessary through found water openings or make such openings with its hull or torpedoes.

The excuse also looked lame because for the winter the SSBN was put into dry dock for commissioning operations, which suggests that either the submarine or the Bulava were not ready for the tests.

The successful launch of Bulava from the Yuri Dolgorukiy SSBN is important for many reasons.

This is not only to show skeptics that the missile has been successfully developed and can be put into service of the Russian Navy (according to senior officials of the Government and the Ministry of Defense, there must be at least five or six successful launches). This is also evidence that despite all the problems the Russian military-industrial complex can build new strategic submarines and design new strategic missiles, the basis for the national nuclear deterrent forces.

According to the Navy plans, the Project 955 SSBNs as well as their upgraded counterparts of Project 955A / 955U should be the foundation for the Russian naval strategic nuclear forces after 2018, when the Delta-III and Delta-IV (Kalmar and Murena) class SSBNs currently in active service are retired. Altogether, eight Borei class submarines are to be built. Unlike Dolgorukiy with its 12 Bulava missiles, the number two and number three hulls are to carry 16 and 20 missiles, respectively.