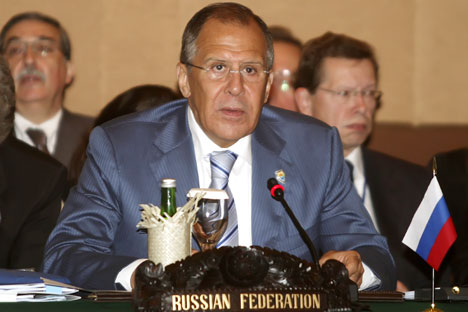 A Russian delegation led by Foreign Minister Sergei Lavrov is going to take part in a series of ASEAN meetings on the Indonesian island of Bali on July 22-23 to boost Russia's role in Southeast Asia.

The Association of Southeast Asian Nations (ASEAN) is a geo-political and economic organization of ten countries located in Southeast Asia, which was formed in August 1967 by Indonesia, Malaysia, the Philippines, Singapore and Thailand. Membership later expanded to include Brunei, Burma (Myanmar), Cambodia, Laos, and Vietnam.

This year's meeting marks the 15th anniversary of the establishment of Russia-ASEAN dialogue and partnership.

"We have come a long way over these years and have brought our relations to the highest level of cooperation," the Russian Foreign Ministry said on Thursday.

Russia will take part in the East Asian summits for the first time as a full member.

"Russia considers East Asian Summits to be a vital factor in forming a comprehensive, balanced and open architecture of the Asia-Pacific region capable of facing current security challenges," the ministry said.