Pipeline Hiatus: Amid delays in Europe, Russia looks for an exemption from new E.U. regulations 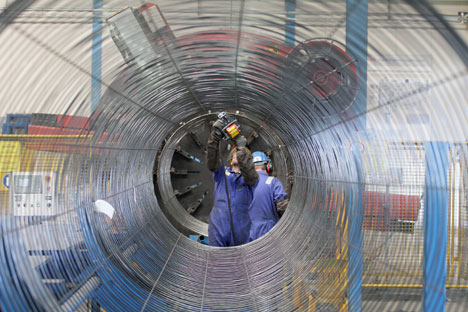 The construction of the South Stream and some Nord Stream pipelines may halt if Russia doesn’t receive special exemption from the new “third energy package” reforms.

Fewer than 20 residents of a picturesque tourist town on the Luhr River southeast of Hamburg have managed to block Gazprom’s pipeline to Europe. A German court suspended construction of the NEL pipeline, which is due to connect Nord Stream to the European gas transport system.

The pipes were coming within 150 feet of their homes. The German press has reported that the consortium laying that leg of pipes is now searching for an alternative route.

“However, that is a minor problem for Russia and its European partners; one that the lawyers should be able to handle,” said Mikhail Korchemkin of European Gas Analysis. “The main problem is that NEL is covered by the third energy package and, if the partners fail to negotiate an exception for it, similar to that obtained for Nord Stream, the project may be put on the back burner for a long time.”

The “third package,” known also as the “third way” refers to a set of gas and power market regulation and reforms that have recently been implemented in European Union countries. Its aim is to improve the security of supply to Europe and encourage national monopolies to compete with the E.U. and improve choice for consumers. The most controversial part of the third package is the grid unbundling, which essentially give more control to countries on the gas routes.

Unless NEL and South Stream acquire special status and are excluded from the third energy package, Russia may be left without the European market and Europe without Russian gas. “South Stream will go ahead only if it is awarded priority project status. If I were in Europe’s place, I would grant that status,” said Capital Investment Group analyst Vitaly Kryukov. The Moscow-based analyst stressed that the new pipeline would make Russia more dependent on the European market. Meanwhile, gas is set to play a greater role in the energy sector. In the words of the International Energy Agency report, the world has entered a Golden Age of gas.

Yet Europe is unlikely to make an exception solely for the sake of transporting Russian gas. “There is no rhyme or reason in that. Under European laws, cross-border pipelines within the European Community have to comply with certain principles of the third energy package,” said Mikhail Krutikhin, a partner with RusEnergy company.

When the South Stream project was presented in Brussels in May, Energy Commissioner Gunther Ottinger promised that the European Commission would support the Russian initiative without any strings attached. Even so, South Stream is currently covered by the third energy package, which envisages free access to pipelines for all market participants and local regulation of gas prices.

Russian Energy Minister Sergey Shmatko said that he hopes the matter can be settled. He said early results of the talks with the European Commission on special status for the project will come through this fall. One option is to recognize the pipeline as part of the Russian gas transportation system. Many experts say that, as long as South Stream is covered by the third energy package, its construction will halt. As for Nord Stream, which enjoys a special status exempting it from the third energy package, it will start transporting gas as early as October. Another branch will be added to it next year, increasing supplies to 55 billion cubic metres a year--more than 36 percent of the planned Russian gas exports to Europe.

South Stream is a more ambitious project, designed to carry about 65 billion cubic metres by 2014. If both projects are implemented, Russia will become Europe's biggest energy supplier.