A secret plan for Muammar Gaddafi 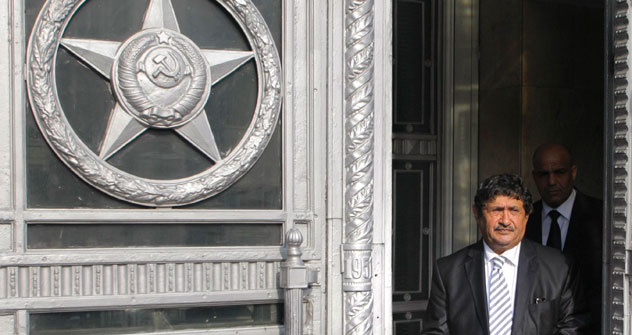 A chance to end the conflict in Libya appeared following talks in Moscow with Muammar Gaddafi's envoy, Foreign Minister Abdul Ati al-Obeidi. They lasted until late in the evening on July 20, and continued during the first half of the day on the 21st, up until the guest departed for the airport. Official reports about the results of his visit are not very informative, but certain details have come to light concerning the secret settlement plan for Libya.

The ruling five of the future Libya

International mediators, including Russia, have persuaded the warring parties to discuss the political future of Libya. This is what the guest from Tripoli discussed with his Russian colleague, Sergei Lavrov during his visit to Moscow. According to our information, the Libyan government and the rebels have agreed in principle to establish a kind of united transitional ruling council. It should include two reputable politicians from each side; these four will elect a fifth, a neutral, though influential figure that will head this transitional body.

The African Union and the United Nations -- the main mediators in the settlement -- suggested this scenario, and Russia supported it. On July 20, Lavrov had an urgent conversation with the Secretary-General's special envoy to Libya, Abdel-Elah Al-Khatib from Jordan. Having visited Tripoli two weeks ago, he was pessimistic about the prospects of a settlement. He formed this impression following talks with the Libyan prime minister and the foreign minister.

But since then, the positions of the conflicting parties have improved. The Libyans have developed a desire for peace. The main task of the mediators is to help achieve this. It would be great if other international players did not interfere with these efforts. Unfortunately, it seems that among the NATO countries taking part in the war, there are those who would like it to continue until the complete annihilation of Gaddafi himself, and his regime.

It is possible to agree on the arrest of Gaddafi

During his trip to Moscow, the Libyan foreign minister did not object to the suggested plan. He acted on instructions from Col. Gaddafi, although one of the opposition's main conditions is that neither he nor his son Saif al-Islam should take part in the proposed transitional council.

Following the rules of the diplomatic game, the Libyan foreign minister did not publicly admit that the future departure of Gaddafi from the political scene is an issue that could be resolved by peaceful means. It is a matter only of time and the guarantee of his safety. He told reporters that this issue had not even been discussed, and in this case he did not violate the truth, because these issues are more implied and read between the lines than discussed, more so now that the main goal is to end the war.

On July 20, Western capitals made several statements to the effect that Gaddafi may be given guarantees for a peaceful retirement. "One of the options discussed is that Gaddafi will stay in Libya but only if he completely removes himself from domestic political life. We are waiting for this before starting the political process for a ceasefire," French Foreign Minister Alain Juppe said on July 20.

He even hinted that with luck, the problem of Gaddafi's arrest with a warrant from the International Criminal Court may be resolved. "Certain procedures should be continued, but a decision on potential conclusions should be discussed during talks," Juppe said. White House spokesman Jay Carney reiterated the need for Gaddafi's removal from power: "He needs to remove himself from power [...] and then it's up to the Libyan people to decide."

The best scenario for ending the war

The fact that talks between government forces and the rebels have begun is testament to this much sought-after progress. The Russian president's envoy to Africa Mikhail Margelov said on July 20 that the warring factions had an important meeting in Ethiopia: "They have agreed to sit down at the negotiating table without any pre-conditions, and this is an indisputable sign of success. This is the result of several months of mediation by Russia and the African Union." He confirmed that the warring parties had worked out "an optimal ceasefire scenario for Libya."

It is worth noting that Moscow is now in contact with both sides. On July 21 the Emergencies Ministry sent an aircraft with rice, sugar and canned fish to rebel-controlled Benghazi in the east of Libya. This is the third shipment since the start of the war. Earlier in July, goods were also delivered to Benghazi, and before that humanitarian aid was sent to government-controlled Tripoli.

It's clear, though, that to stop the war in Libya it is necessary not only to reconcile the Libyans with each other but also to cool the hotheads at NATO headquarters, who are still bent on bringing the war to an unequivocal outcome, despite the emerging difficulties.

According to Anatoly Yegorin, professor of the Russian Academy of Science's Institute of Oriental Studies and the author of the newly-released book, The Unknown Gaddafi, "In that scenario, hostilities may continue for a long time. The Libyans should decide for themselves what political line to follow. It is useless to impose something external on them."

Al-Obeidi left Moscow for India in the afternoon of July 20 to continue consultations on a peaceful settlement of the conflict. The Libyan government believes influential Asian countries could join Russia and African states in an effort to persuade NATO to pursue a ceasefire.