For Russia’s journalists, often in peril, small ripples of change 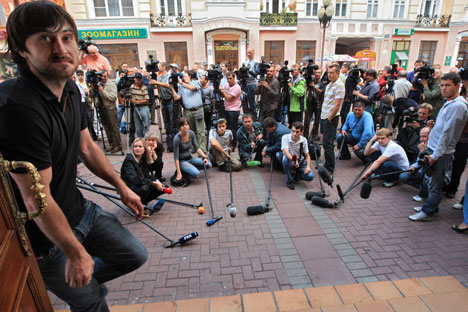 Russia has become sadly famous for the fate of its journalists who are best known as the victims of violent attacks or hapless observers sidelined by censorship. Yet some journalists suggest that since President Dmitry Medvedev was elected to the office of president, the situation appears to be improving.

Journalism can prove to be dangerous and difficult work, especially in Russia. Political pluralism remains academic and has never really been in fashion, and inquisitive reporters and other journalists who push back against the official line imposed by authorities are the frequent victims of verbal or physical intimidation, censorship or lawsuits in court. Some even pay with their lives for having tried to shed light on murky areas, for telling “secrets” or unravelling “mysteries.”

There are emblematic cases. Anna Politkovskaya was an investigative journalist for the independent Novaya Gazeta journalist when she was gunned down in 2006 in Moscow. Her murder remains unsolved; her colleagues say her penchant for focusing her talents on the situation in Chechnya and high-level corruption in the Kremlin made her a target.  Five years after the murder, Russian authorities detained a new suspect in the case last month, Rustam Makhmudov, in Chechnya.  Two of Makhmudov’s brothers were acquitted of the murder in 2009.

More recently, in November 2010, Kommersant’s special correspondent and blogger Oleg Kashin suffered a fractured skull after being beaten with iron bars. The attack was later published on the internet. Kashin had written about nationalism and the ideology of the Pro-Putin youth movement, Nashi, among other subjects. Kashin was recently sued for defamation when he said that he suspected Vasily Yakimenko, head of the Nashi youth movement, was involved in the attack.  A few weeks ago, the district court found for Kashin in the case.

Many journalists have lost their lives because of their profession. The Glasnost Defense Foundation, an NGO that defends freedom of expression, documented 322 murders of  Russian journalists between 1993 and 2009, as well as another 11 in 2010. Since the beginning of 2011, there have been 39 attacks against journalists. If these extreme cases weren’t enough, the day-to-day work of journalists is largely hindered by the general lack openness of Russia’s public system, the refusal of officials to work with the media in a transparent way and the hostility of law enforcement.

Still, some studies show an improvement in the situation. Mikhail Fedotov, the head of the president's council on human rights, said as much during a conference of the Organization for Security and Co-operation in Europe (OSCE) in Vilnius in early June. In his presentation, Fedotov showed that over the last three years, journalist safety has improved to the point where, according to his research, not one was killed between 2008 and 2010.

In addition, authorities are increasingly likely to cooperate with the media. “Progress is very slow but appreciable. Investigations on murdered journalists are moving ahead, the killers of Baburova and Markelov (a journalist with Novaya Gazeta and a human rights lawyer, respectively, both killed in broad daylight in Moscow in 2009) were convicted,” Fedotov noted, although he admitted that there is much left to do before journalists are truly protected.

Not everyone in the profession agrees that change has already occurred. “I have not seen any significant change,” said Ilya Barabanov, editor in chief of the independent magazine The New Times, which has been critical of authorities. Since 2007, Natalia Morar, the magazine’s investigative reporter covering corruption within the Kremlin, has been denied entry to Russia “Our job is intimately tied to the level of corruption with Russia’s bureaucratic system, the lack of transparency, and we are powerless in the face of institutions that do not respect our rights,” Barabanov explained.

“In the case of individual safety, the situation is alarming,” said Nadezhda Prussenkova, who writes for Novaya Gazeta. “Journalists are mistreated by law enforcement in the same way that demonstrations are forbidden, even though they are there to work.

“On the other hand, when it comes to cooperation with bureaucrats, it’s a bit better,” she added. The day after he was elected in 2008, President Dmitri Medvedev gave an interview to Novaya Gazeta, which relishes its role as a relentless critic of official abuses of power. “Officials have simply begun to respect certain laws relating to the media, and their press services to function more or less correctly,” Prussenkova explained.

She is not the only one to note this change in attitude towards journalists since Medvedev came to office. “The president immediately announced that freedom was worth more than a lack of freedom, and today, progress in safety for journalists also depends on the elections of 2012. If the country chooses a man who defends democracy, the situation will improve,” Fedotov remarked.

Alexei Simonov, the president of the Glasnost Defense Foundation, said he believes there is no significance to statistics showing fewer attacks against journalists. But he does believe Russia is experiencing a critical moment of openness: “A foothold has been created by electoral uncertainty; journalists have more freedom in the general disorder. But as soon as the duo has made its choice and the future is clearer, the screws will be tightened once again and journalists trampled upon,” he said.

Medvedev’s statements in support of freedom and democracy have hardly removed the dangers faced by journalists and the limited freedom of expression in Russia. Of course the president has said he intends to decriminalize slander, currently an offense punishable by prison time. But there remains the law on extremism, also punishable by law, which “comes into force as soon as you vehemently express an opinion that is different than that of the leadership,” Simonov said.

Despite these small ripples of change, Russia found itself ranked 140th for freedom of the press in 2010 by Reporters Without Borders (RWB), falling behind countries such as Egypt and Ethiopia, revealing there is still much work to be done. Said the RWB annual report: “The system remains as tightly controlled as ever, and impunity reigns unchallenged in cases of violence against journalists.”