A new chance for Sukhoi Company 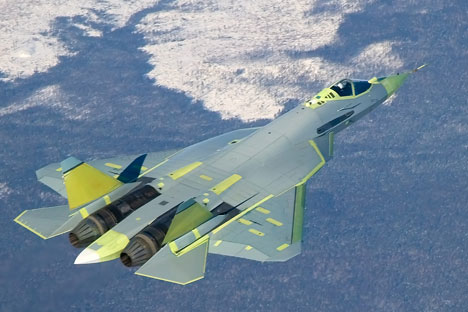 Russia's Sukhoi T-50 PAK-FA fifth-generation fighter has been placed on a short list of a South Korean tender for the delivery of advanced fighter jets, a Russian arms industry think-tank said.

Korea is seeking to buy 60 fighters with advanced stealth capability from a foreign aircraft maker in the biggest arms-procurement deal ever for the country with an estimated budget of $7.86 billion under a program code-named FX-III.

Russia's Center for Analysis of World Arms Trade cited South Korean Defense Acquisition Program Administration (DAPA) as saying that Sukhoi's fighter would compete with the F-15SE Silent Eagle from Boeing, the F-35 Lightning II from Lockheed Martin and the Eurofighter Typhoon from the European Aeronautic Defense and Space Company (EADS).

The winner of the tender is expected to be announced in 2012, but the actual deliveries may start four years later.

The Sukhoi T-50 fighter is being developed by the Sukhoi design bureau and built at a plant in Komsomolsk-on-Amur, in Russia's Far East.

The first prototype conducted its maiden flight in January 2010 and has so far carried out over 40 tests. Two more prototypes are at the various stages of testing. The Russian Air Force said it had plans to acquire over 60 T-50 fighters after 2015.

The T-50 offered to Seoul is most likely an export version of the aircraft being developed by Sukhoi and India's Hindustan Aeronautics Ltd. (HAL) under a $6-billion joint project.

Experts believe, though, that Sukhoi and EADS have little chance of winning the tender as Korea's alliance with the United States will be a decisive factor in the race.