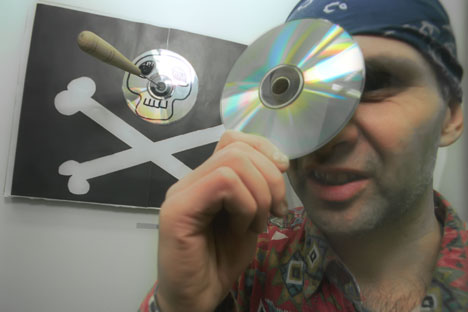 The Russian Pirate Party wants to fight illegal downloading, but the authorities aren’t making it easy.

Google founder Sergey Brin once characterized Russia as Nigeria with snow, referring to the high level of corruption. But when it comes to intellectual property, Westerners associate Russia with another African country – Somalia. Unlike their counterparts south of the Sahara, Russian pirates do not take ships hostage, but according to the rights holders of illegally downloaded music, movies and software, the damage they cause is significant. Piracy is believed to be the reason many Western media products do not reach Russia in their licensed versions. However, Russian piracy has a human face, moreover, it’s a progressive face. The pirates do believe users should pay for content – if they are able to do so.

"You see," said Stanislav Shakirov, head of the Russian Pirate Party, "There are websites such as ivi.ru, or, for example, fidel.ru. The former is a free collection of licensed movies, the latter charges for watching a certain amount of money (its subscription is about $ 20 per month). Me and many of my friends would gladly pay, for example, through pay-per-view or any other system if it is simple, convenient, at a reasonable price and there’s no need to bother with torrents."

So what's the problem?  According to statistics, the number of users on illegal content websites is constantly growing, whereas licensed online video websites cannot boast such impressive figures. A song by MC Donatello features the line: "Why on earth have they launched ivi.ru? Did they forget about torrents?" Stanislav Shakirov believes this attitude is the root of all problems. "We have no normal payment culture. Let me explain it with an example. If you download a game from a western torrent, the description of the game will certainly have a paragraph: if you like it, go and pay its creators. Western users do so in most cases. Russian users will never even think of such an idea: why pay if you already got what you need."

So present-day Russian pirates do not advocate the total absence of paid content, but instead for the revision of the current cash flow distribution system. According to them, revision is a trade-off that will satisfy everyone: It will help protect users’ rights to copyright and authors will be earning even more than today.

"There is a special organization, the RAO (Russian Authors’ Society)," said Shakirov. "It’s a giant machine with lobbyists in the government, but they are lobbying absolutely faulty laws, for example, an idea to levy taxes on each blank disk imported into the country. Yet authors get only 45 percent of the fees, the rest is used in one or another form for RAO operations. It turns out that this organization acts for anyone’s benefit but the authors’.”

Boris Turovsky, a representative of the International Pirate Party, agrees. "The problem is not only that Russian users are unwilling to pay for content, but also in the lack of normal ways to inform users that all this could be different. The older generation of musicians and filmmakers is accustomed to thinking in terms of kickbacks, so they are absolutely satisfied with the scheme proposed by RAO. Younger artists, of course, can experiment and upload an album in the Radiohead style – now you get the music and pay as much as you can. But still it will be at a loss."

Russian pirates believe there is an alternative to the current, flawed system. They say there should be competition. "The world is changing," said Shakirov. "Rights holders understand they have to look for new business models to profit – ones that would not infringe the rights of users and secure a trouble-free life for authors. For example, Mosfilm opened a licensed channel on YouTube – this is really cool, they're profiting from advertising without pay walls. But this one example is counterbalanced with hundreds of lawsuits filed by RAO for allegedly illegal playing music in restaurants."

The pirates say that support from the state is needed – in particular the abolition of criminal prosecution for breach of copyright.

"What kind of copyrights do they mean?" asked Boris Turovsky. "Russian officials ignore international free licenses." Russian legislation must respect licenses such as Creative Commons, GNU GPL/GFDL, BSD license and others, and help implement them in full. Otherwise, the International Pirate Party says, the current policy sets a double-standard. The Russian branch agrees: Reform should start from the above. This is a case where a comprehensive set of reforms is needed. Only then will the RAO monopoly be shaken, competitive business models emerge and users will finally understand what they must pay and to whom.

But the Russian government is skeptical about such initiatives. And it is clear that the authorities have no understanding of what these "angry young men" want. Not long ago, the Ministry of Justice denied the Russian Pirate Party official registration. The reason? Article 227 of the Criminal Code – which deals with specifies responsibility for an attack against a ship or riverboat.