The Bulgaria: An underwater city of the dead 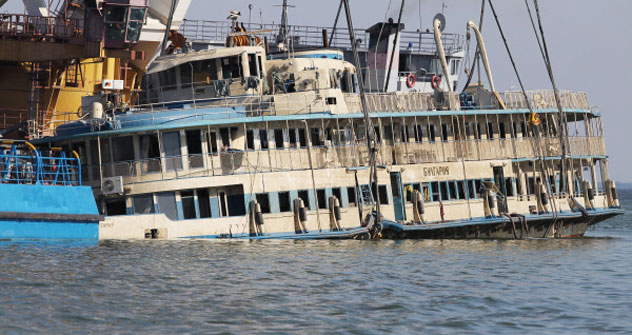 The operation to raise the ship wreckage. Source: RIA Novosti

During a cruise on July 10, the Bulgaria riverboat sank in the Volga River, killing 129 of the 208 people on board. While the disaster is being investigated, the victims of this very Russian tragedy bid a final farewell to their loved ones.

A lot of commotion hangs over the court of the forensic medical examination office. Relatives identifying bodies, receiving burial certificates and collecting what’s needed for the funeral: a coffin, plaque and cross for the Orthodox Russians; a tablet, cerement for Muslims. Hearses take the deceased to their homes and then immediately to the cemetery.

A young, beautiful woman wearing a short lilac-colored dress appears, her posture ideally straight and her legs completely stiff. As two men help her along on both sides, she keeps her eyes set straight ahead. Fidgeting with a cross on a gold chain, she leans against the wall and suddenly lets out a quiet yet ghastly wail. The men accompanying her hold coat hangers with two identical tiny suits: little white shirts and vests that are put into black bags. “Nikita Sabirov” reads one “Daniel Sabirov” reads the other. The list of casualties shows that the boys were born in 2006.

A psychologist from the Emergencies Situations Ministry, who is also a neighbor of Olesya Vedernikova, sits on a nearby bench, holding a weeping man’s hand. Vedernikova worked in the Bulgaria’s kitchen. Her family asked the man to help them retrieve her body. This was Vedernikova’s first voyage; she used to work at a factory making stuffed animals, but had not been paid on time and decided to earn some money during the summer. She and her friend Ruvina worked on the Bulgaria. Now Ruvina is waiting for Olesya’s body near her apartment building. Ruvina was able to save herself. Olesya, however, was not as lucky: a pot of boiling water tipped over on her when the boat suddenly veered sharply to the right.

Rescue divers from all over Russia were summoned to retrieve the dead bodies. While waiting their turn, they practice back at the main camp set up on the banks of the Volga. They don’t have any idea how long they are under water: they say there is no sense of time there, rather they work off how much oxygen is left in their tank. Constantine retrieved eight bodies during his shift:. After the “Bulgaria” started sinking, no one had a chance to survive. “The passengers could have held out for no more than 10 minutes. Remember that the Bulgaria wasn’t a submarine with any watertight cargo holds,” Constantine said.

Yury Kuzminsky, the rescue divers’ head doctor, says the divers’ biggest problem is low visibility where the Bulgaria went down because of the muddy bottom, river current and recent storm. “The divers cannot see beyond a few feet, so they occasionally stumble upon human corpses,” says Kuzminsky.

Meanwhile, Sergei Lebedev, the boat’s captain and one of the victims, is being buried in a nearby village.  His entire family was on board: his wife Alyona worked as a cook, daughter Dasha was a waitress and son Sasha – an aspiring sailor. They were all were lucky enough to escape. The captain’s wife and children appear tired rather than devastated with grief. This ordinary family, living in regular house, held a gathering in their father’s remembrance in a rural cafe opposite their home – just a regular rural funeral. Elderly women in the crowd are gossiping among themselves: “Did you hear that the captain didn’t want to abandon ship. He locked up himself up in his cabin and went down with the ship?”

Nobody knows how the captain died. He had been doing his best to straighten out the lurch and save people on board as long as he could, yelling: “Everybody, get on the left side of the deck!” The radio operator wanted to transmit his order via the load speakers, but the radio cabin had its electricity cut off. Twenty-three of the 35 crew members survived, while only 56 passengers out of 156 were saved.

Nikolai Dmitriev, who worked as the Bulgaria’s disco organizer, took both of his sons with him on that fateful day. The elder son helped his father by singing and dancing at the disco, while the younger one just came along for the ride. Nikolai and his sons were sleeping after dinner in a room below deck and under a staircase when women’s blood-curdling screams from the neighboring cabin woke them up. Rather drowsy, the Dmitrievs came out of their cabin. The vessel had already veered sharply to the right. The staircase leading up from the lower deck was full of people, and the Dmitrievs were the very last in line.

No sooner had they climbed to the top than a wave rolled over them like “A wall of water wall from the floor all the way up to the ceiling,” Dmitriev recalls. He was thrown to the floor and when he opened his eyes, he saw a hatch above. A second later, a sailor opened the hatch and reached out his hand to help Dmitriev out. “That was Ivan. He’s a good kid. He always went out on deck to listen to greetings for passengers. He loved songs too. If it wasn’t for him, I’d have had no chance of surviving. The problem for him was that he didn’t know how to swim.”

The Meteor riverboat sits anchored in the river port of Kazan. Ever since the Bulgaria accident, it sets sail almost void of passengers. Employees at the river port’s tourist bureau seem distressed: “People are scared. Just a week ago there was a crowd here. Now, a lot of people are returning their tickets.”

The Bulgaria’s demise is a typically Russian tragedy: in just three minutes, in broad daylight and right in the middle of the Volga river, a riverboat leased by a company not listed in the register of tourist operators, operated by an understaffed crew that had not been paid in quite a while, sank carrying a couple dozen unregistered passengers, including crew members’ numerous relatives, and sailor Ivan, who loved songs, but did not know how to swim.

This article is abridged from the original, which appeared in Russkiy Reporter.