The future of Russia’s space industry 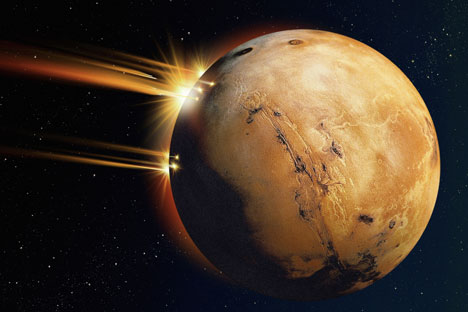 After the successful rocket launch from Baikonur Cosmodrome, the head of Russia’s Federal Space Agency (Roscosmos), Vladimir Popovkin, shared with reporters his vision of the future of Russia’s rocket and space industry. “We are working to attract private business to the space industry,” said Popovkin. “Perhaps, a number of enterprises will be re-established as a private-public partnership.” He did not go into detail about the reform, explaining that the concept is not yet fully developed.

A staff member of Roscosmos company also present at Baikonur told Izvestia that at a recent meeting Popovkin had explained his idea of a private-public partnership in quite a bit of detail.

“The idea was that because the government is investing significant funds in space projects, it is necessary to create conditions for the private sector’s involvement,” said Izvestia’s source. “As an example, he had cited projects for the creation of the GLONASS system and the Vostochny Cosmodrome (Eastern Space Centre GLONASS): we are talking about state investment in these projects in the amount of dozens of billions of rubles a year (for 2012, Roscosmos asked for 42 billion rubles as funds for the GLONASS program – Izvestia).”

While speaking of promising projects, Popovkin had cited a flight to Mars as an example which, according to the head of Roscosmos, could also be funded by large private business.

The idea to interest the private business sector in large-scale space projects is actively being promoted by the current NASA administration, headed by Charles Bolden. However, the main focus of the NASA leadership slightly differs as it suggests that the state will cease funding large-scale space projects altogether, allowing private companies to execute them instead. In February of this year NASA issued a 970-page publication titled “The Future is Mars. Brought to you and funded by Corporate America”. In essence, it is a proposal for large companies to fund a Mars mission, with a budget of $160 billion.

“The human mission to Mars can be marketed and sold as the ultimate sports and reality TV extravaganza with the conquest of an entire planet as the ultimate prize,” reads a paragraph dealing with the marketing aspect. “The $160 billion can be realistically obtained from marketing, advertising, sponsorship, the sale of exclusive broadcast and naming rights. How much would Microsoft, for example, pay to have the first spaceship to Mars be named Microsoft Explorer? Or Google to have it named Google Search Engine? $10 billion or $20 billion? How much money will the sale of broadcast rights, logos and merchandise raise?”

Apparently, the head of the Russian Federal Space Agency shares NASA’s ideas about the future of space exploration and the growing role of private business in its funding. According to the executive director of the space technologies and telecommunications cluster of the Skolkovo Foundation, Sergey Zhukov, in certain aspects, Russia’s private business is today already able to participate in space programs.

“As an example, we could cite the Gazprom Space Systems company, which has already created a telecommunications system based on its own satellites and is now creating its own Earth remote sensing system (RSS),” says Zhukov. “The two areas, telecommunications and RSS, are most attractive for private companies. Also the navigation segment is actively being developed by private entities. Speaking of prospects, I think that Russia’s private business is able to take on certain projects, such as the creation of ultra-light launch vehicles.”

The possibility of a private-public partnership in large-scale space exploration projects, according to Sergey Zhukov, is unclear due to the position of major space corporations. In order to improve the situation, state-owned companies need to make some concessions. There have already been instances when interested private companies approached major state-owned enterprises with project proposals, but the latter did not show sufficient flexibility. “You can give us the money and not worry about anything else” was the gist of the conversation. Therefore, successful application of the private-public partnership experience in the rocket and space industry calls for the improvement of the legal foundation, which needs to outline the rules of the game, creating conditions for a successful implementation of the idea of a private-public partnership.