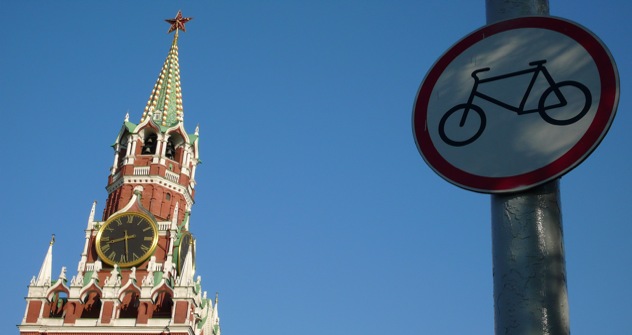 Muscovites are happy to take their bicycles to the forest, but are they ready to ride in the city?

While in Paris or Amsterdam, cycling to a business meeting is a common occurrence, it is still considered an oddity in the Russian capital. Moscow is thought to be incompatible with the bike – streets dotted with cars, pedestrian walkways in place of bicycle lanes and a lack of special parking areas seem to be the fate of Muscovites. But over the last two years, bicycle sales have surged in Moscow’s sporting goods stores. Where do Moscow’s cyclists ride?

It is rare to see anyone riding a bike in central Moscow. The only exception is migrant workers, who can’t afford a car or even public transport; they pedal their Soviet brand bikes to get to work, wearing their orange vests.

Outside of this, the heaviest flow of bicycles in Moscow can be observed on Friday nights –fastened to the top of private cars as Muscovites rush to the country to cycle in the forests.

For Russians, it seems that cycling is a popular recreational activity, rather than a mode of transportation.

And yet some cycling sanctuaries do exist in this city, albeit a small number, with lots of space for biking and good sights. Here are some of the most popular routes:

Most tourists are familiar with Sparrow Hills Park thanks to its observation deck, which provides one of the best panoramic views of Moscow. The main building of Moscow State University, one of the seven Stalin-era skyscrapers sometimes known as the Seven Sisters, is also located in the same area.

Cyclists ride down the park’s steep and gently sloping descents. Beyond that, a 2.5-km cycling path with special coating and markings runs alongside the Luzhniki embankment between the Vorobyovy Gory metro station and the Multisport recreational facility.

Despite plenty of space and an abundance of paved paths, it’s not particularly easy to ride a bike in Gorky Park, given the large crowds of people and children shuffling between numerous attractions.

Adjacent to Gorky Park is Neskuchny (“not boring”) Public Garden – the oldest green area in the center of Moscow, established as early as the mid-18th century. Today it looks more like a wild forest: The trees have branched out, stone sculptures have been reduced to ruins, and the pond has become overgrown with duckweed. This keeps it from being one a popular place for leisurely strolls and makes it possible to ride bikes here.

The Neskuchny Public Garden spreads out along the Pushkinskaya embankment. A cycling lane running across the garden leads to Gagarin Square (Leninsky Prospekt metro station) past a hunting lodge remaining from Prince Trubetskoy’s estate.

Overgrown ponds and 200-year-old pines are a testament to the great history of this Moscow park, which centers around the old Pokrovskoye-Streshnevo estate, which once belonged to the Streshnev family, relations of the royal Romanov dynasty.

Numerous pathways extending out from the estate are perfect for serene cycling. Ravines and jumps in the heart of the park provide a zone for extreme riding.

Pokrovskoye-Streshnevo is located in northwest Moscow just a short distance from Voykovskaya and Shchukinskaya subway stations.

The Krylatskoye neighborhood, one of the most environmentally clean areas in Moscow, lies to the west (Krylatskoye metro station). The Krylatskiye Hills Park has been officially recognized as a nature sanctuary and spreads out over an area of 200 hectares. Its unique terrain featuring tall hills and an abundance of winding slopes and ravines attract lovers of hazardous freecycling. Those who prefer safe cycling use a 13-km riding track built for the 1980 Olympic Games.

The most notable historic landmarks in Krylatskoye are the Church of the Nativity of the Blessed Virgin, built in the late 19th century, and a nearby spring.

A wide alleyway leads from Sokolniki metro station to the eponymous park. A dense forest was discovered here in the 14th-16th centuries, where Russian tsars and princes entertained themselves with falconry (giving the area its name – “sokol” is “falcon” in Russian). Present-day Sokolniki is notable for its numerous scenic alleys and pathways around several ponds. The northern part of the park adjoins the Elk Island reserve, where cyclists may actually encounter an elk while riding.

Forty-three percent of Muscovites are willing to use a bicycle not only as a weekend recreational vehicle, but also as a primary means of transportation, according to a survey of 1,000 people conducted by the research center of the job search site SuperJob.ru.

The total length of cycling lanes in London amounts to 900 km, while Paris has more than 400 km of cycling lanes. In Moscow, this figure totals about 18 km, and in St Petersburg it is 26 km.

More than 4,000 people participated in the fifth annual Moscow Cycling Night this year.