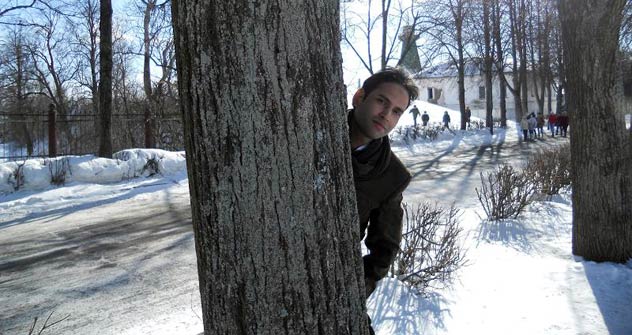 Mohammad Shahid Khan, an alumnus of New Delhi-based Jamia Millia Islamia university, recalls his 10-month trip to Moscow during which he not only learnt cadences of the Russian language, but also fell in love with a new culture and people.

Many months ago, I was sitting in a park and was pondering about my future. All of a sudden, a friend came over with a form in his hands. When I asked him what he was up to, he told me he was going to appear in the language entrance exam. It struck me that this is something I want to do and I immediately bought a form and filled it barely five minutes before the closing time of form submission. That fateful decision, taken on the spur of the moment, proved to be the turning point of my life. I was lucky that I got selected to study the Russian language. I knew Russian was not so easy, but thanks to my professor it did not seem such a daunting task.  Dr. Sumana Jha, as far as I am concerned, is the best teacher in the world. I am profoundly grateful to her for ushering me into a new language world.

In many ways, going to Russia was like a dream come true. As a child, I had often dreamed of going abroad, and I was lucky that Russia turned out to be the first country overseas I would be visiting. Getting a scholarship was a pure stroke of luck. For the last seven years, there was no scholarship offered by Russia for learning Russian. However, when I got admission in the Russian language at Jamia Millia Islamia university I heard that some scholarships are on the way. I applied for it and got it. It was indeed a kind of wish fulfillment.

The land of history, the land of warriors and the leaders, the land of beauty... It was freezing cold when my flight touched down in Moscow. I was shivering as the temperature was 2 degree Celsius. In my life I had never experienced such low temperature before. In days to come, the temperatures plummeted further, sometimes as low as -27 C, but by that time my body system had got used to the Russian weather.

The learning institute was a world in itself. I was really impressed by teachers who were experienced and knew how to teach Russian to foreigners. They encouraged students to speak fluently and made us practice the right intonation and diction. Although all faculty member and staff was good, I would specially like to mention Galina Nikolayevna and Ekaterina (kachya), who were not only brilliant teachers, but also wonderful people.

Living in the hostel was great fun. I made many friends, and got exposed to different cultures and languages. The kitchen was the hub where gossip was exchanged and lasting friendships formed.  In Moscow, I, therefore, learnt not only the Russian language but also Spanish and Italian. On weekends, we went in groups to pubs and restaurants.

Looking back, my stay in Moscow was full of memorable moments.  I distinctly remember the first snowfall. When the flakes of snow fell on my face, I felt like a child. It was 5 am in the morning and I ran out when I saw snow falling. A friend of mine also joined me with his camera, and clicked my photos.

I moved around in Moscow quite a bit and also went to neighbouring towns. I went to ‘Tula state’ in an electric train (electrichka). Suzdal was a fairy tale town of sorts. It literally breathed history: Suzdal was full of museums and rare artefacts. ‘Varavio Gori’ in Moscow was a lot of fun. I really enjoyed skating there without skating shoes or pad. I was charmed by old women (babushki) who worked really hard despite their age.

For all those going to Moscow, my advice would be to take enough woolens, mufflers, overcoat et al to beat the cold, and yes, make as many friends as possible. If you get into any trouble, feel free to contact your institute or embassy. They will be more than willing to help you out.