US Entrenchment in Uzbekistan 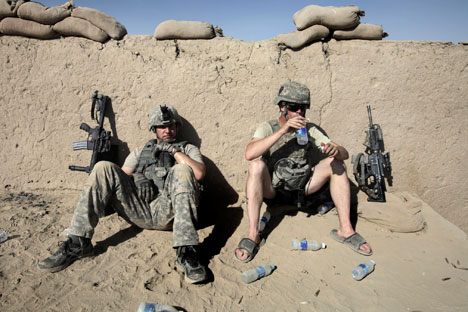 The hypothesis that the US is planning a partial relocation of its military infrastructures from Afghanistan to Central Asia appears increasingly realistic, the countries of key interest to Washington being Tajikistan, Uzbekistan, and Kyrgyzstan. Tashkent's current preferences are illustrated with utmost clarity by the contrast between the heightened intensity of its diplomatic transactions with the US and the sluggish pace of its dealings with Moscow.

US diplomats seem to be touring Uzbekistan in a continuous mode. NATO Secretary General's special representative for the Caucasus and Central Asia James Appathurai showed up in the country on May 11 to meet with the republic's parliamentarians, diplomats, and defense ministry officers. On May 12, a US Department of State team led by coordinator of the Nuclear Smuggling Outreach Initiative (NSOI) program Michael Stafford visited the Uzbek foreign ministry to discuss joint non-proliferation efforts. On May 20, Uzbek diplomats held talks with a US delegation headed by US Special Envoy to Afghanistan and Pakistan Marc Grossman. On May 30, the Uzbek foreign ministry hosted a meeting with US Deputy Assistant Secretary for Central Asia Susan Elliott. On May 31, Uzbek president I. Karimov received US Deputy National Security Advisor Denis R. McDonough. The US Chargé d'Affaires ad interim Duane Butcher came to Uzbekistan on June 3. On July 1, Laurie Bristow, Director for Eastern Europe and Central Asia at the UK’s Foreign Office, visited the Uzbek foreign ministry, where, the same day, new US ambassador to Uzbekistan George Krol handed over his credentials. George Krol paid another visit to the Uzbek foreign ministry on July 4, and on July 5 Uzbekistan welcomed a US  delegation headed by US Principal Deputy Assistant Secretary Kurt Amend. On July 7, a US diplomatic contingent with senior Republican aide on the Senate Appropriations subcommittee for foreign operations Paul Grove at the helm landed Tashkent.

In the meantime, Russian president D. Medvedev's June visit to Uzbekistan drew surprisingly scarce coverage. On June 10, the site of the Uzbek foreign ministry featured a line saying that president Medvedev would be in Uzbekistan on June 13-14 on president Karimov's invitation. The two presidents met briefly at the Tashkent airport and president Medvedev headed back for Moscow, with no information about the talks released.

Uzbekistan traditionally plays the key role in implementing a series of US infrastructural projects related to Afghanistan. A recent example was the opening of the Uzbek-built Khairaton - Mazar-i-Sharif railroad. Backed by a $165m loan from the Asian Development Bank, the route is going to be used to supply the Western coalition in Afghanistan. The current chill between the US and Pakistan and the tide of Talib activity can't but tell on the functioning of NATO's southern supply route, forcing the alliance to increasingly switch to the alternative northern one which traverses Russia and Central Asia.

US Assistant Secretary for South and Central Asian Affairs Robert Blake expressed a view at the James A. Baker III Institute for Public Policy early in 2011 that the US should take control over Central Asia, a strategic region bordering Afghanistan, China, Russia, and Iran. Uzbekistan's centrality to the region was, in fact, stressed in Z. Brzezinski's The Grand Chessboard, which makes it clear why the Central Asian republic is as of today at the focus of the US foreign policy.

The deepening US-Uzbek diplomatic engagement is paralleled by an evident decline in the relations between Tashkent and Moscow. Russia's Regnum media outlet quoted an unnamed foreign ministry source as saying that the Uzbek president asked twice during phone talks with D. Medvedev to be received in Moscow, but no reaction followed. Several major Russian companies – for example, Wimm Bill Dann, one of Europe's largest dairy products suppliers, and the Knizhny Mir bookstore chain – withdrew from Uzbekistan recently. Last June, Russia's United Aircraft Corporation announced axing its cooperation with the V.P. Chkalov Tashkent aircraft company which used to be the manufacturer of IL-76 military airlifters back in the Soviet era. At the moment, some success in the Russian-Uzbek cooperation can be credited only to the oil and gas sector which, along with cotton export, is the main cash earner for the Uzbek economy.

Russia's irreversible split with Uzbekistan – likely to be followed by those with Kyrgyzstan and Tajikistan – would leave the republics entirely under US protectorate and would cut a new divisive line across Eurasia along the southern frontier of Kazakhstan, opening a gap between the post-Soviet Central Asian republics and the Customs Union comprising Russia, Kazakhstan, and Belarus.

This article was first published on www.strategic-culture.org