India and the Far East are saving the tiger together 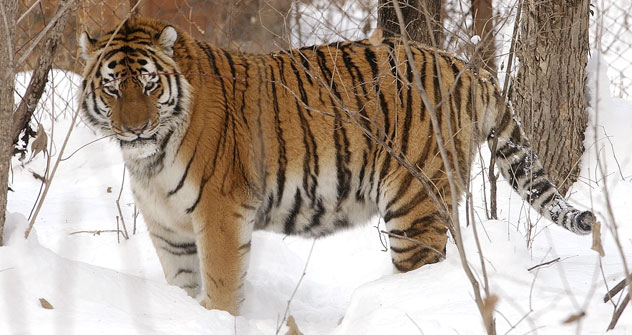 Discussions have been held in Vladivostok about conserving and augmenting the tiger population.

The main goals of the Russo-Indian campaign for tiger conservation were discussed during a recent conference in Vladivostok. The main theme of the event was the preservation and augmentation of the striped cat population. It was organised by the Federal Government Agency Specinspektsiya Tigr and the Consulate General of India in Vladivostok.

It is hardly coincidental that India is participating in this programme: there are more tigers in India than in any other country in the world, and programmes for the preservation of tiger populations have existed for decades. The protection of the predators is backed by the government. India’s legislation makes no allowances for anyone who has intentionally killed a tiger; poachers of tigers face long imprisonment or a hefty fine, and there are no mitigating circumstances for this crime.

India’s experience in this sphere could be invaluable in the struggle to preserve and augment the population of striped predators in the Far East.

The Amur Tiger, also known as the Siberian tiger, is the biggest cat species on earth, and today this tiger can only be found in Russia, in the Primorsky and Khabarovsk Regions. Over the past hundred years the number of these animals has decreased a hundred fold. The Amur tiger is protected by the state, and is listed in the “Red Book of endangered species” of the Russian Federation. The hunting and trapping of tigers is illegal. Since 1998 there has been a federal targeted programme for the preservation of the Amur tiger, approved by the Government of the Russian Federation. The Amur tiger is the jewel in the crown of the Far Eastern taiga, and the pride of the Russian people.

“The tiger living in this territory is something unique for us; as the habitat of the Amur Tiger the Far East plays an important role”, says the Consul General of India in Vladivostok, Ms. Gina Uika.

The results of the latest tiger population surveys were announced at the event in Vladivostok. The general consensus was that man is the main factor contributing towards tigers’ extinction. The main threat is poaching: the poachers, spurred on by the constant demand for tiger skins as well as other parts of these big cats that are used in Chinese medicine, have hunted the tigers throughout the last century and continue to hunt them today. Conservationists from the Primorsky region once again raised the question about whether there ought to be harsher penalties for poaching. At present poaching is only punishable by fines and the sum of these fines does not nearly equate to the damage caused.

According to page 258 of the Russian Criminal Code under the heading, “Illegal Hunting”, a guilty party, convicted of poaching on a nature reserve, can either face a fine in the region of 200 thousand roubles, four to six month’s correctional labour, or four to six months behind bars.

For continuing the conservation of the tiger population in the Far East a major concern is to increase the size and number of nature reserves, and also to establish systems for specially protected natural territories.

The Russo-Indian collaboration is going to make every effort to save the tigers and increase their population.