We found her in the metro... 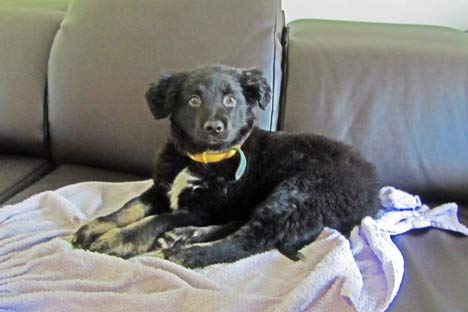 Moscow is full of stray dogs, roaming the metro and city parks. What happens when an ordinary couple takes one home?

Welcome rabies, fleas and roundworms – we adopted a puppy from Moscow metro and took it home.

It all started with a phone call that literally changed my life. My boyfriend phoned, telling me he spotted a dog couple on his way home from the metro, possibly giving birth to puppies and to come and have a look. As it turned out, the dogs were puppies themselves and he had mistaken some chicken pieces people threw them to chew on for newborn baby dogs. Poor, hungry and shaking, they were cuddling on a piece of cardboard in a corner. Some people stopped and stared, even though they are used to stray dogs around metro stations, and entire packs of wolf-like and wild dogs living in parks around the city.

One of the puppies, light colored and quite able to sell itself with its snout up in the air trying to get some attention, was lucky and taken away by a young girl. The other puppy, dark and much more dirty and fuzzy stayed back alone. Frankly speaking it took a lot of looking to see the cute dog behind this poor dirty fur thing. Meanwhile some other people joined us watching the dog, waiting desperately that somebody would also take the second puppy, which now was even more pitiful and sad without its sibling.

We started calling random people, asking whether they would like to have a dog, but you you can’t even imagine how people react when they hear you would like to bring them a dog from the metro. A guy we met, Mikhail – the greatest dog salesman ever – suggested that we pay a metro worker to take care of the dog. But we didn’t trust the worker, who looked way more interested in Mikhail’s 500 rubles than the poor dog. And finally we had no other choice – we had to take it home. Puppies have a very little chance of surviving on the street, with no proper food and the speeding cars, even though occasionally entire packs of dogs live freely and on the street, finding food in garbage containers.

We called our neighbors, who were very encouraging – our neighbor insisted we leave the dog in the metro “or I’ll shoot the dog in the morning.” But dealing with angry neighbors and being officially declared mad by colleagues and friends did not stop us in the end. A few minutes later the puppy was in our bathtub, showered and shampooed by Mikhail, us and another girl – Vika, who became the dog sitter. The old cardboard box, a pillow and a blanket became the puppy’s bed in the little corridor entryway we share with the neighbors. Luckily my boyfriend works for a local newspaper, so there was enough to cover the floor, for the dog to pee on as needed. We called the dog Sharik Polygraf Polygrafevich (based on the famous novel “Heart of a Dog”), although it was later changed to Laika, since the dog was actually a girl.

Now how does a dog fit in our lifestyle – which involves countless hours of overtime, networking and other job-related events? Well, not at all. Since none of our friends were willing to take the dog in, we shared the responsibilities with some absolutely great people. Mikhail, the guy we met in the metro, advertised Laika’s profile on several websites; Vika stopped by during the weekdays to feed and walk the dog; our neighbors (absolutely the best neighbors!) helped us walking the dog, feeding her and keeping their patience with the strong dog smell in the entrance area and the occasional little toilet accidents of Laika. My friend Kat (herself a dog owner) gave helpful tips.

To find the right family for Laika, the good old Internet eventually made it happen. Advertising Laika on: www.avito.ru/ (direct link) we found, after a few unsuitable candidates, the perfect dog parents-to-be. After 3 weeks, with tears in our eyes, we handed Laika over to the new dog parents, happy that this story ended that way and not with Laika, as so many other homeless dogs in Moscow, on the street. There is still a lot to be done in caring for animals in Russia, but basis for it already exists – people with a soft spot in their hearts for animals.

(Thank you to all our supporters and helpers!)