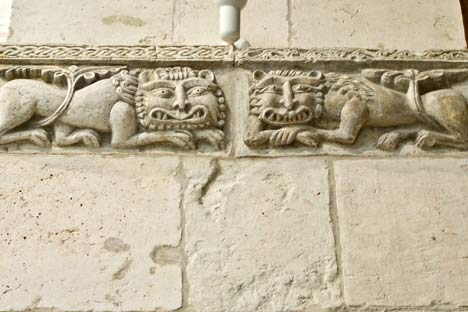 In the 13th century, the rulers of Rus showed their power and devotion through the construction of cathedrals such as the Church of St. Dmitry in Vladimir.

In the history of Russia there are certain buildings, rich in complexity, that stand out as symbols of Russian culture. St. Basil's on Red Square in Moscow is one example; the Winter Palace in St. Petersburg is another. From the early medieval period, one of the best examples is the 12th-century Cathedral of St. Dmitry (St. Demetrius of Thessalonika) in the city of Vladimir. For over 900 years, its carved white stone facades have served as remarkable testimony to the inspiration of anonymous medieval artisans.

The fortress of Vladimir was established in 1108 on the Klyazma River a few miles south of Suzdal. Its founder, Vladimir Monomakh, ruled as grand prince in Kiev from 1113 to 1125, and his reign is considered one of the most productive in the complex history of Kievan Rus, as the lands of the eastern Slavs were known at that time. With Monomakh’s guidance, the area around Vladimir rapidly became a new center of political and economic power in the northeastern part of Rus. Under the rule of his descendants in the second half of the 12th century, Vladimir and its surrounding settlements witnessed an extraordinary surge in the construction of churches of white stone (a form of limestone).

One of the most dynamic builders in Vladimir was Vsevolod Yurevich, grandson of Monomakh and half-brother of Andrei Bogolyubsky, the founder of Bogolyubovo and ruler of Vladimir from 1157 to 1174. In 1162, Andrei drove Vsevolod's mother, Elena, and her sons into exile in Constantinople. After the death of Andrei, Vsevolod took power as grand prince in Vladimir (from 1174 to 1212) and thus ensured the continuation of the Monomakh princely line in the eastern lands of Rus.

Vsevolod well understood the uses of architecture in projecting authority.  Medieval Russian princes actively supported the construction of large churches not only as an expression of religious devotion and support for the Orthodox Church, but also as a statement of the power and wealth that they commanded. The carvings on the facades of the St. Dmitry Cathedral are a direct expression of that power, beginning with a depiction of the Biblical King David on the upper part of the west façade—the main entrance. Other rulers depicted include Alexander the Great and a central figure tentatively identified as King Solomon (on the south façade).

In addition to these iconic depictions of divinely anointed rulers, the carvings include representations of Christ, as well as an array of saints and figures from the Old Testament. Many of the carved blocks depict ornamental figures or heraldic motifs such as lions. Of special interest is the arcade frieze along the middle of the structure. The spaces between the carved, attached columns serve as niches for statues of saints.

The order of the carved blocks on the facades has been largely preserved despite renovations over a period of eight centuries.  Like the Church of the Intercession on the Nerl, the lower part of the St. Dmitry Cathedral was originally buttressed by an exterior gallery that led to the upper level. The removal of this dilapidated structure in the 1830s enhanced the perception of the exterior carving, even as it rearranged some of the carved blocks.

The interior also contains carved elements such as crouching lions, but for the most part the surface is devoid of whatever decoration it once had. An exception is the miraculously preserved group of frescoes in the west part of the interior, just beneath the choir gallery. Painted shortly after the cathedral’s completion, these Byzantine inspired frescoes include a gathering of saints at the Last Judgment and a depiction of Paradise, with figures of Abraham, Isaac and Jacob.

What were the origins for this rich artistic expression on both exterior and interior? Possible sources have been the subject of much discussion among historians. Romanesque architecture and sculpture from central Europe is a logical source, although the details of this transfer are unknown. And some have argued for the influence of carved church facades in the medieval Caucasian kingdoms of Georgia and Armenia. The reign of Vsevolod also brought a renewal of the creative spirit of Byzantine art in Vladimir. During the years he spent in Constantinople, Vsevolod had direct access to the glories of Byzantine culture (including illuminated manuscripts), and this is perhaps the primary source for the art of the Cathedral of St. Dmitry.

Less than a half century after the completion of this remarkable cathedral, the city of Vladimir was overwhelmed by one of the cataclysmic events of Russian history, the Mongol invasion. In late February 1238, the city was captured and sacked with great loss of life. The grand prince at that time, Vsevolod’s son Yury, was killed a few days later in a final battle with the Mongol armies.

The city of Vladimir never fully recovered from this devastation, and by the 14th century it was already subordinate to the rising power of Moscow. Despite the turbulence of the region’s history, the enduring art of the Cathedral of St. Dmitry offers a message in stone from a golden age of medieval Russia.