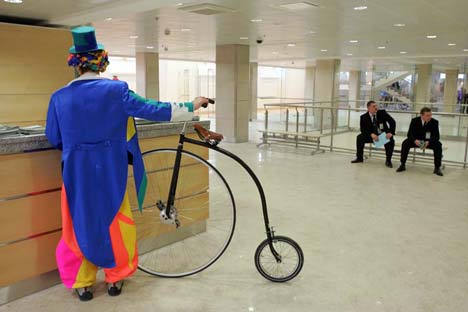 When I get down, I turn to the Moscow Circus. The funny thing is, I don’t even have to be in Russia to find this zany lot of highwire walkers, acrobats, hand to hand balancers, and trapeze fliers. I can just go to Las Vegas Boulevard where they appear everywhere from the stages of the Cirque du Soleil shows to the classic Jubillee at Bally’s where Russian performer entertain audiences with their aerial acts as dancers change costumes behind the scenes.

They’re not just in the big shows. Over at Planet Hollywood, at the V Theater, I can go watch Gregory Popovich, who is my favorite. Gregory, his wife Izolda are classically trained, bona-fide Moscow Circus performers, who have spent a lifetime entertaining crowds in red rings before bringing their acclaimed trained pet and comedy show to Sin City along with – get this – a trained goose. When I watch them, for real, I get the giggles.

It’s not surprising given I live in a city where there are literally ten circus shows on one street. No other city in the world can boast of having so many circuses. There’s a lot of Russians performing in them, so it’s like having our own Little Moscow right smack in the middle of The Strip, something few are aware of, not counting the Russians, of course. They are plenty aware of everything.

They don’t just bring their highly trained bodies or their enthusiasm for performing to the New World. They bring with them centuries of tradition that if you think about it, has a lot to teach us. They bring with us stories about life in the Old World, where bigger wasn’t always better.

In Russian circus in particular and classical, red ring and ringmaster tradition in general, performers try to ‘out trick’ each other, clamoring to show off their most difficult dare devil trick, the whole point of circus and what in part, differentiates it from any other performing art. Professional trapeze artists, for example, try the most complex moves in the air, some aiming to achieve the quintuple, or five rotations in mid-air right into the arms of the catcher waiting at the other side of the net. They fly at speeds of up to 60 miles an hour. It’s a dangerous trick, but that’s the point: audience are supposed to hold their breath and wonder if they’re going to make it. So far, just in case you were wondering, no one in the world has. Few have the skill to even think about mastering it. But there’s a lesson here: take risk, dare to try new things.

In a Russian circus tradition, if they blow a trick, they have to do it again. It’s a whole tradition. In trapeze, the artist acknowledges their mistake, and climbs up the ladder and tries again. If it’s a juggler who drops a pin, they pick it up, and they, too, do it again. The Russian artists laugh, explaining that sometimes they even make mistakes on purpose just to tease the audience and remind them that what they do is very complex and take years of practice though they make it look so easy. The lesson here is obvious: try, try again. If you fail at first, keep going until you succeed. I am so lost in their wowness factor that I forget any trouble I think I have at the moment.

On Las Vegas Boulevard, in all the big shows with shows and showrooms costing hundreds of millions of dollars, mistakes are missing. Instead, the emphasis is on bigger being better. There are more performers on stage doing different tricks all at once. Everything is very high tech and busy. Mistakes are rare because tricks, as some say, are easy.

The directors don’t want trapeze fliers missing tricks, and landing plop, on the net, climbing up, and doing it over, while the music has gone on and the audience realizing that it is a very dangerous way of making a living and not as poetic as it’s supposed to be.

In other words, much of the tricks have been watered down, and the sense of danger and uncertainty, the heart and soul of classical circus, has disappeared with the magic acts that you also won’t see in any of the ten shows. Is that a good thing? Well, it depends who you ask. Those making profits argue that the circus has been reinvented and money reflects public’s interest. Others claim that a circus with no animals is no circus at all, it’s theater with circus elements and in no way should be counted as circus.

It’s an ongoing argument, but I can tell you this: in the big shows, I get lost amidst the all the acts going on at once, because it seems that bigger is supposed to be better on The Strip, and it’s hard sometimes to comment on anything, because at the end of the show, it’s like I’ve seen it, but I haven’t.

This idea that bigger shows means better ones doesn’t leave me thinking the traditional circus has been re-invented. It leaves me feeling that it’s become a disappearing act, bamboozled and run over with a truck. Or maybe that is the point: we’re not supposed to focus on any one thing, leaving us with a feeling as we walk out that we’ve missed part of the show (perhaps because we have), and we’ll have to see it again to get the complete experience. And spend more money.

Whether it’s the case that modern art is forcing classical art to change, such as in the case of ballet, and people to reconsider just what is circus anyways, I think the point is that there’s a lot we can learn from history. The stories of the Russian performers, which I collect, are astounding. They are eager to describe their lifetime on the road, wowing and wooing audiences worldwide with their zaniness. The tricks they dream up, I swear, keep me on my toes. And it’s the tricks and the people who perform them, not the costumes.

To be able to see Vegas through their eyes is extraordinary. They have more than stories to tell; they have lessons to teach us, namely that there is a place for simplicity and laughter in our everyday lives.