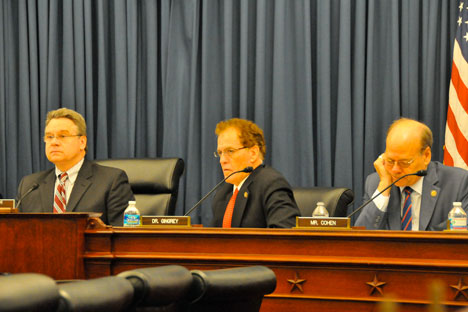 The U.S. State Department has confirmed reports in “The Washington Post”about sanctions against a number of Russian officials on the “Magnitsky list.” A State Department spokesman told RIA Novostithat, under the immigration and citizenship act, the State Department was obliged to withhold from issuing visas to people involved in human rights violations such as torture and extra-judicial murder.

The State Department imposed sanctions without waiting for Congressional hearings on the bill, which would ban people on “the Magnitsky list” from entering the United States and freeze their accounts in American banks. The document, entitled “Sergei Magnitsky Rule of Law Accountability Act of 2011” was introduced to legislators in May by Sen. Benjamin Cardin (Democrat-Maryland) and Sen. John McCain (Republican-Arizona). The bill would broaden the list of criminals by including other “flagrant human rights violations” in Russia. The bill mentions the murders of Anna Politkovskaya and Natalya Estemirova, the prosecution of Mikhail Khodorkovsky and Platon Lebedev and the beatings of Mikhail Beketov and Oleg Kashin.

The fact that the State Department has penalized Russian officials without waiting for the lawmakers’ decision is seen in Moscow as “Obama’s attempt to cozy up to Congress” and as “a blow to the reset” of U.S.-Russian relations.

All signs, however, are that this isn’t the case at all. As it turns out, “The Washington Post” learned about the State Department sanctions from a rider the Obama Administration attached to the Cardin-McCain bill. The White House sent the five-page document to its more ardent supporters.

The preamble to the note says that the Administration shared the concern of congressmen over the tragic death of Sergei Magnitsky. It goes on to list the moves the Administration has taken over this issue: public criticism and calls on the Russian authorities to investigate the incident and punish the culprits; meetings with Russian officials, the lawyer’s relatives and former colleagues. It stresses that Secretary of State Hillary Clinton has already taken steps to ban trips to the United States by people involved in the wrongful death of Sergei Magnitsky. And then comes the main phrase: “The Administration sees no need to adopt this additional bill.”

The document goes on to list six reasons why Congress should not even consider the bill. For starters, the White House does not quite understand what criteria were used to create the punitive list and does not want the United States to react similarly in the future to human rights violations abroad. The Obama Administration believes that sanctions against individuals whose guilt has not been proven are not entirely legal. The document goes on to say that the bill would overburden U.S. financial authorities because they would have to look for the assets of the Russian citizens targeted by the sanctions.

The White House thinks that the bill is somewhat ambiguous as to whether the sanctions are to be applied only to those on the “Magnitsky list” or to all those who willfully violate human rights. The note also says that the Cardin-McCain bill does not allow those subjected to sanctions to appeal, which is illegal.

Most importantly, the document says that the Russian Government has warned the White House that if Congress passed the bill, Washington would have to forget about Moscow’s support of American policies towards Iran, North Korea and Libya. The agreement with Russia on the transit of American military cargo to Afghanistan will also be under threat.

It follows from the note that in imposing sanctions against Russia, the Obama Administration hoped to prevent a falling out with Russia. Moscow, however, has dismissed Washington’s noble impulses. Natalya Timakova, the Russian president’s press secretary, said that Dmitry Medvedev had given an order to prepare retaliatory measures against American citizens. “We find the U.S. State Department’s decision puzzling. It has, without waiting for the results of investigative actions and the verdict of the Russian court, taken actions that it is not supposed to perform. Such measures were not taken even in the most difficult years of the Cold War,” said Timakova.

The Russian Foreign Ministry promptly fulfilled the president’s instructions. It published some tough comments on the State Department’s move on its official website yesterday. It reads in part: “The Russian side will not leave unanswered such unfriendly acts and will take adequate measures to protect the sovereignty of our country and the rights of Russian citizens against unlawful actions of foreign states.”

Meanwhile, sources told “The New York Times”that the feeling in the U.S. Senate is that it is too soon yet to bury the Cardin-McCain bill. The newspaper’s source said that some senators believe that the State Department’s measures are not tough enough.