'Viswanathan Anand has many fans in the Russian capital' - Boris Gelfand 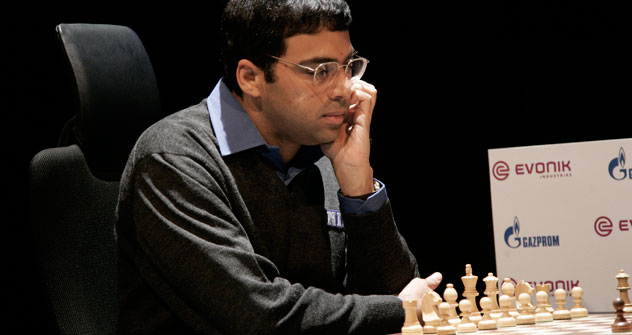 Moscow and Chennai bid for the right to host the World chess championship title match.

Several more contenders may come forward, says Kirsan Ilyumzhanov, President of the International Chess Federation (FIDE). Minsk, the home town of the Israeli grandmaster Boris Gelfand, as well as London, may enter the race. The deadline for entering bids runs out on 31 July, and the winner will be announced the following day.

Under the terms of the tender, the organisers of the match must guarantee a minimum purse of one million euros and transfer a further 200,000 in dues to FIDE.

Moscow was the first to file its bid back in June. “A serious sponsor has indicated an interest in the match between Anand and Gelfand being held in Moscow,” said Ilya Levitov, head of the Russian Chess Federation. Initially, the benefactor’s name was kept secret, but then we are not looking at the secret debut plans of the time of matches between Anatoly Karpov and Garry Kasparov.

It transpired that the man who is ready to provide $2 million for the world chess title match is Andrei Filatov, co-owner of the N-Trans Group of companies. Having a Candidate Master title himself, he has recently been acting as a chess patron. He paid for the restoration of a monument to Alexander Alekhine in Paris.

The challenger, Boris Gelfand, liked the idea of playing the match in Moscow: “I wouldn’t say that I will be playing in Moscow like I was at home, but I‘ll feel very comfortable in the Russian capital. I’m sure Anand will like it there too. The world champion has many fans in the Russian capital,” Izrus.co.il quotes him as saying.

Moscow has vast experience staging world chess title matches. The first one, between Emanuel Lasker and Wilhelm Steinitz, was held at the turn of 1896 and 1897. In the middle of the 20th century practically all matches took place in the USSR. Where else were Soviet grandmasters to play? It was not until 1972 when first Bobby Fischer and then the “apostate” Viktor Korchnoi laid their claims that the tradition had to be changed.

The last world championship match Moscow hosted was the open-ended one between Anatoly Karpov and Garry Kasparov in 1985. The match was stopped by then FIDE President Florencio Campomanes after 48 games failed to determine the winner. Under the rules they played until one or the other won six games, and the score was 5:3 in Karpov’s favour.

The last match between Viswanathan Anand and Veselin Topalov was played in the latter’s home town Sofia. Bulgarians say it was a lucrative event, but one finds it hard to believe this because chess has lost its erstwhile popularity of late.

Let us face it, there are no giants like Botvinnik, Tal, Fischer, Karpov, Kasparov (with all due respect to Gelfand and Anand). The Norwegian Magnus Karlsen, the most commercially attractive chess player, pointedly ignored the knock-out stage. As soon as he announced his decision London refused to bid for hosting the final match.

Ilyumzhinov’s announcement that London is again interested in the chess championship and has found some sponsors looks like a bluff that makes one think of the fictional grandmaster Ostap Bender, for whom the FIDE President has a soft spot. Minsk as a venue is a joke. The challenger’s hometown, where from he emigrated to Israel, barely has enough money to disperse protest demonstrations.

FIDE Presidential Aide Berik Balgimbayev has been stressing ever since the tender was announced that FIDE was expecting bids from Israel and India. Both countries obliged.

Chennai, Anand’s home city, has entered its bid. The government of Tamil Nadu state is ready to allocate 200 million rupees (about $4.5 million) to organise the match. “We are sure to get it,” the Indian newspaper Hindu quotes FIDE Vice President D.V. Sundar.

News of the Indian bid coincided with reports of a terrorist attack in another major Indian city, Mumbai. A high terrorist alert was announced in India’s three biggest cities, including Chennai. On the one hand, it boosts Moscow’s chances to host the match, but on the other hand, prize money today matters more than security considerations. In the summer of 1998 the world Russian checkers championship took place at the Severny airport in the Chechen capital Grozny, not the safest place in terms of terrorist threats. The reason was that Shamil Basayev had ordered $45,000 to be paid in prize money. This was after Budyonnovsk and Basayev were already declared the most wanted terrorists, but it was also stressed that he was almost a professional checkers player and was advocating making checkers part of the school curriculum in Chechnya.

We should keep our fingers crossed that Tripoli does not bid to host the Anand-Gelfand match. Chennai can surely handle the match. So can Moscow. It looks as if for Russia today the number of prestigious sporting events it hosts is more important than supplying sick children with medicaments or housing veterans.