Boat in Russia continue to sink 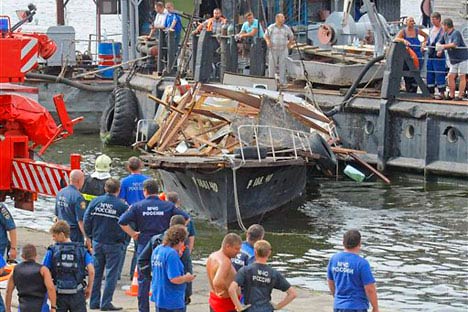 An overloaded motorboat, apparently carrying a group of partyers, rammed into a moored barge near Moscow’s Luzhniki Stadium early July 31, sinking on the spot and killing nine people. The Moscow River accident is the second of its kind in less than a month after the Bulgaria riverboat sank in the Volga River, killing 122.

An investigation was ongoing the same day, but investigators said they were inclined to blame the motorboat’s owner, with a reputation for giving rides to celebrities and ignoring navigation rules. He died in the accident. The boat, identified in some news reports as the Swallow, collided with the Oka-5 barge around 1 a.m. It was carrying 16 people despite a maximum capacity of 12, Interfax said, citing an Emergency Situations Ministry spokesman.

Other boats in the vicinity and sailors from the barge managed to pull six people out of the water, including at least two Turkish nationals, the report said. One more survivor swam to the shore by himself. Investigative Committee spokesman Vladimir Markin told reporters that one survivor said he works at the U.S. Embassy. The survivor’s citizenship was unknown.

Traffic was blocked on the Moscow River until rescuers managed to raise the motorboat — lying 3 meters directly under the barge — to the surface and plant it on dry land. Pictures of the boat showed that it was heavily damaged, with twisted metal rails along its decks and a mass of crumbled wooden beams where the main cabin once stood.

The boat was registered in the far eastern region of Chukotka but authorized for operation on the Moscow River, Interfax said.

Markin said the boat’s owner, Gennady Zinger, who captained the vessel, was likely to blame for the accident. He did not elaborate on what exactly prompted the collision. Zinger, 50, had been fined three times this year for operating an overloaded boat, Markin added. Zinger used the vessel for parties, not commercial rides. Zinger's circle of friends included veteran rocker Andrei Makarevich and film star Ivan Okhlobystin, who often took river rides with him, although not this time. Neither has commented publicly on the accident.

Zinger was likely partying with friends, his business partner said. He conceded that the 13.7-meter boat was often overloaded, but said Zinger was always attentive when steering and knew the part of the river near Luzhniki well. "I wouldn't describe him as a rash person. He was a sensible man," the businessman said about Zinger's steering abilities.

Emergency officials identified several of the victims in early reports, but did not specify their occupation or nationality. Markin said only that most of them were in their late 20s, RIA-Novosti reported. Itar-Tass said the motorboat was booked for a party by a glossy magazine, while other reports said a Turkish national was celebrating his birthday. This information went unconfirmed later.

The accident took place in a "dangerous" place and likely resulted from the boat's pilot not taking note of the barge until it was too late to maneuver, Sergei Moiseyev, head of the Russian Yacht Association, told Channel One television. "First off, there's a turn there that's already dangerous because you can't see any hazards from afar off," Moiseyev said. "Second, it's a pretty narrow spot, with a sandbank pushing the navigation channel toward the shore. And third, there are bridge lights — they didn't let the speeding boat see the ship's lights."

The previous major riverboat accident occurred on July 10, when the Bulgaria, which carried 201 people, was flooded and within three minutes sank in the Volga during a storm in Tatarstan. The ship, which was built 55 years ago, had been poorly maintained in recent years and regularly overloaded with passengers, including on its last trip, investigators said. Two people — the head of the company that leased the Bulgaria for the cruise and a regional official who certified the vessel as seaworthy — have been arrested and face up to 10 years in prison on negligence charges. After the sinking, President Dmitry Medvedev ordered a check of all passenger ships in the country.

Moscow City Hall said that it might toughen the rules for all vessels sailing in the central section of the Moscow River after the latest accident, Ekho Moskvy radio reported. More ship incidents were reported nationwide this weekend. In Karelia, a small fishing ship sank Friday for unspecified reasons, killing two of four crew members aboard, Interfax said. A local law enforcement source said all the sailors were drunk.

In Khimki, just north of Moscow, a 13-year-old girl was killed by a speedboat while taking a swim in the Moscow Canal on Friday, Lifenews.ru said, citing local police. No other sources confirmed the story, which echoed a similar incident in the Moscow region last year when a 25-year-old woman was killed by the propellers of a passing boat whose captain fled before the trial.

In the far eastern city of Komsomolsk-on-Amur, an inquiry was opened after crew members operated the Om-1 cruise ship while heavily drunk Friday, local prosecutors said, adding that the sailors were so inebriated it took them three attempts to successfully moor the ship in the port after their voyage.

The story first appeared in The Moscow Times