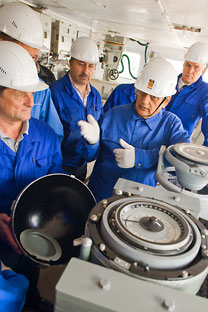 Given the legacy of defence cooperation and ongoing projects, Russia will remain for the foreseeable future India’s major defence partner.

One of the most important features of Indo-Russian bilateral ties, which form the core of the strategic partnership between the two countries, is co-operation in the field of defence. India’s defence budget for the current year is Rs. 1.5 trillion ($32.5 billion), a 40 per cent increase over the 2009-2010 budget. It imports more than 70 per cent of its arms. The vast majority of those imports, 82 per cent, come from Russia, which has long been India’s preferred supplier. The recently concluded visit to Russia by Indian Navy Chief Admiral Nirmal Verma is in continuation of the series of many such high-level visits of top defence personnel and leaders from both countries to foster this relationship in the face of emerging challenges.

Admiral Nirmal Verma visited the Russian Federation from 11 July to 18 July 2011, at the invitation of Admiral Vladimir Sergeivich Vysotskiy, Commander-in-Chief of the Russian Navy. Admiral Verma’s was a return visit to that of the C-in-C of the Russian Navy to India in January 2011. It was aimed at further enhancing bilateral defence cooperation. The Chief of the Indian Navy visited Moscow, St. Petersburg, Vladivostok, Kaliningrad and Severodvinsk, and interacted with a large number of senior Russian dignitaries including H.E. A. Antonov, Deputy Defence Minister, as well as with his counterpart, Admiral Vysotskiy. Admiral Verma also visited various design bureaus and shipyards engaged in the construction of ships for the Indian Navy. Issues related to defence cooperation and ongoing projects were discussed in these meetings. The Admiral was very warmly received and had extremely fruitful interactions during the course of his visit.

In a press release, the Indian Navy stated that Admiral Verma “reviewed the progress of the Talwar Class follow-on warships, under construction at the Yantar shipyard … and was reassured that the first ship 'Teg' would commence trials shortly and be delivered in six to eight months.” The new frigates in this class, namely 'Teg', 'Teer' and 'Trikand' are follow-ons of the three Talwar Class warships built for India by Russia and inducted into service in the early part of the last decade. In the new ships, the Russian-origin Klub missiles would be replaced by the indigenous BRAHMOS supersonic cruise missile system.

During his visit to the Sevmash Shipyard where the aircraft carrier, Admiral Gorshkov, is being retrofitted, Admiral Verma observed that "significant progress had been made on the Gorshkov project and the ship was shaping up well for the preliminary sea trials." The Navy’s press release noted in this regard that Admiral Verma “made a first hand assessment of all projects and held vital discussions with officials at the highest leadership levels of the Russian armed forces and defence industry. Reviewing ongoing projects, the Admiral observed that they were progressing satisfactorily and had reached critical stages of maturity. He also expressed satisfaction with the quality of construction and repairs.” Further, speaking to the Russian media, Admiral Verma said that the Russian Mig 29KUB fighter jet designed for India’s aircraft carrier Admiral Gorshkov was sound and the recent accident involving the aircraft in which both the pilots were killed would not affect India’s arms orders with Russia.

The two sides also discussed increasing cooperation in anti-piracy operations. During discussions on operational exchanges between the two navies, the two sides agreed that the INDRA series of exercises form an important aspect of the bilateral relationship and therefore they must be continued and extended in scope and participation. It is significant to note here that on the visit, the Russian Navy Chief had confirmed that the Akula-II class nuclear submarine K-152 Nerpa, to be rechristened INS Chakra, will be handed over to the Indian Navy by November-December 2011.

The Navy Chief’s visit assumed significance, since it came in the backdrop of the Russian Navy backing out of a joint exercise (INDRA) with the Indian Navy at the last minute. It has been speculated that this was done to express displeasure at India ruling out the MiG-35 in the race for the multi-billion dollar medium multi-role combat aircraft (MMRCA) contract. Here it is pertinent to point out that Russia must understand India’s defence acquisition policy, which is guided by professional and not political considerations. This was firmly stated by Defence Minister A.K. Antony while addressing an International Seminar on Defence Acquisition organized by the Institute for Defence Studies and Analyses, New Delhi. On this occasion, Mr. Antony said that India’s defence purchases are not propelled by political considerations and assured the vendors that they will get a level playing field. He also said that up to the trial stage, technical soundness of a product will determine whether it will remain in the race, after which the issue of price will determine the ultimate selection. Thus, it is unfair to attribute political motives for the exclusion of the Russian MiG-35 from the MMRCA deal, especially since India greatly values the defence partnership with Russia. Both countries moreover place a high premium on this partnership, which they have developed through a sustained and committed effort over several decades. During the visit of President Dmitri Medvedev to India in December 2010, it was decided to elevate the relationship to the level of a “Special and Privileged Strategic Partnership”.

While it is true that the India-Russia relationship has witnessed significant changes since the end of the Cold War, the one area in which ties have been nearly unbroken is defence cooperation. And this, in spite of the difficulties that India had faced in obtaining spare parts and equipment in the aftermath of the erstwhile USSR’s collapse. The defence deals with Russia (see Table) are built on the strong edifice of the Indian military’s familiarity with Russian equipment, the availability of cutting-edge technology, price competitiveness, and above all the regularity of supply. This is what mainly led to India financing the production of weapons in Russia at a time when the Russian arms industry had suffered in the wake of the collapse of the Soviet Union.

However, there are issues that continue to affect this relationship. There have been repeated delays in Russia implementing major weapon orders, including for the aircraft carrier, Admiral Gorshkov. Russia has also tended to raise costs mid-way through the execution of agreed upon commitments. Roadblocks have also emerged for the transfer of technology and the uninterrupted supply of defence spares. In addition, joint exercises that have been agreed upon have also been delayed or postponed for various reasons including India’s attempts at diversifying its sources of defence acquisition. These issues are indeed being addressed during the course of regular visits by officials of both countries, including during Admiral Verma’s recent visit. India’s Defence Minister A.K. Antony will also raise some of these issues with his Russian counterpart when he visits Moscow in October 2011 for the eleventh meeting of the India-Russia Inter-Governmental Commission on military technical cooperation (IRIGC-MTC) – the main institutional mechanism for defence cooperation.

Given the legacy of defence cooperation and ongoing projects, Russia will remain for the foreseeable future India’s major defence partner. However, in view of the increased competition for the Indian defence market and the technological demands of India’s defence sector, joint development and production of new weapon systems is likely to become a crucial factor in sustaining Indo-Russian co-operation in the coming years.

Originally published by Institute for Defence Studies and Analysesatwww.idsa.in