A bumpy road to London town 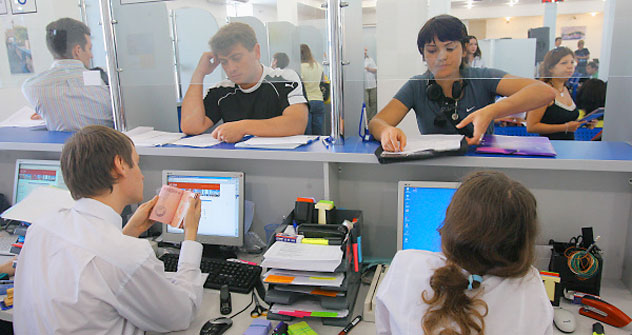 More than 200 Russians were unable to take trips to Britain that they had booked and paid for this summer because of delays in issuing visas. These delays are discouraging others from planning trips to the UK at all.

Yekaterina Lomova of Moscow was looking forward to spending a week last month touring London, shopping on Kensington High Street, strolling through the Tate Modern, and walking along the Thames River at dusk. She didn’t think twice about red tape; Lomova filed her visa application about a month ahead of the trip, as advised.

Yet Lomova found herself in the same predicament as many other Russian tourists in recent months. She hadn't received her visa even by the time she should have returned from the trip. The travel agency would not refund her the 65,000 rubles (roughly $2,355) for the hotel and flight, stating that it was not responsible for visa delays. Quickly changing plans and going to a destination that didn’t require a visa was not an option either, since her passport was still at the British visa centre.

Read Ksenia Larina's blog about bureaucracy while getting visas

Russian Internet forums are burning up with complaints about travel plans that have been ruined because of huge delays from Britain in issuing visas. One student wrote that he failed to make it to a study course, while others said they missed conferences and business meetings. Even some Russian football fans with tickets for the Champions’ League finals in May never made it to their coveted seats.

It seems these days that purchasing a package tour to London is more like a lottery than a sure bet.

In recent years Britain has been one of the most popular destinations for Russians to visit, and early summer is the busiest time of the year. The number of Russian tourists going there has been growing: in 2010, tourism to Britain rose by 24 percent to 120,000 people, according to the Russia Federal Agency for Tourism. Russian tourists spend about 310 million pounds sterling in Britain each year.

Getting there, however, is becoming problematic for Russians because of the length of time it can take to get a visa. According to the Russian Tour Operators Association (ATOR), demand for trips to Britain in June fell by 20 to 30 percent because of the problems with obtaining visas.

The British Consulate claims that it processes 90 percent of the visas within 15 days of receiving a completed application; but the consulate recommends tourists allow a month as delays can occur in busy times. Many applicants found the process did indeed take longer than 15 days.

According to the Russian Tour Operators Association (ATOR), more than 200 Russians who bought tours to Britain from travel agencies this year shared a similar fate. The delays began in April and peaked in June. ATOR Executive Director Maya Lomidze explained that the problem is not refusals to issue visas; the consulate simply keeps the passports for too long.

Keeping up with the surge?

The British Consulate attributes the visa delays to the surge in demand for trips to Britain in the summer months. But Valery Korovkin, chief of Rostourism’s International Cooperation Department accuses the British Consulate of failing to react to the surge adequately. ‘There are not many visa refusals,’ he says. ‘The consular services simply do not cope because they are staffed to handle an average tourist flow without taking into account seasonal fluctuations.’ However, Andy McFarlin, Head of the UK Border Agency in Russia, said that the British Consulate in Russia did prolong the working day by two hours to cope with the extra demand in visa applications.

Svetlana Kostusik, who runs the visa department for the BSI travel company, points out that the Consulate ‘has always reserved the right to consider any documents for longer than the official period’. Indeed, advice on the official UK visa application website www.ukvac-ru does state that 'Visa applications are assessed individually and processing times may vary.' But in early June, the British Consulate suddenly announced that the time for processing a visa would increase to 30 days, and advised applicants to apply for a visa a full three months in advance of travel – which was not helpful for those planning trips in the summer months.

Tourists, furious about the delays, have posted angry messages on the Internet forums. One wrote: ‘France too receives a lot of tourists, but they manage somehow.’ According to Ms Lomidze of ATOR: ‘France, unlike Britain, warned Russia in advance about possible visa delays, so we have had time to take pre-emptive measures.’

The delays have left many Russians disillusioned. Many cancelled their trips. Some took suggestions from travel agencies to take holidays in other countries. ‘The current situation undermines people’s trust in travel companies and Britain as a destination,’ says Ms Lomidze of ATOR.

Is politics at play?

Foreign Office Minister for Europe David Lidington added fuel to the fire in early July when he told a press briefing in Moscow that the discussion of simplifying the visa regime with Russia could not begin until Andrey Lugovoy was brought before a British court. Lugovoy, a former KGB bodyguard, is now a Duma deputy; Sotland Yard suspects that he poisoned KGB agent turned Kremlin critic Alexander Litvinenko in London in 2006.

BBC Russia says that Lidington was speaking about a special visa plan for officials and was not implying that the visa situation for ordinary Russians was linked with the Lugovoy situation — a point confirmed by the Russian Foreign Minister Sergey Lavrov on Vesti-24 news channel. He said that Britain had assured Russia that ‘the United Kingdom does not set the Lugovoy case as a precondition for easing the visa regulations.’

ATOR has asked for help from the Association of British Travel Agents (ABTA) and Rostourism, but ‘no official changes have yet taken place,’ according to Ms Lomidze of ATOR.

‘The visa problem must be solved at the level of the two foreign ministries, which must reach a consensus,’ says Mr Korovkin from Rostourism.

Commenting on the visa delays, Russian Foreign Minister Sergei Lavrov told Vesti-24: ‘We have offered the British a plan to ease the visa regulations which have been in force in the EU for several years. But at this stage our partners are not ready for that. They speak about making the most of the current rules, but current rules are creating a host of problems.’

The points-based visa system, introduced in 2008 to help manage migration to the United Kingdom, is penalising artists coming into the UK to perform, say a group of prominent artists in Britain. In June, 100 famous musicians, artists, writers and dignitaries signed an open letter in which complained about the process. In it, they claimed that the system is ‘needlessly bureaucratic and intrusive’ and that it discriminates against artists who have no European Union passports. In recent years artists from all over the world have failed to show up at events because of the difficulties in getting visas. Acclaimed Russian concert pianist Grigory Sokolov was cited as one who had been 'dissuaded from future visits' despite having regularly performed at concerts in Britain over the past 18 years. The visa points system is claimed to have affected the work of 70 percent of arts organisations in London. The signatories of the letter, including the Author Salman Rushdie, Director Sir Nicholas Hitner, Tate Gallery Director Nicholas Serota called on the authorities to allow artists to enter the country, by-passing the new system on the grounds that 'granting short-term visas to visiting artists has no impact on immigration'. The UK Border Agency indicated that no changes were in the offing, saying that anyone who wishes to visit Britain must 'meet the entry requirements'.

Ksenia Larina blogs about bureaucracy while getting visas:

Soviet bureaucrats in the British consulate

Folkstone is a small town on the shores of the English Channel with an English-language school where my son was to spend two weeks with a group of Moscow school kids as a reward for good academic performance. The kids are happy and the parents pleased. Their children will be housed with local families for whom this is not just their main business, but an honor. The summer school has special programs for classes and leisure, sightseeing and even soccer games. The timetable is calculated precisely, to the hour, from arrival to departure.

The documents for the visa were filed a month before, on June 6. Russian children have to be brought to the British embassy and stand in the line like adults. Their irises are photographed (if they have contact lenses, they have to take them out), their fingerprints are taken and they are interviewed. The documents are filed for the whole group, since the children all have one teacher escorting them. Attached to the applications are copies of plane tickets and confirmation from the Folkstone school that the places have been reserved, the program has been drawn up and the families are ready to receive them.

From that point on, the nightmare begins. The documents have been passed to somebody; the documents are waiting to be seen by somebody; then passed to somebody else and so on.   It is impossible to get any information; telephone answers from the information center take ages. You have to stand in the line just to be told that your documents are not ready yet. You hear nothing but the words “not ready.” In the evening before the departure day, it turns out that the documents for two boys are still not ready (after a month). They cannot fly separately from the group because there is a single ticket for the whole group.

So the flight for the whole group is cancelled.

The names of the two boys who still have not received their visas are Valiulin and Khamidov, which prompts some dark thoughts. Are the British authorities afraid of Russian terrorists with non-Russian names? Where is your much-touted political correctness?

I hope this has nothing to do with nationalism, just ordinary red tape – which is the same everywhere.

We are adults, we are used to callous bureaucrats and we take it in our stride.

But the kids, who are enchanted by England and who have dreamed about this trip and worked hard to earn that honor – do they deserve such treatment?

Ksenia Larina is an observer at the Echo Moskvy radio station.

This excerpt from Ksenia's blog was originally published at the Echo Moskvy website.