An ode to citizenship 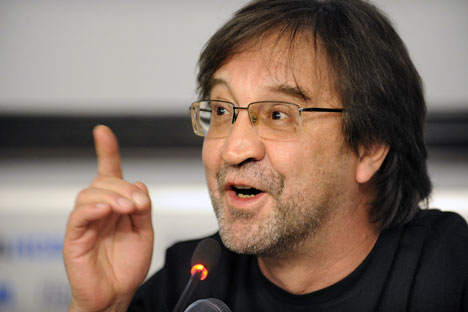 One of Russia’s most politically active musicians, Yuri Shevchuk, believes that performers have much more authority in society than they deserve.

Fifty-four year old Yuri Shevchuk, a painter by education and one of the most celebrated Russian rock musicians, poets and composers, founded the famous band DDT and became its lead singer in 1980. The band’s repertoire is often characterized as oppositionist and its musicians had multiple run-ins with the Soviet authorities for their politicized lyrics. A stringent opponent of “soulless” pop music, Shevchuk is also an outspoken critic of the current government, voicing his discontent at Strategy 31 opposition rallies, in poignant comments to the media, and even during meetings with top Russian officials. Shevchuk spoke to Russia Profile about Russian music and the role that contemporary performers play in Russian society.

In your opinion, what are the strengths and weaknesses of Russian songs?

You want a simple answer to this question? In their humaneness. Any human being can be both very strong and very weak, and Russian songs are about that. It’s a very delicate thing. They are very vivacious, very human. A real Russian song is very humane; it’s connected with the soul, with the heart, and not with the mind, as a rule.

Do ideas matter in performing arts? How can you evaluate a performer based on the ideas (or lack thereof) behind the art he or she is representing?

Of course, ideas are indisputably important. I have a poem: “You crawl out on Broadway, and there is the thought in your head, ‘idea!’” This is a play on the words “idea” and “i gde ya” (where am I?) The idea is where I am. I like to play with words. When someone doesn’t have ideas, they don’t know where they are.

What is the place that performers occupy in the Russian society? Are they undervalued or over-praised?

I think it’s incommensurate; the performer gets too much praise and attracts way too much attention in the Russian society, on the radio, on television. Just too much. Previously, performers weren’t even buried in church cemeteries; they were buried beyond the fence, where they belonged. And today, both in Russia and in the West, in the United States, in Hollywood, where there is a very good looking but dumb performer, the whole word is talking about him. What good did he do? He played some idiot, and that’s it? You have to realize, this is simply terrifying. Or a performer went on stage, sang something, something stupid, and the whole world applauds him? I believe that in the world, in the United States, in Europe, in Russia, everywhere, way too much attention is being paid to performers. I protest!

Why are performers seen as authoritative figures on some moral or even socio-political issues? Is this how it should be?

This is just because performers are the talk of the town. If nuclear physicists were being shown on television every day, then they would be authoritative figures. You see, this doesn’t matter at all. The problem is that many performers say silly things. So it would be better if nuclear physicists were authoritative figures. Scientists, workers, it would be more interesting. A performer is also a citizen; everyone has their own point of view. Everyone should take a stand with regard to their civil views. There is a performer, Alexei Devotchenko, he is an exceptional person, and I really respect him. He is a wonderful actor at a St. Petersburg theater, and he takes a civil stand for freedom. And then there are dubious performers, more like service personnel, waiters. “What would you like?” And so on. I don’t like them. Primarily, a person has to have a personality, individuality. It doesn’t matter who you are, a performer or a driver; I am interested in people’s personalities. What are you? Where are you? How are you? That’s what matters.

You said that Russian songs come from the heart, and not from the mind. But then you can’t have a performer with no ideology. How do you reconcile these two?

There is a paradox here, that there can be no performer without an idea, but a Russian song doesn’t necessarily have to have an idea. But can love be ideological? We don’t know what we love for when we love. And a Russian song is love. And a performer, sure, he can have an ideology, it’s more interesting that way because he is an individual.