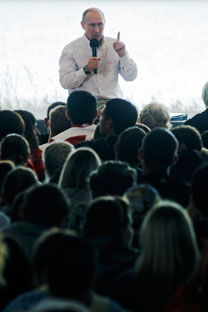 Putin’s plans to join South Ossetia with Russia get a mixed reaction.

Russian Prime Minister Vladimir Putin made it clear that unification of South Ossetia and Russia is possible. Nezavisimaya Gazeta’s (NG) sources are pointing to the possible negative consequences of this decision. Some of NG’s sources have suggested that, consequently, Russia is not only declaring its imperialist ambitions, but is also trying to tighten its control in the region, which calls for significant fiscal injections. One of the sources argues that the prime minister’s statements concerning foreign policy indicate he is exceeding the limits of his authority, because Russia’s foreign policy is the prerogative of the president.

The head of the government, while answering a question regarding the possibility of uniting South Ossetia and Russia, said that the future of the republics depends on the people of Ossetia: “At different times in history, the marking of the border between North and South Ossetia varied,” he said. “There was a time when there was no border. The border appeared within the framework of a single state, within the framework of the Russian Empire. It was simply more manageable that way. But the realities that have recently transpired, the realities which we are aware of… You know that Russia, which in the well-known events, when the current Georgian leadership engaged in the well-known military actions (instigative, criminal), supported South Ossetia. The future will depend on the people of Ossetia.”

The president of South Ossetia, Eduard Kokoity, commented on Putin’s statement yesterday. He said that his “people have historically looked to Russia and will never forget Moscow’s momentous decision to recognize the independence of South Ossetia in August 2008.” However, he quickly added; “I believe that South Ossetia could become a part of the Union State of Russia and Belarus after Belarus recognizes our independence.”

The same position was heard in an Ekho Moskvy interview of South Ossetia’s ambassador to Russia, Dmitry Medoyev: “Today, we could be talking about integration processes, about South Ossetia’s entry into the Union State of Russia-Belarus,” he said. Medoyev confirmed that the republic’s leadership has no plans of including South Ossetia in the composition of Russia. Almost the entire population of the region, says the diplomat, has Russian citizenship. However, forthright entry into Russia’s territorial composition could significantly complicate the fate of the republic, believes the diplomat. He noted the recent decision of US lawmakers, who accused Russia of occupying a part of Georgia. “And today, saying that we want to become a part of the Russian Federation would confirm the accusations which are being addressed from overseas,” Medoyev said. “We cannot allow for this to happen. We are grateful to the Russian Federation for the decisions that were made in August of 2008… But for us, freedom is of utmost importance.”

South Ossetia’s deputy speaker of parliament, Yury Dzitstsoity, even more decisively expressed doubt regarding the republic’s accession to Russia: “By becoming a part of Russia, there are many things we are losing – the army, the parliament, the Supreme Court, and the president,” Dzitstsoity said. “All of this will be located in Vladikavkaz. We will become a district, and lose jobs. After all, everyone understands that within a single state (Russia), there cannot be two republics of Ossetia.”

A source in the Georgian government told NG that the Russian prime minister’s statement is being examined to see in what context and in what circumstances it was made. Georgia’s reaction to the ongoing events will depend on these findings: “Generally speaking, Putin’s statement proves the correctness of Georgia and its partners, who believe that, having occupied Georgian territories, Russia will try to annex them,” said NG’s source, who underlined that at this time, this is his personal view only.

Ramaz Sakvarelidze, a political scientist and former advisor to Georgian presidents Eduard Shevardnadze and Mikhail Saakashvili, pointed in an interview with NG to the domestic political nature of the prime minister’s statement: “An election campaign is starting in Russia, and Putin has the presidential elections ahead of him,” Sakvarelidze said. “The attractive formula for the annexation of the territory was aimed at the Russian constituents. A territory detached from Georgia, which by the efforts of Russian propaganda has nearly become the main enemy of the RF. It seems that Putin’s statement is an element of the election campaign, and not another way of stinging Georgia.”

Sakvarelidze believes that no real action will be taken to incorporate South Ossetia into Russia: “Putin has already faced a lot of criticism from some of the leading powers after recognizing the sovereignty of the former Georgian autonomies, and given this negative background, Russia will hardly be interested in expanding its territory through South Ossetia,” he predicted.

How serious are Russia’s intentions? According to NG’s sources, in the late 1980s, Georgian surveyors received one last order from Moscow: to compile a detailed map of South Ossetia, indicating all facilities, including outhouses in the countryside. The request was met within the deadline. Perhaps it was then that plans to annex this region to the RF surfaced, noted NG’s source in Georgia, who took part in the geodetic survey.

Putin’s statements raise another question: While inquiring about the opinion of the people of Ossetia, why didn’t Vladimir Putin show interest in the viewpoint of his own people? Chapter 1, Article 3, Section 3 of the Russian Constitution states: “The supreme direct expression of power of the people includes referendum and free elections.” Clearly, demarcation of the state borders is an issue that calls for “direct expression of power” of the citizens.

“Whether or not unification should take place,” said the head of the Institute of Globalization Studies, Mikhail Delyagin, “will be a question addressed to 20 or 30 million Russians, living on the territory of the republic. Meanwhile, no one will ask for the opinion of 140 million Russians who will be the ones paying for this.”

Recall that this past spring, the republican leadership’s inquiry into the management of Russian public funds allocated for the reconstruction of South Ossetia found that it had cost 41 million rubles. And in December 2008, the Audit Chamber of Russia determined that of the 550 million rubles allocated for the reconstruction of the republic, only 50 million had been used. According to Aleksey Malashenko, a member of the Scientific Council of the Carnegie Center in Moscow, the tightening of control over the monetary flows to the republic could be one of the reasons for our leadership’s desire to include the region in Russia’s composition. “We are supporting this region,” he said. “Costs may even be reduced, because if we make South Ossetia a constituent territory of the federation, then we could have greater control over it.”

Experts have generally been skeptical of Putin’s statements regarding South Ossetia. “Foreign policy issues are within the mandate of the president of the Russian Federation,” said the chairman of the Institute of Modern Development, Igor Yurgens. “Therefore, it would be nice for the prime minister, who deals with issues concerning the economy, to do just that. ”Yurgens finds the given conflict to be similar to the case with Libya, “when the prime minister exceeded his mandate.”

Others have warned about the difficulties inherent in Putin’s proposal. “Unification is a tricky thing,” Malashenko said. “When we are simply recognizing their independence, that’s one thing. If the West is unhappy with this, we can always point to Kosovo, because, legally speaking, there is no difference between Kosovo, Abkhazia and South Ossetia. But if we are to add South Ossetia to our territory, then that could indeed be qualified as occupation. That is a much worse case, because it signifies an open confrontation with the West.”

Is Putin considering this factor?

“Why should he be afraid of the West?”, Malashenko rhetorically asked. “The West cannot handle Gaddafi. What could it possibly do with Vladimir Putin?”

“Another attempt to show to the West that we ‘know a thing or two’ seems somewhat strange,” said the head of the analytical center at the Institute of Political and Military Analysis, Aleksandr Khramchikhin. “This is a very dangerous precedent. Everyone will have the full right to say: Guys, we need American tanks, so that what happened to Ossetia does not happen to us… In terms of the ‘reset,’ and Russia’s positions in the West in general, this will simply be too much, and to no one’s liking.”

“More than half of the population supports the idea of separating the Caucasus, and here we are being told we need to attach another territory, and pay for it?” Khramchikhin told NG. “The decision will be highly unpopular. Besides, the North Caucasus will quickly realize that the ‘extra’ money will bypass them.”