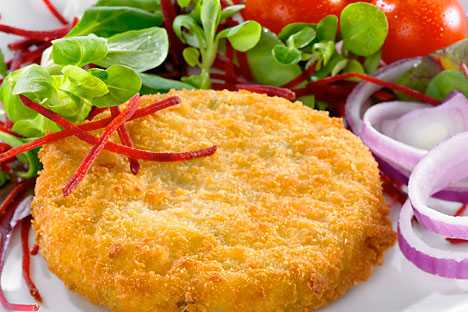 One of the most rarified compliments we bestow upon our fellow human beings – and certainly one of the more lasting – is to name a dish after them. In Russia, as the rest of the world, dishes tend to be named after the rich and/or famous: Count Stroganoff’s beef, Count Orlov’s veal, and Prima Ballerina Anna Pavlova’s soaring meringue and fruit confection. With all this in mind, when I started to research Russia’s favorite game croquettes, Pozharsky Croquettes - a dish that has survived war, revolution, and perestroika to remain a favorite with generations of Russians – I assumed they must be named in honor of Prince Dmitry Pozharsky of Suzdal, one of the heroes of the successful 17th Century patriotic uprising against the Polish-Lithuanian invasion which resulted in the election of Tsar Michael Romanov in 1613. Serves me right for not knowing my Pushkin better! In a ringing 18th Century endorsement, Russia’s most beloved poet wrote this enduring piece of culinary and travel advice to a chum:

“Take a break for lunch

And enjoy your day.”

Pozharsky’s was a successful tavern run by an ambitious man of the same name in bustling and prosperous Torzhok, a wealthy merchant town, known for its embroidery and exquisite churches, which lies strategically along “The Imperial Way” between Moscow and St. Petersburg. Legend has it that Tsar Nicholas I stopped unannounced at Pozharsky’s to sample his famous veal cutlets. It had been a busy day for the innkeeper, and he was sold out of cutlets, and his larder stripped of all veal. Pozharsky, some say on the advice of his more levelheaded wife, hastily assembled substitute croquettes from the scraps of game and poultry he had handy. When the Tsar summoned Pozharsky to congratulate him on the meal, the innkeeper hung his head in shame, and confessed what had happened, fearing the worst of the imperial displeasure. The Tsar, no doubt in an expansive mood after an excelled meal, awarded him a medal and put Pozharsky Cutlets on to the Imperial menu. Pozharsky, ever the astute businessman, took to advertising himself as “Supplier to the Imperial Court.”

More than a century and a half later, Pozharsky Croquettes remain a fixture of many a festive Russian occasion, and are made from a combination of poultry and veal. Efforts to source game rather than chicken will pay off handsomely: turkey, partridge, grouse or rabbit add interesting layers of flavor, and are the perfect foil to the traditional accompaniment of sautéed mushrooms and finger potatoes. Sadly, Pozharsky’s exact recipe has been lost, as has his inn, but Elena Molokhovets, Russia’s 18th Century culinary writer, is firm on the use of several tablespoons of Madeira wine, while other experts suggest substituting Madeira, vodka, gin, or dry white wine.

1 ½-loaves of crusty French bread left to stale one or two days, with the crust removed, sliced into 2-centimeter cubes

30-ml of Madeira or Marsala wine

Place the stale bread cubes in a shallow dish. Cover completely with the heavy cream. Set aside for 15 minutes, and then sieve the bread, reserving the cream.

Separate two of the eggs, reserving the white of one.

Combine the poultry, veal, soaked bread cubes, onion or scallions, two egg yolks, salt, pepper, dill, Madeira or Marsala wine, and 50 grams of the butter in a food processor. Pulse four or five times to combine, then turn out into a large mixing bowl.

Whip the egg white into stiff peaks and fold into the meat mixture.

Cover the mixture and refrigerate for 1 - 2 hours.

While the mixture is chilling, melt the remaining butter over low heat. When completely melted, skim the surface of cloudy white film. As the melted butter separates, decant the top yellow liquid into a separate jug, and discard the creamy white remains. Set the yellow, clarified butter aside.

Prepare for assembly of the croquettes: set a bowl of cold water next to a baking sheet or cutting board. Place the breadcrumbs in a shallow dish, and beat the remaining eggs and the 50-ml of the cream together in deeper dish.

Dip your clean hands into the cold water and form the mixture into oval shaped croquettes 10-12 centimeters long.

Dip the croquettes into the beaten egg/cream mixture, and then roll them lightly in the breadcrumbs to coat each croquette.

Heat approximately 1/3 of the clarified butter in a large skillet and add 20-ml of the oil. Fry the croquettes in batches until crisp and golden brown for 12-15 minutes Gently remove the croquettes to a dish in a warm oven. Wipe the skillet clean, add more butter and repeat until all the croquettes are done. Serve immediately.

Serve with sautéed mushrooms or finger potatoes and a garnish of fresh parsley and dill.