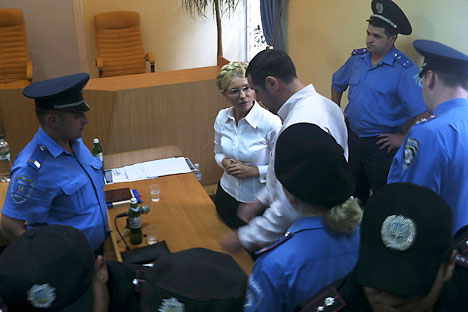 Ukrainian police officers surrounding Yulia Tymoshenko to detain her in the courtroom during a hearing Friday. Source: Alexander Prokopenko / Reuters

Ukrainian Orange Revolution icon Yulia Tymoshenko has long been loathed by Moscow, but now that she is behind bars, the Russian government has joined the chorus of her supporters.

The turnaround is not as strange as it may seem, given that Tymoshenko was placed in detention during a trial related to the Russian-Ukrainian gas deal she signed while prime minister in 2009.

Ukrainian President Viktor Yanukovych has lately hinted that he want to revise the deal, and Moscow's backing of his sworn rival Tymoshenko indicates Russia's mounting disappointment in his policies — even though he was the Kremlin's bet during the Orange Revolution in 2004.

Kiev's Pechyorsky District Court on Friday ordered Tymoshenko placed in pretrial detention for "contempt of court." Tymoshenko repeatedly lashed out at prosecutors and judges during the process, ongoing since April, accusing them of running a sham trial on orders from Yanukovych.

The Russian Foreign Ministry, while not criticizing the move explicitly, indicated its disapproval of the arrest and dismissed the charges against the former prime minister.

"All 'gas' agreements of 2009 were in strict accordance with the legislation of both countries and international law, and authorized by the presidents of Russia and Ukraine," the ministry said in a statement on its web site.
It also urged for a "fair and unbiased trial" for Tymoshenko that must follow "basic humanitarian norms and regulations."

The Kremlin issued no public statement on the matter, but an unidentified source in President Dmitry Medvedev's administration told Kommersant that Tymoshenko's detention will have "long-lasting consequences" for Yanukovych.
"The arrest will have international repercussions and is unlikely to yield positive results for Yanukovych," the source was cited as saying Saturday.

Indeed, Tymoshenko's detention was also criticized by the U.S. government, the foreign ministries of Britain and Canada and the head of the European Parliament, all of whom voiced concerns that her arrest might be politically motivated.
Tymoshenko, who heads the eponymous opposition bloc in Ukraine's parliament, the Verkhovna Rada, faces up to 10 years in prison on charges of abuse of office. Prosecutors say she authorized the 2009 deal without the mandatory Cabinet approval.

The 10-year deal, which increased the price Ukraine pays for Russian gas from $230 to $450 per 1,000 cubic meters starting in 2010, had followed a so-called "gas war" during which Russia cut off gas supplies to the country for several days in January 2009.

Prosecutors claim that Tymoshenko was blackmailed by Russia into accepting the deal, which they say threatened to use an old fraud case against her. Tymoshenko's opponents claim that the Unified Energy Systems of Ukraine company, which she headed in the mid-1990s, swindled $323 million from the Russian Defense Ministry, which contracted it in a construction materials-for-gas deal. The case against her in Russia was closed in 2005.

Incumbent Ukrainian Prime Minister Mykola Azarov said during an earlier hearing that Tymoshenko "betrayed" Ukrainian interests by approving the gas deal, which was signed by Prime Minister Vladimir Putin on the Russian side. Putin did not comment on the trial.

Tymoshenko had said earlier that the contract allowed the removal of the long-standing middleman in Russian-Ukrainian gas deals, Swiss-based RusUkrEnergo, which she said was a corrupt scheme to allow Yanukovych's supporters to drain money from the state budget.

Yanukovych has repeatedly stressed that he is not involved in the trial, but many observers, domestic and abroad, see the case as a ham-fisted attempt to remove his main rival in the upcoming presidential elections of 2012.

Former Russian Prime Minister Boris Nemtsov, who served as an adviser to Yanykovych's predecessor Viktor Yushchenko, said he does not see "anything criminal" in the gas deal.

"Putin didn't bribe her or threaten her," Nemtsov told Radio Liberty on Friday. "It's just not acceptable in international relations."

Nemtsov, who was once in Tymoshenko's shoes, having supervised the Russian oil and gas industry in the late 1990s, said Tymoshenko hoped that the deal — which preserved the gas discount for Ukraine for 2009 — would help her win the presidential elections of 2010. She lost the vote to Yanukovych.

He also agreed that the real motives behind her arrest were political.

"The most popular opposition politician … was put behind bars not because she was a corrupt crook, but because she might become a real competitor in the elections," Nemtsov said.

Independent political analyst Stanislav Belkovsky said that by supporting Tymoshenko, the Kremlin was showing its dissatisfaction with Yanukovych.

"No one speaks about it publicly, but the attitude toward Yanukovych is getting worse," Belkovsky said.

Moscow backed Yanukovych during the 2004 elections, which led to the Orange Revolution that ultimately installed Yushchenko in power, with Tymoshenko as his prime minister. Since becoming president in 2010, Yanukovych has signed a deal extending Russia's lease on the naval base in Sevastopol, but otherwise has leaned more toward cooperation with the West. Ukraine has also refused to join the tripartite customs union of Russia, Kazakhstan and Belarus.

Political analyst Sergei Markov, a State Duma deputy with United Russia, said Russia was not backing Tymoshenko, but rather trying to salvage the gas deal she signed.

"Russia is not interested in destroying the basic foundations" of economic relations with Ukraine, Markov said by telephone Sunday.

"We didn't have any disappointment in Yanukovych because we didn't have illusions about him," he added. "We knew that he would act in Ukraine's interests."

Yanukovych said earlier that he wants to revise the 2009 gas deal. Prime Minister Azarov said in the courtroom last week that Ukrainian national operator Naftogaz will suffer a $1.37 billion deficit because of the deal.

Another United Russia lawmaker, Konstantin Zatulin, said the case was likely ordered "from on high" and may therefore be an indirect attack on Russia by Yanukovych's government.

"There are many questions to Tymoshenko, and I don't see why the case [against her] should involve an international deal," he said by telephone Sunday. "But Moscow understands that all decisions in Ukraine are made at the top."

It remained unclear over the weekend for how long Tymoshenko will remain under arrest. Interestingly enough, she is being kept in the same pretrial detention facility in which she spent more than a year in 2000-01, when she was also held on charges related to gas deals between Russia and Ukraine. The case was closed soon after she became prime minister in 2005.

Originally published at the Moscow Times.