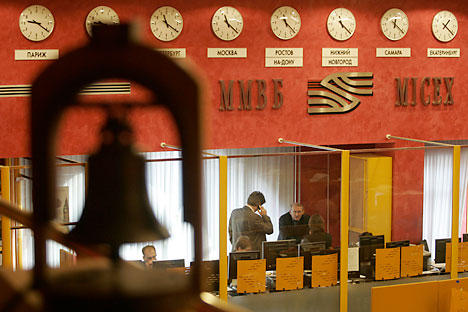 Russia's RTS and MICEX indices were down Monday as the world continues to react to Standard & Poor's downgrade of U.S. debt.

Russia's stock markets followed Asia into the red on Monday morning in reaction to the U.S. downgrade by Standard & Poor's on Friday.

The value of the bi-currency basket, comprising $0.55 and 0.45 euros, increased by 38 kopecks to 34.06 rubles at 1 p.m. Moscow time compared to the closing of the previous trading session.

"As far as Russia and Russia’s financial markets for the balance of 2011 are concerned, the key link remains the oil price," VTB Capital investment bank said in a research note.

"Both the ruble and the RTS Index have already overreacted relative to the oil price moves compared with their behavior in 2011 so far ... Obviously, as the events of the weekend amplify the dislocations induced by the fallout of last week ... the near term dynamics might be quite wobbly."

“It would have been better if [the exchanges] hadn’t opened at all.” These were the words of Oleg Bogdanov, economic commentator for Kommersant FM radio on Friday. Just half an hour after trading began, RTS and MICEX had each sunk more than 3 percent. The decline continued on Monday.

The sole cause for the drop in the indexes was the turmoil in the markets in the U.S. and Japan. The Nikkei, NASDAQ and Dow Jones indices declined 4 percent on average due to investors’ fear of a new global recession and an increase in the U.S. government debt.

According to an estimate by Russian investment firm Troika Dialog, on Aug. 4, the U.S. stock market experienced its most significant decline since October 2009. “Of the 500 companies included in the S&P 500, share prices rose for only three of them. Earnings on U.S. corporate bonds sank to a record low. Oil prices declined by almost 6 percent,” Troika noted in a report.

While the problems in the U.S. were the trigger, they were not the only reason for panic on the stock markets. Central banks in Japan and the EU have announced additional measures to support the financial sector; regulators in the largest countries are proceeding with foreign exchange intervention. Any trader knows that once authorities are expecting problems, it’s best to sell existing assets, and indeed experts are not forecasting an improvement in the economic situation.

“The medium-term outlook remains negative. For now, macroeconomic statistics are not offering clearer signals as to whether the U.S. economy is in recession or if the economic slowdown is temporary,” said analysts at investment company Vector Securities.