Will the Reset last? 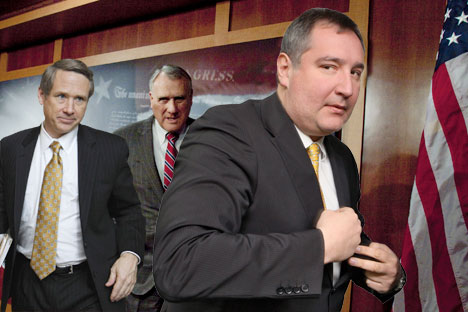 Missile defense, the Magnitsky list and charges the Russian security services tried to blow up the U.S. Embassy in Tbilisi - can U.S.-Russian relations survive?

The reset in U.S.-Russia relations is going through a difficult time. A signature foreign policy achievement for both U.S. President Barack Obama and Russian President Dmitry Medvedev, it has succeeded to a large extent because of the personal rapport between the two leaders. However, from the very beginning, the reset has been hampered by a deep mutual mistrust – rooted in the days of the Cold War – among political elites in both countries. Equally troubling, the anemic state of U.S.-Russia economic cooperation deprives the reset of a much-needed anchor in the respective business communities. Consequently, the reset remains dangerously vulnerable to every negative turn in the bilateral relationship, be it a fundamental policy disagreement or a short-term setback.

The issue with the most potential for derailing the reset is the future of European missile defense. Since the Lisbon summit last fall, when Russia and NATO agreed to look for a common ground, Moscow has been actively promoting President Medvedev’s idea of a joint Russia-NATO anti-missile system with full interoperability between Russian and NATO components. To much of the Kremlin’s disappointment, this idea was rejected –at the Jun. 9 Russia-NATO Council meeting in Brussels in favor of an arrangement calling for two independent systems connected only by a flow of information exchange. To add insult to injury, the U.S. and its NATO allies have turned down Moscow’s request to provide legally binding guarantees that the European missile defense system will not be directed against Russia.

To its credit, Moscow wisely refrained from harsh rhetoric following these developments. In a show of goodwill, a Russian delegation, headed by deputy foreign minister Sergey Ryabkov and Russian Ambassador to NATO Dmitry Rogozin, visited Washington in July to discuss the feasibility of creating joint-operating centers for missile threat assessment and information exchange. The Russians met with high-ranking officials at the White House (including National Security Advisor Tom Donilon), the State Department and the Pentagon and were invited to tour the U.S. missile defense center in Colorado Springs.

Moscow’s sober and responsible approach to the ongoing talks was mismatched by unnecessary comments made by Rogozin after his meeting with two Republican senators, Jon Kyl (Arizona) and Mark Kirk (Illinois). Having called Kyl and Kirk “monsters of the Cold War” – questionable language for a diplomat under any circumstances – Rogozin warned that U.S.-Russia relations would collapse if “radical” Republicans came to power in the United States. In Rogozin’s opinion, Moscow must take a cautious approach to its cooperation with Washington on security issues so that a “sudden change” in U.S. politics would not harm Russia’s national interest.

It was not immediately clear from Rogozin’s comments which Republican politicians he considers “radical” and what exactly “coming to power” means for the American system of split government. (Incidentally, Sen. Kyl is not seeking re-election in 2012 and therefore won’t be around in a year and a half.) However, it’s easy to imagine uproar in Moscow if a U.S. official stated that the future of U.S.-Russia relations depends on the outcome of parliamentary and presidential elections in Russia.

Ironically, Rogozin’s escapade brings to mind a discussion that took place in Russian analytical circles in 2008. Many pundits suggested that the election of then-Republican candidate John McCain as U.S. president would be better for Russia because Republicans, as compared to Democrats, would pay less attention to the issue of human rights in Russia. What a difference three years makes! Now, Rogozin and his soul mates in Russia seem to believe that a Republican president will be a death knell to the whole body of U.S.-Russia relations.

Anti-Russian forces in the U.S. perfectly understand that as long as Presidents Obama and Medvedev remain in their offices, strategic disagreements over European missile defense have little chance of killing the reset; something more “acute” is needed. Enter the long-forgotten story of a Sept. 22, 2010 bomb explosion near U.S. Embassy in Tbilisi, Georgia, which suddenly made headlines in the U.S. media last week. What triggered such attention was a classified report from last year that put the blame for the explosion on Russian military intelligence. Sen. Kyl went as far as to characterize the incident as an “attempted bombing of the U.S. Embassy” and called for a halt to all joint missile defense talks.

What Sen. Kyl described in such grave terms was in fact an explosion of a tiny device that happened in a vacant lot about 200 feet outside the embassy’s wall. No one was injured and no damage to the American property occurred as a result of this brilliant “intelligence operation.” Moreover, analysts with the National Intelligence Council, the analytical arm of the Office of the Director of National Intelligence, quietly admitted that there was “no consensus” within the intelligence community on responsibility for the explosion. In plain English, that means no evidence implicating Russian secret services ever existed.

By its reliance on classified reports leaked by unidentified intelligence officials, the Tbilisi bombing case looks like a sequel to the last summer’s Russian spy ring thriller. What is lacking this time around is a media buzz caused by the intriguing personalities of the suspected Russian spies. With no real victims of the Tbilisi blast in place – and with no evidence that the femme fatale Anna Chapman was involved – the “attempted bombing of the U.S. Embassy” won’t fly with the American public.

In the meantime, the continuing back-and-forth over the so-called Magnitsky list has a potential to damage the reset in a way that the Tbilisi bombing can’t. Last week, in a shrewd attempt at persuading Congress to abandon the Sergei Magnitsky Rule of Law Accountability Act (a.k.a. the Cardin-McGovern bill), the State Department announced that it had put a number of Russian officials allegedly involved in the Magnitsky death on a U.S. visa blacklist. As reported by “The Washington Post,” the list includes fewer names than appear on the Cardin-McGovern bill and, more importantly, doesn’t call for any financial sanctions against listed individuals. Moreover, citing the confidential character of the visa application process, State Department officials didn’t disclose the names of individuals placed on the list.

Moscow’s reaction to this development was as harsh as Russophobes in Washington must have hoped it would be. The Russian Foreign Ministry issued a stern statement promising “adequate measures” in response, while President Medvedev ordered to compose an “anti-Magnitsky” list of sorts, a reciprocal list of U.S. officials whose travel in Russia will be banned. Yet, fortunately, Medvedev didn’t listen to some “advisors” who wanted to “punish” Washington by curtailing Russian cooperation with the U.S. on Afghanistan and Iran.

The Kremlin has obviously overreacted. Denying U.S. visas to Russian citizens is nothing new: the current U.S. visa blacklist includes, among others, a top Russian business tycoon and a prominent member of the Duma. There is no need for Russia to fuel the controversy by composing any special lists. Rather, should a Russian official be denied U.S. visa in the future, Moscow can always respond in kind by denying entry to Russia to the next “available” member of U.S. political establishment.

Will the reset last? It will for as long as the leaders of both countries remain realistic with regards to what the other side can or can’t deliver given the domestic constraints. It will last if the supporters of the reset protect it from hardliners by constantly reminding the public of the tangible results of the reset, however modest. The reset will last if, in the heat of election battles, politicians in both countries refrain from using the reset to score cheap points over their opponents.

There is one more thing Russia can do to help the reset succeed: begin actively lobbying its interests in the U.S.