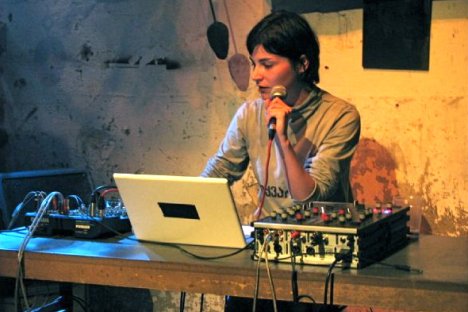 Natalie Beridze / TBA "In The White",

The music of Natalie Beridze appears as a magnetic artifact. Natalie – also known as Tusia Beridze and TBA – lives in Tbilsi, performs all over Europe and is recording with a label is based in Germany. Her songs are made up of hidden sounds, landscaping melodies through glitchy rhythms. She recently released the album Forget/fullness, considered by many one of her best works. Beridze talked with Russia Beyond the Headlines about her music and her worldview, which she summed up as “Modernity is pretty ugly everywhere”

Russia Beyond the Headlines: I discovered your music with the compilation "4 women no cry" launched in 2005. Was that album the turning point in your career?

Tusia Beridze: I wouldn't emphasize any of my albums as the ”turning point” in my career, since there was no such turning point, except one, I guess – my first-ever release. That was before "4 women no cry," in 2003, on the Cologne-based label Max.Ernst. I could characterize it as a "turning point" because with this release, my music became accessible for a broader public and it gained a chance to find its place in the world.

RBTH: For "4 women no cry" you made a cover of "Gorod", the popular song by [Russian rock group] Akvarium that appears in the film ”Assa.” Why did you choose that song?

T.B.: I guess because I love the film and the song. I didn't plan to do the cover version, I was just playing around with the mic, at Gogi Dzodzuashvili's studio and he grabbed a guitar and we sang "Gorod Zolotoj". The recording came out somehow sweet and funny and I decided to add it to the tracks.

I have few unreleased covers of famous Russian soundtracks, I might release them once, but in general I don't like to sing in Russian, nor in Georgian and I don't have a proper explanation for that. I guess I like to alienate myself from the cultural bounds and English is a perfect way to do that.

RBTH: Have you played any gigs in Russia?

T.B.: I had two gigs in Moscow in the beginning of 2000. One was in a friend's bar (I don't remember the name), and later I was invited by a Russian promoter to play in this club, called Miu or Mio.

RBTH: Is there any particularity among the Russian audience that you didn't find among others?

T.B.: I don't remember the audience at my live, but I have a Russian audience that follows my releases closely. Of course they are different then others; they are culturally closer. They have a more accurate reference of my music – we shared a childhood, we had the same cartoons, movies, literature, poetry and soundtracks. I don’t remember those communist times well, because I was too little to remember. The regime was also very different in Georgia, it was much more mellow than in Russia, but I think the surface was the same. For example, we had the same school uniforms, same backpacks, same curriculum, same morons in the TV, same favorite night-time TV program for kids.

I believe I had a perfect, splendid childhood, with lot of genius culture to feed it. I’m grateful that I was too small to remember evil of those really evil times. I took only good things with me and it all reflects in my music.  Undoubtedly I have a great deal of influence from Russian composers in my music. Classical as well as those, who composed music for feature films. So yes, in that sense, Russian audience is almost native to my music.

RBTH: Your label is in Berlin and you have gigs in any European city. Nevertheless, you are still living in Tbilisi. Is it a personal decision to stay in Georgia? What are the pros and cons of making electronic music in Tbilisi?

T.B.: There's no difference where you make music, if the question is merely about the process of making music, but the aftermath is definitely different in Georgia in terms of how and where to present the product, where to play and how to sell it. Those things are almost impossible here.

There are few labels here, but no distribution is working in Georgia. That's why young Georgian producers are desperate to get signed abroad and I totally support that eagerness because at the moment it's the only way to move on, grow and set yourself in motion. All three labels I've worked with are based in Germany, so everything that takes place after the album is ready naturally it happens outside of Georgia.

RBTH: How active is the art movement in Georgia?

T.B.: I’m afraid I have to say there's almost none. Public awareness is in the process of awakening – or falling asleep - in Georgia and it has difficulties being socially evolving and developing, so it's difficult to use this country as a platform for a downright artistic process. There are brilliant Georgian artists, but you might never hear about them unless they live and work abroad, because this country does not provide them with even minimum of what they need.

RBTH: So why do you stay in Tbilisi?

T.B.: I moved back to Tbilisi about four years ago. It was supposed to be a transitory move, which lasted longer than just a transit. It’s due to many things, but right now I feel like it makes no difference where to be. Moreover, I like being close to my family. We spend a lot of time in Berlin and maybe I will move there for a while, but I don’t consider any migration, at least not right now.

RBTH: I’ve read that you recognize mixed influences such as The Smiths, Lou Reed, David Bowie, Kraftwerk, Aphex Twin… but also Stravinsky, Prokofiev, Shostakovich and Georgian folk. Do you feel comfortable with the description as "a Caucasian Bjork"?

T.B.: Absolutely! I'm flattered with the comparison, although I myself don't think there's any resemblance except the fact that we're both female and somehow both from a small country. I might not be a fan of Bjork's singing, but she's certainly an outstanding composer and producer.

RBTH: In 2002 you entitled your album: "Georgia is like a spiritual Tokyo." Has Georgian society changed a lot since then?

T.B.: The change is evident: spiritual Tokyo is being replaced by a Dubai. Even though I have nothing against this glittering gigantic oil bunker, I still find it upsetting to have it in my country, but that’s what the majority needs in order to survive.

It’s also the vision of the modern morons in power: a future without cultural boundaries in a hideous and ugly paradise. I think generally modernity is pretty ugly everywhere. In rich countries it's little more refined, in poor countries little less.

RBTH: You studied political and media science, so how would you consider the political situation of Georgia? How do you see the pending democracy of your country?

T.B.: I can't take questions about "democracy" seriously. From communism - to democracy is like going from tyranny to tyranny with manners.