Is the West in debt to the Rest? 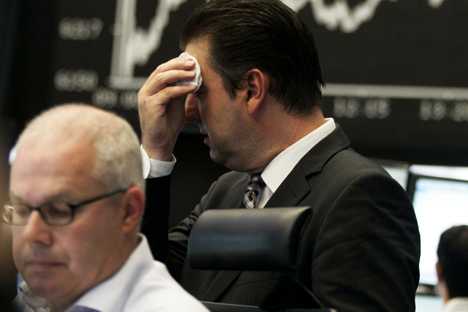 Developed economies may be in trouble, but those in emerging markets shouldn't write them off yet.

Official reactions in Moscow and Beijing to the debt debacle in Washington provide the latest example of how “The Rest” fails to understand the West – and basic politics and economics.

Russian Prime Minister Vladimir Putin said early last week during a visit to a state-run summer youth camp: “They [the Americans] are living beyond their means and shifting...their problems to the world economy… They are living like parasites... leeching on the world economy.” He added that dollar dominance was a threat to global financial markets.

Following the downgrade of America’s long-term sovereign debt rating by Standard & Poor’s from AAA to AA+ on Aug. 5, China’s state-run Xinhua News Agency claimed that America’s debt addiction was threatening the world economy, that Washington must slash its defense and social welfare spending, and that if the U.S. failed to rein in spending, there would be more “devastating” credit rating cuts to come along with global financial turbulence. China demanded international supervision over U.S. dollar issues and suggested a new global reserve currency is needed.

In a word, Russia and China believe that their positive trade balances, huge foreign exchange reserves, low debt and high growth rates make them not only economically, but also morally superior to a West that allegedly cannot solve its huge structural problems due to massively dysfunctional political systems.

And yet America’s Founding Fathers framed that country’s Constitution with a firm separation of powers precisely to avoid the very situation prevailing in China and Russia - rule and domination by any branch of government or by a single person or party.

American politicians are often rightly accused of grandstanding, and the U.S. political system is partially paralyzed by deep ideological divisions, but there and in other advanced countries, politicians are democratically elected and operate in an open political system - in contrast to both China and Russia. With no political outlet, Chinese have to express their dissatisfaction in huge numbers of strikes and increasing online opposition, as happened most recently after the train crash near Wenzhou on July 28.

But China is now trying to slow its overheated economy, so it can hardly function as a locomotive for the global one. As for Russia, the recent drop in oil prices once again highlights the country’s dangerous dependence on energy exports.

On Aug. 8, Russian stocks tumbled to eight-month lows as oil traded lower and investors cut bullish bets on commodities as doubt over growth prospects increased – thus wiping out the gains made so far in 2011. The RTS index fell by nearly 8 percent, the MICEX index by 5.5 percent, and the value of the ruble fell more than that of any other BRICS currency.

But this was entirely predictable. Russia has been increasing spending – not least because of the upcoming elections – so it now needs an oil price of $115 per barrel to balance its budget. And yet, ironically, Russia is also complaining about its low credit rating, as it needs to increase its own level of sovereign debt.

Prospects for the global economy in the short-term look bleak, and fears of a double dip recession are widespread.

This situation in the West has led many, especially in investment banking and business, to look to The Rest for growth on the back of rising living standards, urbanization and huge infrastructure needs. But in many ways the position of The Rest is much worse. Quite apart from their current problems, both the Chinese and Russian economies face massive long-term structural problems, which their governments will find hard to solve.

China’s demographic structure virtually assures that the country will get old before it gets rich, while Russia’s population, despite a recent upwards blip, looks set for long-term decline. Russia’s productivity remains low, and the country will find it hard to go from its limited tradition of superb inventions to commercialization, despite the modernization drive now underway at Skolkovo, Russia’s top-led attempt to emulate Silicon Valley.

As Russian Deputy Prime Minister Igor Shuvalov admitted on television in 2010, Russians are simply not entrepreneurial. Moreover, the country is plagued by massive corruption – including in education – and its brightest and best are leaving in droves.

Nor have The Rest come up with the policy solutions to solve the huge global imbalances in trade that are partly responsible for the current mess. Beijing keeps the yuan pegged to the dollar, thus reducing the West’s ability to stimulate its economy by exports, but argues that it is, in any event, appreciating against the dollar.

Russia, on the other hand, has no control over two of the most important elements in its economy – international energy prices, especially of oil, and its cost of capital, which remains higher than it would be if it had a more diversified economy and wasn’t largely dependent on oil. So just as in 2009, when Russia experienced the biggest decline in GDP of all the G20 countries, on Aug. 8, its stock markets also experienced significantly bigger percentage declines than exchanges in Europe and the U.S.

Russia is finding it hard to move up the value chain and escape the middle-income trap. Moreover, many in the Russian elite firmly believe that companies such as Gazprom are massively undervalued compared to their Western peers due to a Western bias against Russia. This conspiracy theory prevents them from grasping – or admitting – that the perception that Russia is governed by the rule of men, rather than by the rule of law, costs the country billions of dollars and euros in reduced market capitalization.

But the government has made no attempt whatsoever to change Russia from a low-trust society into something even approaching advanced country levels, and this will likely hamper the country’s economic development for decades.

China is having a much better go at escaping the low-income trap, but among many other problems, faces huge environmental degradation and water shortages.

So while the West might be in deep trouble, The Rest are not automatically doing well – and globalization has ensured that problems in one country or continent can quickly “go viral.”

What is now required is outstanding and concerted policy decisions in individual countries and the courage to take and implement tough decisions – and global leadership. All are lacking at the moment.