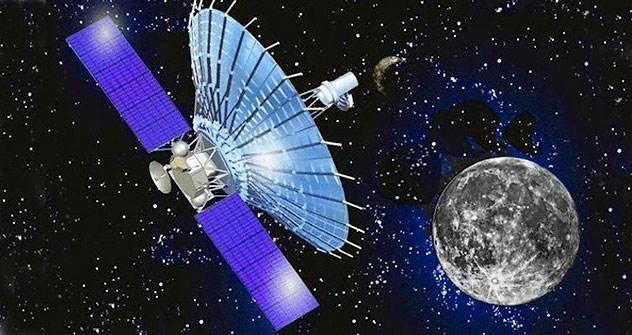 The Spektre R telescope shows the power of Russia's space program - and also has the potential to promote international cooperation.

A three-decade-long drought came to an end on July 18 when a Zenit rocket launched a Russian radio telescope into orbit. Not since the Soviet Union's economic and political fall have Russian space scientists been able to develop and launch such a cutting edge piece of research instrumentation as the Spektre R telescope.

A product of the Lebedev Physical Institute, with additional funding from the Kremlin, the Spektre R is now the largest telescope in space. It is perhaps the most beautiful as well, with a flower-like design of 27 gold-colored petals that opened up perfectly soon after launch. The main scientific goal of the five-year mission is the study of the deepest and most mysterious reaches of our universe, including the origins of black holes, the structure of galaxies, star formations and the boundaries of interstellar space.

The pride of the Russian scientific community, the telescope is only 10 meters in length, or about 30 feet. But once operational by September or October, the instrument will have a capacity to provide detailed images of the universe at 1,000 times the resolution attainable via the Hubble Space Telescope. Although as Spektre R is a radio telescope, there will be no stunning photos like the ones from Hubble – but scientists are holding their breath waiting for the first streams of data.

The telescope manages to be both small and powerful due to an ingenious system that makes use of a network of receiving dishes and telescopes on the ground. These pool together with the Spektre R to provide an extraordinary clarity of signals. Think of it as the ultimate in “cloud computing.” The network includes telescopes in Australia, Chile, China, those from the European Space Agency, India, Japan, Korea, Mexico, South Africa, Ukraine, and the United States as well as from Russia. Once operational, the telescope network will be known as RadioAstron, with a "dish" spanning 30 times the Earth's diameter.

"We've been waiting for this day for such a long time," said Nikolai Podorvanyuk, a researcher at the Moscow Institute of Astronomy. "It's been planned since the 1980s, but has repeatedly fallen through for a variety of reasons. But now it's here, and we're bracing for all the new information it's going to deliver.”

Vladimir Fotov, director of the Institute of Thermophysics in Moscow agreed. "This is going to open up a whole new era in astronomy and astrophysics," Fedotov said.  "It's a huge contribution to world science; Russia has held advanced positions traditionally. It's just great.”

The telescope's orbit is equally unusual and innovative, ranging from a low approach (perigee) of 500 km (310 miles) from the earth and then climbing to 340,000 km (211,000 miles) away from Earth. This elliptical orbit means that the moon's gravity is an important part of the mission and the telescope will hardly ever be in the earth's shadow—so it is in effect a deep space mission without the cost of being a deep space mission.

A leader in space technology has returned

But the technical aspects of the program share importance with the simple fact that the successful deployment of the radio telescope brings to an end Russia’s absence from the international community of contributions to space science. The first pictures from the far side of the moon and many other basic astronomical discoveries came from the Russian space program. So the first signals from the Spektre R will be welcomed both for what they say about the mysteries of the universe, and also for the fact that a traditional leader in space science has returned. “We are more than a space taxi,” scoffed more than one scientist, alluding to the fact that the Russian Space Agency is being paid by NASA for ferrying astronauts to and from the International Space Station.

But learning about the Spektr R would be difficult for readers of most American news outlets. At a time when NASA is caught in a budget crunch, when Congress threatens to cut funding for the James Webb telescope, the next American astronomical crown jewel, the normally boisterous, supportive space sites as well as traditional news outlets have all but ignored the Spektre R mission.

Let's hope the silence is due more to a myopic focus on saving NASA's basic science programs than disregard for Russian accomplishments. And it is made even more puzzling given that the recent launch of NASA's Jupiter mission, called Juno, was on an American workhorse rocket called Atlas 5, powered in part by rocket engines licensed from the Russian organization Energomash. The entwinement of the American and Russian exploration programs should be applauded for political, economical and scientific reasons.

But no matter, the reality is that once this stunning astronomical tour de force involving 20 nations led by a 2.5 ton space flower gets going, we all will be hoping this is only the first chapter in the second phase of Russia's exploration of the universe.

Jeffrey Manber is a long time adviser on Russian-American cooperation and author of Selling Peace, which tells his personal story of the events leading to the two nations working together in space.