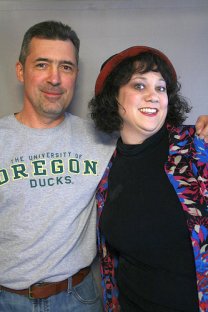 What skill could possibly transfer from being a circus performer to a new career as a deacon in the Orthodox Church? Determination.

Two major things happened on the same day; an interview with Sasha Gouzev in Reno, Nevada. A circus clown-turned-deacon in the Russian Orthodox Church, Sasha sat down with me at a Starbucks coffeehouse to tell me how his life has changed now that he's become involved in religion. It was an interesting interview that started back in a traveling audio recording trailer with the StoryCorps project, and now was in a Starbucks, then it ended up (as things do with circus people - out of the ordinary) at the side of a casino that featured a wall-sized photo of him modeling some drink. I guess he used to be a model as well. Then we ended up at the Palchikoff house, which has three unusual Russian icons that survived Hiroshima, and before that, the Russian Revolution.

Their story was told by me in the New York Times the following day. In this story about the icons, I wrote about how art is a reflection of society and a time in history. Such is life in the circus.

I asked Sasha what lessons he had learned from the circus: He said the most important one was determination. His favorite story is about how he tried out for the circus and he failed his first time doing a required trick: he had to jump on (not off) a table of a certain height.  So he spent a summer practicing this trick, up and down, up and down the kitchen table in his apartment. Three months of jumping. He finally got it. Then he became a juggler, the same way – constant determination to learn that skill. Although he's not a juggler anymore, Sasha is teaching his son the same technique to help him further his skills as a baseball player: Do it, and do it again, that's how you learn something.

His venture into the world of religion is another story I’ll tell at another time.