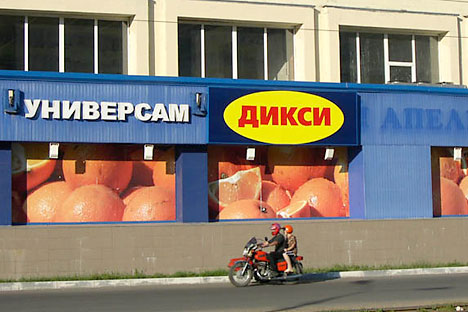 With the purchase earlier this year of a rival chain, Dixy has moved into the top five of Russian grocery retailers and is set to expand further.

Russian discount grocery retailer Dixy Group knows all about crisis: The company was born in the wake of the 1998 financial collapse and underwent a restructuring during the 2008 global economic crisis. But in spite of these challenges, the company prospered and is today one of Russia’s top five grocery retailers.  Dixy President Ilya Yakubson says that his company is now part of "the premier league" of Russian retail.

In June, Dixy acquired the Victoria Group supermarket chain for 25.6 billion rubles ($915 million). This purchase, combined with an investment drive centered around a new IT platform and logistics network, pushed Dixy into the Russian retail top five.

That's no small achievement: the barriers to building a national retailer in such a vast country with infrastructure limitations and a paucity of third-party service providers are significant. At the same time, because the market remains so fragmented, "the opportunities are huge,” said Yakubson.  “The five biggest grocers still control no more than 13 percent or so of the market."

Now that consumer confidence is returning, the big Russian food retailers are chasing the same prize – the 87 percent of the market occupied by local chains, single store retailers, markets and kiosks.

"Organic growth is the main strategy for the next three or four years," Yakubson said. "With the infrastructure now in place, we're ready for a very fast store rollout. This year we plan to open 160 stores, next year more than 250.”

Even with the planned expansion, Dixy will still be small compared to its competitors. The acquisition of Victoria Group added about 250 stores this year, bringing the company’s current total of outlets to 944.  But competitor Magnit is reportedly planning to open up to 1,000 new outlets in 2011 alone.

Dixy hopes it's rollout will help grow sales at a rate of 30 percent a year to hit $5 billion in 2012. “It's very aggressive,” said Yakubson, “but in order to build a real market-driven business, we have to be very fast and we have to know how to grow.”

Although there is some limited geographic expansion underway, the store expansion will look to deepen the retailer's presence in its current regions: the northwest around St Petersburg, Central Russia and the Urals.

This decision is a reflection of a feature specific to the Russian market – the difficulties of expanding in a country of such vast scale and low population density. "In order to have logistics you need volume, and in order to have volume you need logistics," said Yakubson. "We've started to open stores in the Murmansk region, which is 1,000 kilometers (621 miles) from our existing network, but can't build a warehouse until we have 300 stores or more. But it’s the same for everyone, and just means prices are higher in the stores."

Dixy is trying to keep prices down by cutting out Russian importers and buying directly from foreign producers and wholesalers, and Yakubson claims that the planned expansion will help Dixy protect its customers from price hikes. "It's not easy for our suppliers to raise prices," he said. "For the most part, it takes a supplier several months at least to push a rise through."

Still, the extra pennies in the purses of Russia's struggling pensioners are no longer his only priority. "We're now breaking our DNA. We were a discounter, so we thought only about prices – now we must concentrate on customer service and experience also," he said.

Dixy’s planned expansion to the end of 2012 is expected to cost up to $400 million, and that will come from cash flow, said Yakubson, pointing out that a listing in London or New York is not an immediate option. "We're quite comfortable with our debt/EBITDA ratio, but to drive this growth we won't need any outside financing. Issues such as listing on foreign exchanges or raising further debt are best discussed when we've made further investment decisions."

That means investors will need to come to Russia for exposure to a stock that analysts have rushed to upgrade since it announced the deal to buy Victoria. Alexandra Melnikova of Alfa Bank believes that alongside a secondary share offering held in mid-June to raise the cash for the acquisition, "the increase in scale and better liquidity… should help Dixy to narrow the gap and lead to increased quotes."

While foreign investors have snapped up shares of Russian retailers in recent years, international grocery store operators have found it much tougher going. France's Auchan and Germany's Metro arrived early and secured strong market share, but in the past two years both Carrefour and Walmart have given up in the face of strong domestic Russian competition.

Without a giant M&A deal, Russian food retail will likely remain a mainly domestic affair for the foreseeable future. "Quite frankly I don't care these days," said Yakubson. "Ten years ago we thought a lot about foreign players, but now the market tends to think about how to compete with the major Russian names by improving efficiency."