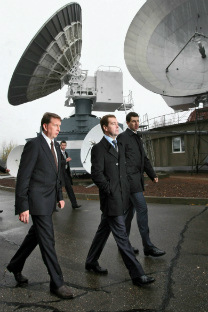 Yesterday Dmitry Medvedev signed decrees obliging a number of ministries and government agencies, including law enforcement agencies that report to the president, to publish information regarding their activities on the Internet. The announcement that the decrees have been signed was made by the president during yesterday’s meeting with the media and communications minister, Igor Shchegolev, who is in charge of monitoring the ministries’ and agencies’ transformation into open structures.

Dmitry Medvedev’s decrees approving the list of information that must be published online apply to 19 ministries and agencies subordinate to the head of state. They include the Ministry of Emergency Situations, Foreign Affairs Ministry, Interior Ministry, Defense Ministry, and Ministry of Justice, the Presidential Affairs Department, Rossotrudnichestvo, Spetsstroy, Rosoboronpostavka, Rosoboronzakaz, the Foreign Intelligence Service, the Federal Protective Service and the State Courier Service. Moreover, the decrees will apply to the Federal Services of Court Bailiffs, Execution of Penal Sentences, Drug Control, Military and Technical Cooperation, Technical and Export Control, as well as the Federal Migration Service. They have been told to publish information on the Internet in accordance with the list approved by the decree. Only classified and semi-classified information are excepted.

The decrees cite the following as information subject to mandatory disclosure: information about the organ of power, its regulatory development and ongoing activities, statistics, information about its personnel, anti-corruption measures, review of appeals by citizens and organizations, as well as income and property declaration information for officials and their family members. The state agencies must abide by the timetable for publication of information and ensure its accuracy and punctual updates.

Medvedev has been promising to make the government more accessible for a number of years. In early November, 2009, he raised this issue in his Federal Assembly address. And after his visit to Singapore, where he was shown the potential of providing state services in the electronic format (the president even opened a restaurant on the Internet within 10 minutes), he returned to this matter repeatedly.

Information which is subject to publication by the authorities is already listed in the law “On Provision of Access to Information Concerning the Activities of Government Departments and Local Self-Government,” adopted in early 2009. However, the list of information subject to mandatory disclosure must be approved by the president, the government, constituent territories of the RF, and so on. The government obliged its subordinate ministries and agencies to publish information about their activities online two years ago. Prime Minister Vladimir Putin signed a corresponding decree in November, 2009, after the presidential address.

Yesterday during the meeting with Igor Shchegolev, the president ordered the communications minister to monitor compliance with the decrees and ensure “full operation of the service”. “[I want to] make sure that people wanting to obtain information about the operations of any government office, starting with the Defense Ministry and ending with intelligence agencies, of course within the boundaries of the law, can use this service and obtain official information from the web,” he said, emphasizing that the decrees ensure citizens’ legal rights. Igor Shchegolev told the president that, within the framework of the state commission, which “works on incorporating information technologies to the operations of government bodies…an internal rating system, which citizens could use to evaluate and compare federal agencies” has already been developed. The minister promised to make these steps public “in the near future.” He said “After the decrees appear this monitoring will, of course, be even more effective.”  At the same time, the minister noted that the state agencies’ spending on website development and higher information disclosure will also be monitored and optimized.