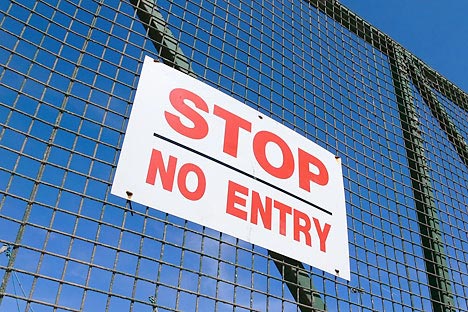 In the usual diplomatic tit-for-tat, Russia reacts to the decision by the U.S. government to issue a travel ban on Russian officials implicated in the death of Sergei Magnitsky.

On Aug. 10, the Russian government offered the first glimpse of a retaliatory blacklist compiled in response to Washington's decision to slap travel restrictions on Russian officials implicated in the 2009 prison death of Hermitage Capital Management lawyer Sergei Magnitsky.

The Foreign Ministry confirmed that it has drawn up a list of U.S. officials who might be banned, but stressed that no final decision has been made, Interfax reported. The ministry declined further comment, but Kommersant reported that the "dozens of names" on the preliminary list include U.S. agents responsible for the arrest of businessman Viktor Bout and pilot Konstantin Yaroshenko. Bout was arrested on arms-smuggling charges in Thailand in 2008 and extradited to the United States last November. Yaroshenko was arrested last summer on drug-smuggling charges in Liberia. Both are currently in U.S. prisons and awaiting trial amid angry complaints from Moscow that their rights were violated.

Bout's lawyer Viktor Burobin told Kommersant that he believed three agents from the U.S. Drug Enforcement Administration (DEA), who participated in his client's arrest were on the list. The report said another DEA agent was probably blacklisted in connection with Yaroshenko's arrest.

The blacklist tit-for-tat originated with the case of Magnitsky, whose supporters say he was tortured and killed by a group of 60 corrupt law enforcement officials in a trumped-up case. They have championed Western governments to impose sanctions against those officials, including one who arrested Magnitsky after he accused him and others in the group of stealing $230 million in government funds. The United States became the first country to do so last month when the State Department announced that it had blacklisted dozens of officials but fewer than the 60 implicated in the Magnitsky case.

The State Department has said that the measures were part of a broader program to refuse U.S. visas to individuals guilty of human rights abuses, but a leaked memo makes it clear that the decision was more an attempt by President Barack Obama's administration to stop a Senate bill that advocates targeting a much wider group of Russians with tougher sanctions.

President Dmitry Medvedev's spokeswoman Natalya Timakova has denounced the blacklist as a fallback to the Cold War, and Deputy Foreign Minister Sergei Ryabkov said this week that Washington has damaged ties with Moscow. "We see this as an attempt to draw political profit from an extremely complex issue that is totally unclear," he told Kommersant, referring to the Magnitsky case. Ryabkov stressed that no final decision has been made about the Russian blacklist. "We have drafts that contain various people from various agencies. Right now [they] are being discussed," he said.

Talk of a retaliatory blacklist has been ongoing for months in Moscow. In June, State Duma deputies announced a bill that would enable the authorities to freeze blacklisted foreigners' assets in Russian banks and ban them from conducting business in Russia. Maxim Rokhmistrov, first deputy chairman of the Liberal Democrat Party's Duma faction, said the bill was not connected to the Foreign Ministry's blacklist. "Deputies won't decide who to ban. We just want to make it easier for the executive branch to make the necessary decisions," he said.

Critics have derided these retaliatory steps as empty talk because unlike Russian officials, some of whom even send their children to U.S. schools, American officials are highly unlikely to have vested interests in Russia. But Ryabkov denied that a blacklist was an unrealistic sanction, suggesting that the Foreign Ministry would target Americans with ties to Russia.

"These are people with ties to Russian-American relations, including humanitarian issues. Any American responsible for rights violations against Russian citizens can end up on that list," he said.

But not everybody was impressed. Lilia Shevtsova, an analyst with the Carnegie Moscow Center, said the Kremlin's retaliation was pure farce because it aimed to protect officials suspected of stealing state assets. "The reaction to the Magnitsky blacklist shows that Russia is prepared to openly protect criminals and corrupt individuals, even when it runs counter to its national interests," she said.

She said the Foreign Ministry's talk of symmetric retaliation only put the country back into the role of the Soviet Union. "It shows that they are still prone to the illusion of a bipolar world."