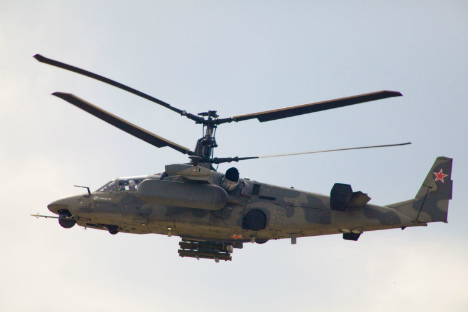 The country's premier air show, MAKS, is set to bring together a record 842 Russian and foreign companies, up from 735 companies at the last show two years ago. Attendees last time signed deals worth $10 billion, most of them contracts with the Defense Ministry.

Russian Helicopters, the state-owned defense contractor that pulled its share offer to investors in May, said Wednesday that it has landed several major contracts that it will announce at the air show outside Moscow next week.

The deliveries will start next year and run through 2014, he said, adding that the price will be disclosed at MAKS, the country's premier air show that opens Tuesday at the Zhukovsky airfield south of Moscow.

In addition, Russian Helicopters will announce deals that it is concluding with the Defense Ministry as part of the government's 20 trillion ruble ($680 billion) plan to re-equip the armed services by 2020, Petrov said, without elaborating. Petrov said he had signed part of the deals earlier this week and would sign more within days.

The Defense Ministry intends to purchase more than 1,100 helicopters by 2020 to upgrade at least 80 percent of the military's helicopter fleet, he said. Deputy Defense Minister Vladimir Popovkin said earlier this year that the effort would cost $29 billion.

The air show, which takes place every two years, will run from Aug. 16 to 21, bringing together a record 842 Russian and foreign companies, up from 735 companies at the last show two years ago. The air show will be open to the public from Aug. 19 to 21.

Attendees last time signed deals worth $10 billion, most of them contracts with the Defense Ministry, while Prime Minister Vladimir Putin held a Cabinet meeting at the air show. It was not immediately clear whether Putin, who on Wednesday tried his hand as an archeologist at the excavation site of an ancient Greek port on the Taman Peninsula in the Krasnodar region, would attend the show next week.

The U.S. Air Force will fly several aircraft to the air show, including two A-10s, a C-130J Hercules and a couple of F-16C fighters. The Italian Air Force will perform flyovers with a C-27J Spartan transport plane.

Turning to the first-ever Russian contract with the U.S. Defense Department to supply 21 Mi-17V5 helicopters to Afghanistan, Petrov said Russian Helicopters would deliver the first nine aircraft by December and the rest would come off the assembly line next year. The Kazan Helicopter Plant is producing the helicopters, he said.

The contract, which experts value at $300 million, was signed in May.

As part of another ongoing contract, Petrov said his company has delivered several Mi-17V5 helicopters to India. That country agreed to pay $1.345 billion for 80 aircraft in 2008.

Speaking about the potential for future deals, Petrov said Russian Helicopters and a Chinese partner are putting together separate investment proposals to jointly produce a heavy helicopter based on the Russian Mi-26. The partners will then integrate their proposals and possibly form a joint venture, he said without naming the Chinese company.

"Progress has been evident here," he said.

The idea is to make the new helicopter less powerful than the Mi-26, which now holds the title of the world's heaviest lifter among commercially produced helicopters and is capable of carrying as much as 20 metric tons of cargo.

Another deal could come out of negotiations with a partner in South Africa to design an "African" helicopter based on the Russian Ansat model and produce it in that country under license, Petrov said.

Latin America, India and Southeast Asia have been the biggest foreign buyers of Russian helicopters.

Before it canceled its initial public offering on London and Moscow exchanges, Russian Helicopters was poised to become the first government-controlled defense contractor to go public, aiming to raise $500 million.

The IPO could have helped the company - which claims to be the world's No. 1 producer of attack helicopters and medium-and heavy-lift rotorcraft-to upgrade its Soviet-era factories and increase production.

Russian Helicopters was created by the government in 2007 to bring the country's helicopter makers into a single vertically integrated holding. It is 100 percent controlled by Oboronprom, another government-controlled holding unit.

The company, which completed consolidating helicopter makers in December, holds majority stakes in every major Russian helicopter maker, including Mil, Kamov, the Ulan-Ude Aviation Plant and the Kazan Helicopter Plant.

It produced 214 helicopters last year, up from 183 the year before, accounting for 13.5 percent of worldwide helicopter sales in value terms.