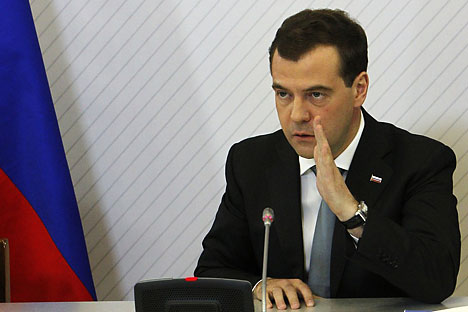 Made up of seven former Soviet republics, Russia, Armenia, Belarus, Kazakhstan, Kyrgyzstan, Tajikistan and Uzbekistan, the organization is aimed at countering external military threats and the defense of the territorial integrity of its member-states.

One of the key issues is the situation in North Africa and the Middle East. As Dmitry Medvedev pointed out ahead of the meeting, it “has a direct impact on the situation in the CSTO”. He also promised to “inform his colleagues about the mediation efforts” Russia is taking.

Another topic the leaders are likely to devote time to is the current state of affaires in Kyrgyzstan, which is still far from political stability after last year’s bloody popular uprising which ousted president Kurmanbek Bakiyev. As for Medvedev, he plans to discuss “major regional threats and the overall situation in the area”.

“Russia is interested in strengthening the CSTO potential,” the president stressed.

“In the light of world events, a military and political bloc should coordinate and even plan its activities,” he outlined. “The Muslim world is in turmoil, it is possible that the situation may be aggravated in our Muslim countries as well.  There are enough problems there.”

Lukashenko has always insisted that CSTO military forces should be used as peacekeepers on the territory of the organization’s members, if such a need arises. Last year he called for intervention into the Kyrgyz violence in order to help Bakiyev restore power. The other leaders did not support his stance, but Lukashenko still helped the ousted Kyrgyz president by giving him asylum in Belarus. Experts then said that the Belarusian leader was attempting to indemnify himself in case a similar scenario played out against him. Although Belarus is more stable politically than most Central Asian republics, discontent with the incumbent president has been gaining ground there, especially in light of the systemic crackdown on the opposition and the worsening economic situation. Experts believe that while in Astana, Aleksandr Lukashenko will also take a chance to talk about an economic bailout for Minsk.