In Russia, politics enters the Matrix 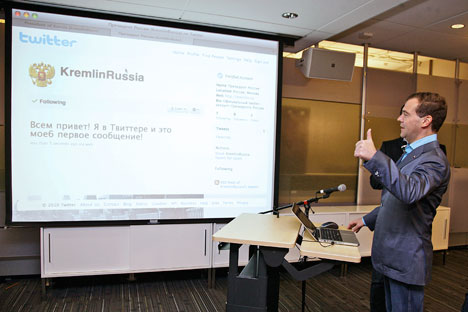 This year's campaign season has seen more battles being waged online, as politicians struggle to appear sincere while fighting off trolls.

Anna Stupina, the youngest Duma deputy of Moscow’s Northern District, is proud of the fact that she broke into politics when she was 21 entirely through social networking. “The most interesting thing about my campaign is that I haven’t spent a single kopeck, which is quite possible at the local level,” Stupina said.

Stupina is riding a new wave of successful political campaigning on the Internet. As the struggle for political power migrates to the virtual world, Russian politicians have turned social networks and their own websites into the new soapbox, the new town meeting, and the 21st-century walk-in office.

In 2011, almost one-third of Internet users described the web as an important source of political information, compared with less than 15 percent in 2007, according to Russian Public Opinion Research Center (VTsIOM). These numbers are nowhere near saturation, and the audience is poised to dramatically increase.

This year, the Internet has become much more than a campaign tool: Once in office, Duma deputies use the Internet as their virtual receptionist and home office. Many also use it to help bring constituents together around a single issue. For Dmitry Gudkov, leader of the youth wing of Just Russia party, “the Internet gives you direct access to the people, enables you to get feedback and react in real time.”

In May, Gudkov organized a rally demanding that the authorities deliver on a promise to provide apartments for military officers and their families after reports that some were still basically homeless. A thousand people turned up on Pushkin Square, and they got a swift response: “The head of the Defense Ministry’s housing department had to apologize and promise to rectify the situation,” Gudkov said.

Russia’s parliamentary elections are less than six months away, and experts say that this year’s campaign will play out in large part in the virtual world. Russia is still discovering how the Internet can be utilized—and manipulated—according to observers. Some of them stress that regulation should be the next step in online politics.

As of now, the political Internet in Russia “is partly regulated by the mass media laws and partly by election regulations. However, that is related only to the Internet sources that are registered as mass media,” said Andrey Sharomov, senior public relations director of the Grayling communication agency. “Blogs and social sites are regulated the least,” he said.

The blogosphere is one of the favorite playgrounds of “black PR” of Russian politics. The rules of the game in this sphere are not regulated by the law,” said Valery Sidorenko, an Internet/PR consultant in Moscow. Spam technologies such as bots, mailings, and fake bloggers riding top ratings are all utilized in an average “black PR” campaign.

The Russian government is working on measures to enforce Russian law on the Internet, according to Elya Ponomarev, co-chair of the information policy, communication and technology committee. A bill is expected to be finalized this fall.

The importance of being earnest

It was only three years ago that “politicians using the Internet targeted the media. Now they target voters,” said Alyona Popova, an e-government specialist.

At the same time, confidence in traditional media channels is waning. “Financial and industrial groups are buying up media conglomerates, which brings in an element of media manipulation,” according to Maxim Mishchenko, a State Duma deputy and leader of the Young Russia movement. “People no longer trust organizations; they trust the people within the organizations.”

Russian politicians have quickly gotten up to speed on how to market themselves. The most salient feature for a politician is to appear real, which is not a simple task. “In the 1990s, it was fashionable to hire PR managers and press secretaries to communicate with the general public. In 2011, a politician has to conduct communication via Internet himself,” said Mishchenko.

The secret to success on the Internet is to be informative. Moscow City Duma deputy Kirill Schitov said: “You have to write exclusive pieces yourself, give your assessment and thus provoke comments.”

Alyona Popova advises her clients to closely monitor their online presence and to watch out for trolls, who can create fake profiles to discredit public figures. “Fake accounts in social sites may hurt a politician’s reputation,” she said.

Additionally, the online audience loses interest once it detects a fake or the work of a brand manager instead of a politician. “There is a scramble to get into the top 10 to15 pages of LiveJournal,” said Gudkov. “Phony bloggers, who did not exist before the elections, top the ratings, but they command no trust among the public.” LiveJournal, the most popular social network of bloggers in Russia, has 4 million subscribers and 20 million monthly visitors.

This Spring, LiveJournal was under multiple hacker attacks that corrupted its operations and many blogs, including the blog of President Dmitry Medvedev, were unreachable. “This is a way to destroy the Live Journal and manipulate its readers,” said Elya Dronov, Director of Product Development at SUP.

“It is obvious that attempts are already being made to regulate the blogosphere,” said Valery Sidorenko. Dmitry Gudkov argues that any attempts to control what is going on in the Internet are doomed. “If the authorities shut down somebody’s blog, the blog becomes even more popular and interesting to people.”