Russian nuclear engineers are working as shock troops in India 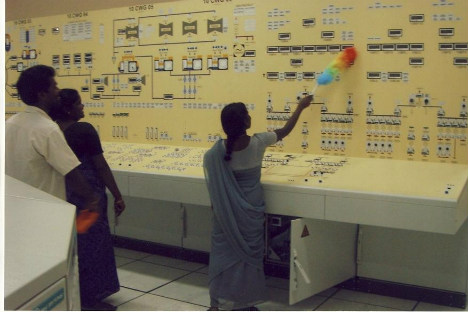 The final preparations are being made before nuclear fuel is loaded into the Kudankulam reactor, a nuclear power plant which Russia is helping to build in India. The first energy unit should installed by the end of the year. However, since a law was passed by Delhi holding the supplier responsible for any incidents, there is now a question mark over how the increased liability costs need to be apportioned. An Indian analyst claims the two countries are yet to come to an agreement. A Russian expert says the new legislation does not have a retroactive effect.

In 1988 India and the USSR signed an agreement over the construction of the Kudankulam NPP in the Indian state of Tamil Nadu. But construction was only started in 2002 due to the problematic transition period following the collapse of the communist state. According to RIA Novosti, the commissioning operations, which happen before fresh nuclear fuel is loaded into the reactor of the first energy unit, are now in their final phase. It is expected that the first unit will begin operation before the end of this year, and the second will be installed in 2012.

Although the disaster in Japan has somewhat cooled global enthusiasm for nuclear energy, people in Delhi are saying nuclear power is the only viable way forward. Apart from coal, India has no energy resources of its own. The Indian government therefore plans to build 30 nuclear reactors, and this will mostly be done in collaboration with foreign suppliers.

Russia is currently the only country building an NPP in India. How is Russia going to keep hold of its leadership in this field? The Indian market is important to Moscow. During a videoconference between Moscow and Delhi, the Director of the Centre for Energy and Security Studies and Editor-in-Chief of the Nuclear Club journal, Anton Khlopkov, said that over the next twenty years every other unit Russia builds abroad will be erected in India.

France, the USA and South Korea are all prepared to compete for contracts. But apart from potential competition, there is also a more serious obstacle impeding further progress in Indo-Russian cooperation. The Indian parliament has passed a law placing liability for any potential accidents throughout the reactor’s entire working life with those who built the reactor. This seriously increases the risks associated with manufacturing equipment for an NPP in India.

A Nezavisimaya Gazeta correspondent put a question to those who took part in the Moscow-Delhi videoconference, asking whether the new laws will apply to the Kudankulam NPP. This question is a difficult one. Documents concerning the creation of two new units were signed by both countries in 1988, 1998 and 2010. The two parties have supposedly come to an agreement that Russia will build another four units at Kudankulam.

But is Russia going to bear the additional responsibility that now comes with them? Alexander Putilov, Chancellor of the Department of Management and Economics of High Technologies at the National University MEPhI, said that the Indian legislation does not have retroactive effect according to international law. Consequently it should not apply to the two blocks that are currently under construction. Khlopkov acknowledged that the laws were a cause for concern for Russia. It’s not so much the cost of the projects that Russia is worried about, it is more the fact that the cost of electricity might rise for the consumer.

Dr Balachandran, Visiting Fellow at the Indian Institute for Defence Studies and Analyses, said that the 2008 agreement frees Russia from liability, but it is uncertain whether this goes for the 2010 document. Both documents are secret. Dr Balachandran suggests that there is some disagreement between the two parties. The Indians want to apply the 2010 agreement, whereas the Russians favour the document signed in 2008. In other words, the problem remains unresolved.

During the videoconference the two sides also discussed the implications of the latest resolution of the Nuclear Suppliers Group (NSG), which has more than 30 countries, including Russia, among its members. The NSG has imposed restrictions on access to sensitive technologies, such as the enrichment and treatment of uranium, for countries that had not signed the Non-proliferation Agreement.

India saw this as an example of “nuclear apartheid”. India sticks closely to international standards for limiting the transfer of sensitive technology. But Pakistan, according to Dr Balachandran, has not abided by these limitations. Another nuclear weapon possessor, Israel, is not interested in international collaboration in this field and consequently the sanction only affects India. As the discussions went on those involved in the conference came to the conclusion that the NSG sanctions apply to enrichment technology and the treatment of uranium, but do not stand in the way of constructing new NPPs. It does therefore affect the Indo-Russian collaboration programme for construction in the nuclear energy sector.